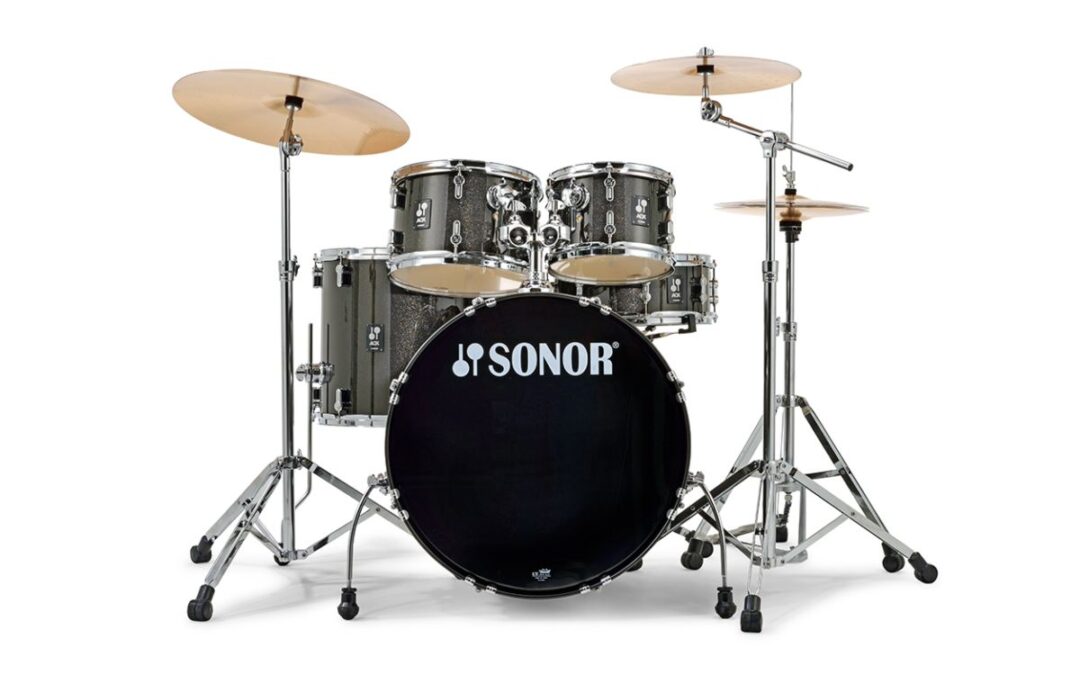 Recently, we have been sent a sizeable parcel from the official Sonor distributor in our country – the Musik Meyer company, containing a Sonor AQ1 drum kit. Already when unboxing and tuning the kit, it was clear we were in for quite a treat. 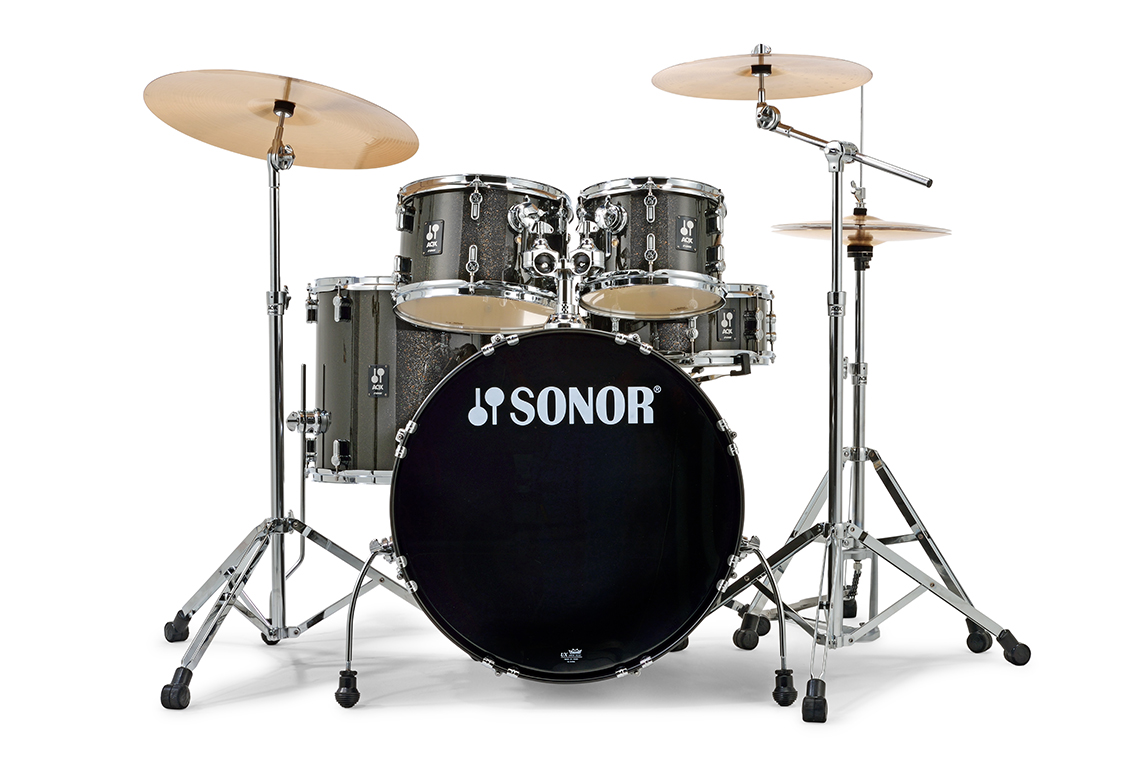 The test was carried out in our own recording facility. The kit is comprised of two rack toms, a floor tom, a snare and a kick drum, which were fitted with Remo UT Pinstripe heads. During the test, we also used a set of Sonor Cast B8 cymbals, which consists of a 14″ hi hat, a 16″ crash and a 20″ ride.

Max presented the sound of the bass drum, then, he played the snare (with the snares both disengaged and engaged), each of the toms separately at different levels of dynamics, only to finish off by playing some rhythm patterns using the entire kit. Since the producer has included the above mentioned cymbal set, Max concentrates on it in the second part of the video.

The set presents itself very well already at first glance. Attention to detail is noticeable and the finish looks very nice – the glitter is subtle and goes nicely together with the charcoal grey shade of the wrap. The finish could be compared to the Black Ice The aesthetic badge with the company’s logo and model name is a very nice accent. Tuning the toms was not a problem and the snare drum strainer worked flawlessly.

Sonor AQX Stage kits are available in three sparkle finishes. The finish on the kit we tested is Black Midnight Sparkle (BMS). The remaining two are: Dark Blue Sparkle (wrap), which could be described as glossy livid. When bathed in stage light, it will present itself very well. The remaining three are: Blue Ocean Sparkle (BOS), and Red Moon Sparkle (RMS). 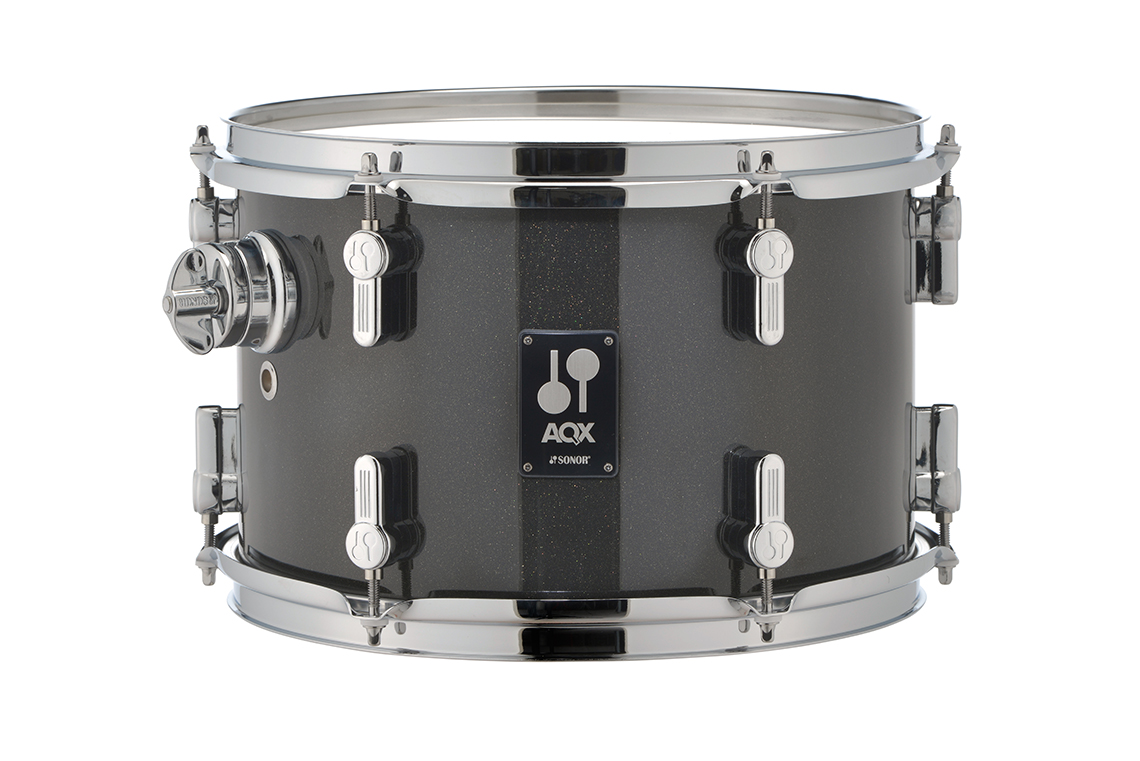 The sound of the set can be described as bright, modern, with depth and a clear attack. We have tuned the rack toms and the floor tom in such a way that displays the widest range possible (we think): from the 10-inch tom tuned relatively high to the floor tom tuned as low as possible. It quickly turned out that the drums perform well in all registers and are very flexible and responsive to tuning changes as well as dampening. The same goes for the snare drum, which also did not cause any problems while playing and tuning. It sounded full, bright and with sharp but non-overwhelming attack, which also encouraged playing rimshots to fully experience its character. The sound of the bass drum fits the toms very well, complementing them with strong and audible low end and (as it is the case with the entire set) bright and focused attack. In our opinion, Sonor AQX kits in the Stage configuration will do a great job in modern genres of popular music, from Fusion throught to Gospel, R&B and Metal. Drummers who prefer the softer side of the sonic spectrum should not give up on Sonor AQX drum sets either. All they need to do is try smaller shell sizes, i.e. Micro, Jungle, Jazz and Studio, taking into account the change of drumheads to, for example, coated single ones to soften their relatively sharp attack.

We must not forget the cymbals. We are talking about an entry level product. Although the logo does not look overly impressive, traces of hammering on the brilliant finish make these cymbals look very nice and serious. 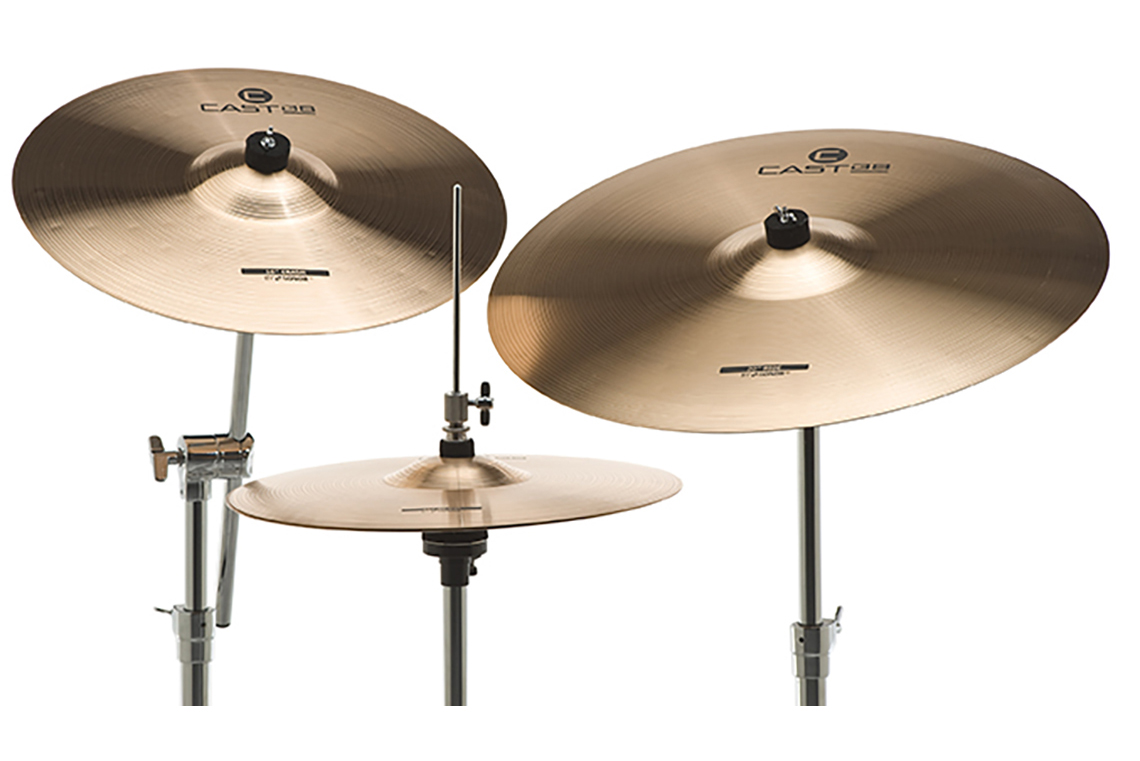 When it comes to the sound, of course we are dealing with the B8 alloy, so a clear sonic characteristic, with a lot of quite high overtones, which will not always be pleasant to the ear. Fortunately, the vast majority of them are. But you don’t have to worry about whether your Sonor B8s will cut through in the mix – there will be no problem with that. The 14-inch hi hat makes a particularly good impression here, as it has an appropriately loud “chick” and at the same time does not irritate the eardrums when it is wide open. The 20-inch ride produces a nice wash. When it comes to balancing the volume of the bell and body, it is also quite good. The cymbal is quite easy to crash, too. The 16-inch crash takes up most of the higher frequency band and is probably the least pleasant element of the kit, but we are generally not fans of crashes of this diameter and would prefer a set with an 18-inch crash. However, there is no doubt that Sonor Cast B8 cymbals make a strong competitor for such products as Meinl HCS, Sabian B8, Paiste PST-5, or Zildjian I.

Drummers and Drummerettes! It’s time to put the Sonor AQ1 Stage drum kit and a set of Sonor Cast B8 cymbals to the most important test of all, i. e. the en.beatit.tv viewers’ test! Exclusively for you, we give you Max Psuja!