Some time ago, we were sent a sizeable parcel from the official Sonor distributor in our country – the Musik Meyer company, containing a Sonor One of A Kind Bocote snare drum kit. Already when unboxing and tuning the instrument, it was clear we were in for quite a treat. 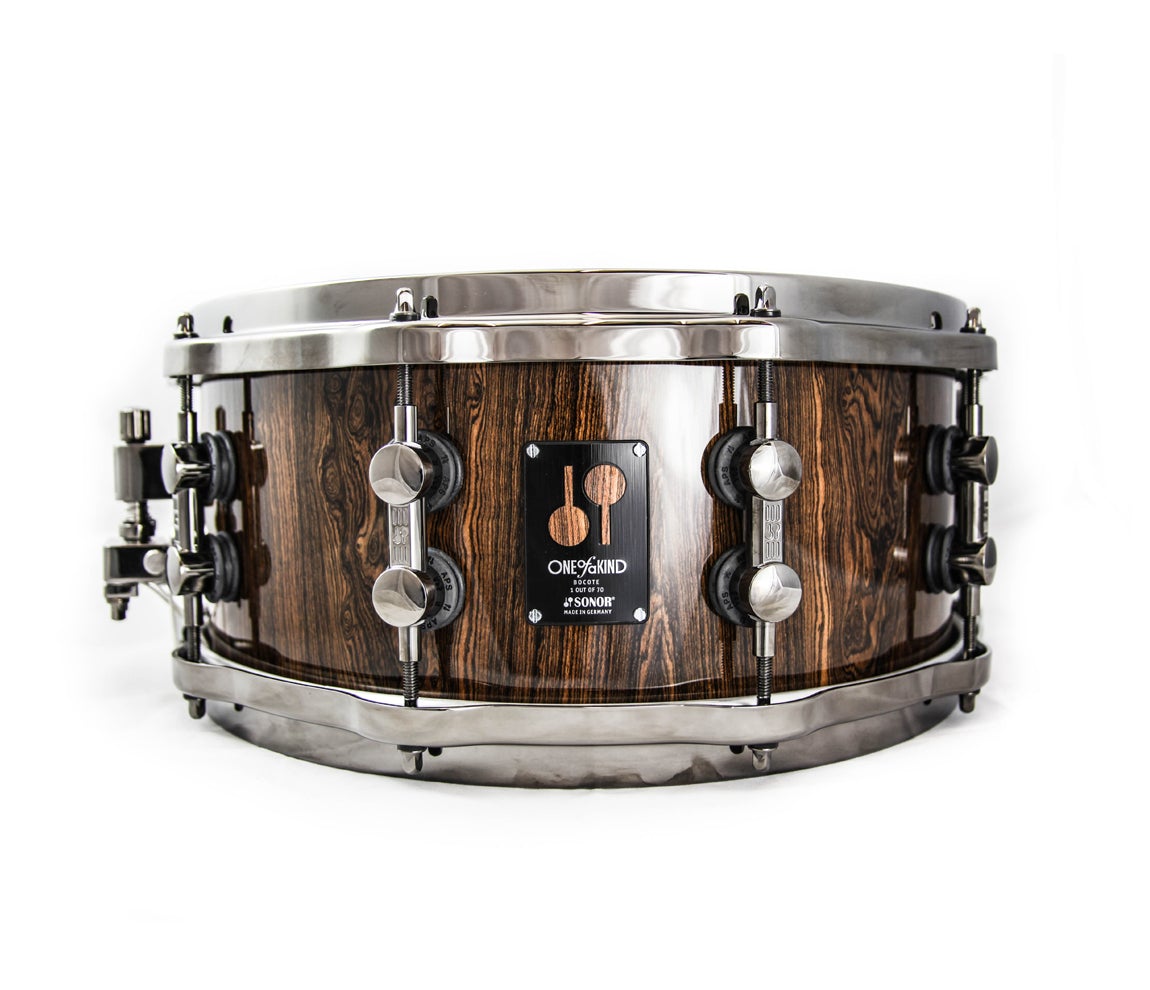 The test was carried out in our own recording facility. The instrument is fitted with Sonor heads by Remo. During the test, we also used a 24″ x 18″ DW Collector’s bass drum and a pair of 16″ Zildjian Sweet hats.

The Sonor One of A Kind 14″ x 6″ Bocote limited edition snare drum was released in 2017. There are only 70 of these available worldwide as they were all produced from a single specific tree and that is exactly what each edition from Sonor is limited to.

At first glance, the snare drum gives the impression not only of a solid construction (as it usually is in the case of Sonor products), but also a rather exclusive one. Upon careful inspection, we noticed some impressive details. A very interesting attribute of this limited edition snare is the Bocote veneer in high gloss lacquer finish blended with black chrome hardware is simply gorgeous! A wooden, laser cut badge highlighting the iconic mallet logo, made out of the same veneers used on the snare makes this snare drum all the more exclusive. The snare strainer and the butt plate work in perfect symbiosis, allowing the snare wires (18 brass ones) to be pulled smoothly and released quickly.

We tested the 14″ x 6″ Sonor One of A Kind Bocote snare drum using three types of tuning achieved with the help of a Tune-Bot device:

In each case, we played the instrument with the snares idle and strained, with a dampening ring on, and we presented the cross stick sound.

In terms of sound, the instrument leaves no doubt about its quality from at first contact. With the gentle taps of the fingers on the head, the snare drum was responding to the most delicate touches. The attack is very pleasant to the ear, and the dynamic range is quite wide, thanks to which the instrument nicely responds to ghost notes and faithfully renders all the notes in a tremolo. The sound is warm. The snare drum is quite loud and focused, even without dampening (although, of course, the latter gives more control over decay). We dare say that the sound characteristic is somewhere between modern vintage and modern. A nice and appropriately loud cross stick must also be considered an asset. It should also be noted that the snare drum does not choke when hit hard, from behind the ear, using rimshots. Quite the opposite, we would say it displays a whole new array of tones, harmonics and colours when played with this technique. It will certainly cut through the mix, and it will do so in a good way. We also deadened the sound (perhaps not completely, but close), the instrument works nicely in this sound option without losing its warmth.

It is a magnificent looking instrument, which is veeeeery versatile at the same time, both in terms of its sonic possibilities (great dynamics and attack in each tuning), and in terms of music styles – it will deliver in practically any genre of music.

Drummers and Drummerettes! It’s time to put the Sonor One of A Kind 14″ x 6″ Bocote snare drum kit to the most important test of all, i. e. the en.beatit.tv viewers’ test! Exclusively for you, we give you Max Psuja!