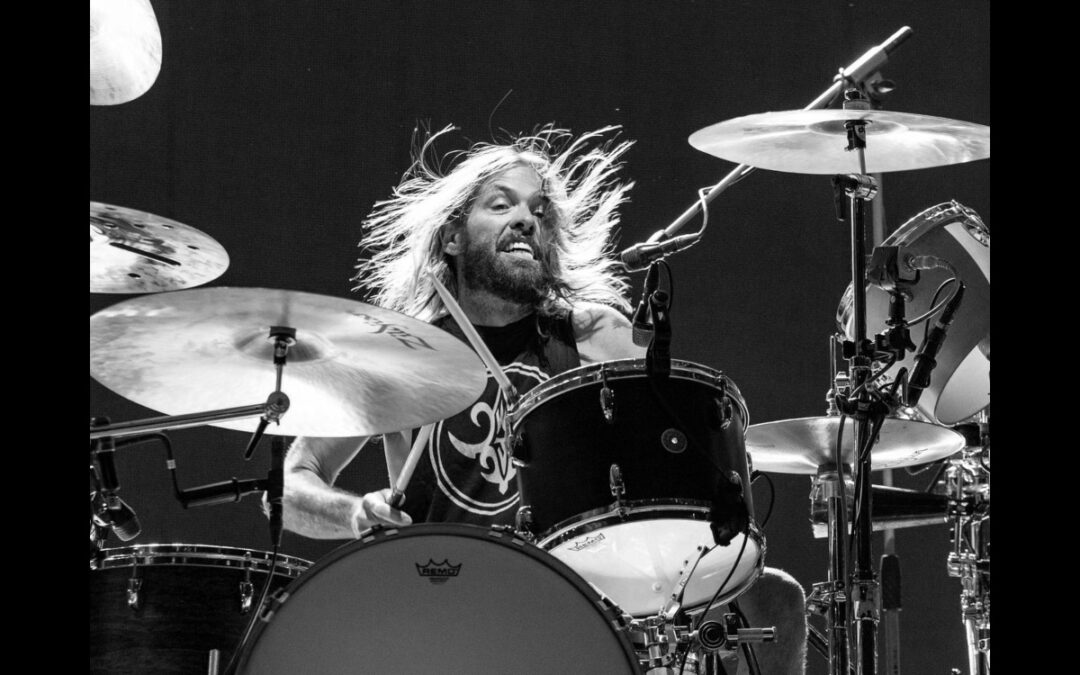 “The Foo Fighters family is devastated by the tragic and untimely loss of our beloved Taylor Hawkins. His musical spirit and infectious laugh will live on with all of us forever. Our hearts go out to his wife, children, and family, and we ask that their privacy be treated with the utmost respect in this unimaginably difficult time.” 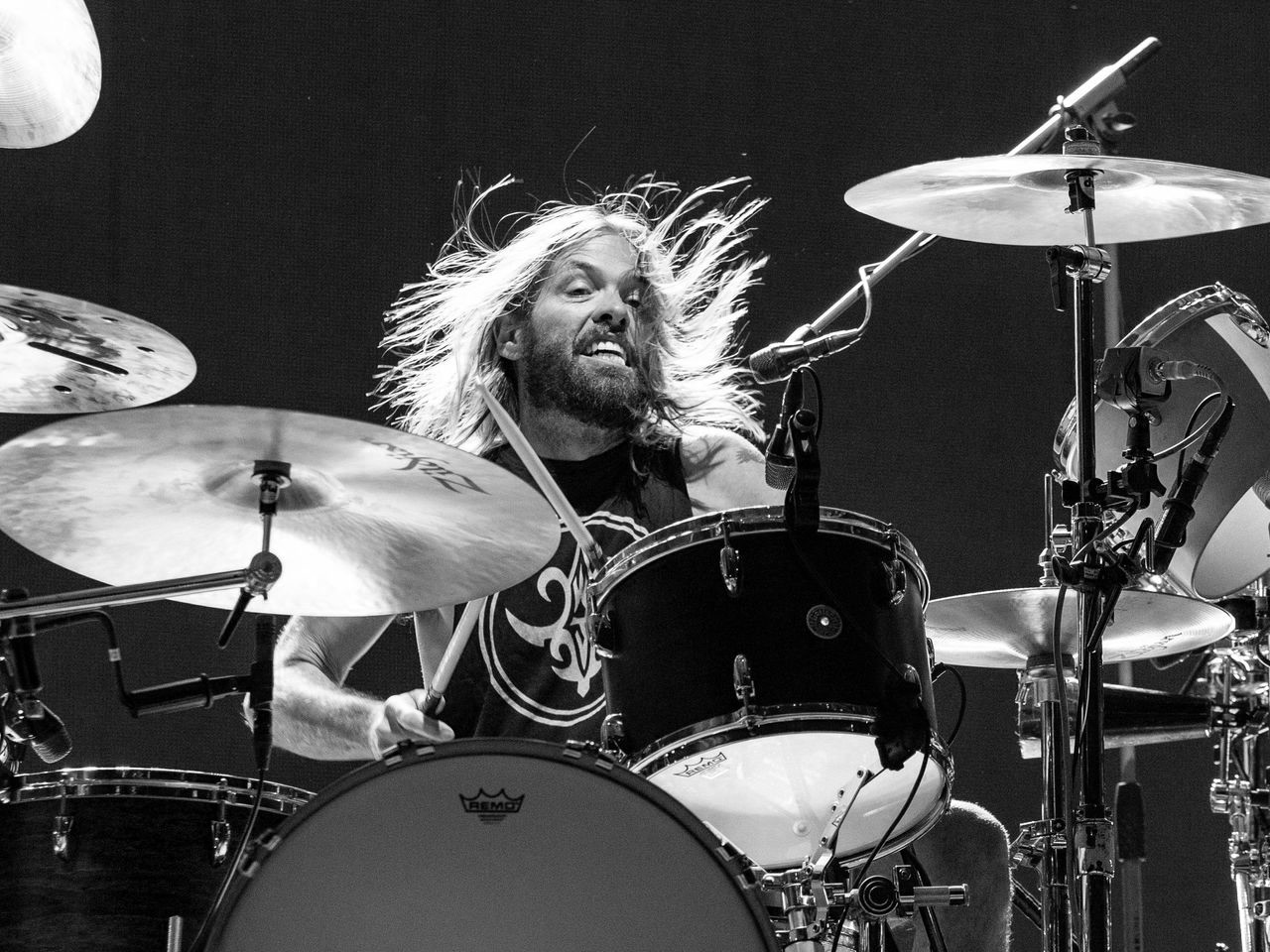 Oliver Taylor Hawkins was born in Fort Worth, Texas on February 17, 1972. His family moved to Laguna Beach, California in 1976, where he grew up. He attended Thurston Jr. High School and later Laguna Beach High School.

His parents bought him a drum kit when he was 10, which proved to be a pivotal moment: “I was a fat, chubby, stupid kid who failed at everything and whom nobody liked. Then I started playing drums. [my mother] was a big supporter and told me I’d make it. She counteracted Dad’s stony coldness, typical of a 1970s man.”

After leaving the Orange County-based band Sylvia (later emerging as ANYONE), he joined up as the drummer for Sass Jordan, which in turn he left to act as the drummer for Alanis Morissette. He appeared in her videos for “You Oughta Know” “All I Really Want“and “You Learn” off her breakthrough multi-platinum album “Jagged Little Pill” and was featured in the live band during the tour in support of the release. For this reason, he appeared on Morissette’s VHS/DVD Jagged Little Pill, Live (1997).

In 1996, during the recording sessions for Foo Fighters‘ second album, conflict reportedly erupted between Dave Grohl and the then drummer, William Goldsmith, eventually resulting in Goldsmith to leaving the band. The album was almost completely re-recorded with Grohl on drums. After the album titled “The Colour and the Shape” was released in May 1997, Grohl asked Hawkins to recommend a new drummer, and Hawkins volunteered himself. He subsequently joined the band, making his debut in time for the album’s release.

Hawkins was also an accomplished singer and writer. He had a number of side projects, which included: Taylor Hawkins and the Coattail Riders, The Birds of Satan, Chevy Metal, and a Police cover band alternately called “The Cops” and “Fallout”.

He sang lead vocals on the Foo Fighters single “Cold Day in the Sun” from the “In Your Honor” album as well as numerous covers done by the band, both in the studio and live.

Foo Fighters had been on tour with a show to be played in Bogotá, Colombia when, on March 25, 2022, Taylor Hawkins was found unresponsive by emergency services in his hotel room, where he had been suffering from chest pains. He was pronounced dead at the scene. The following day, Colombian authorities announced that a preliminary toxicology test indicated that Hawkins had ten substances in his system at the time of his death, including opioids, benzodiazepines and antidepressants.

Hawkins is survived by a brother, a sister, wife and three children.

Foo Fighters have already cancelled all shows this year. 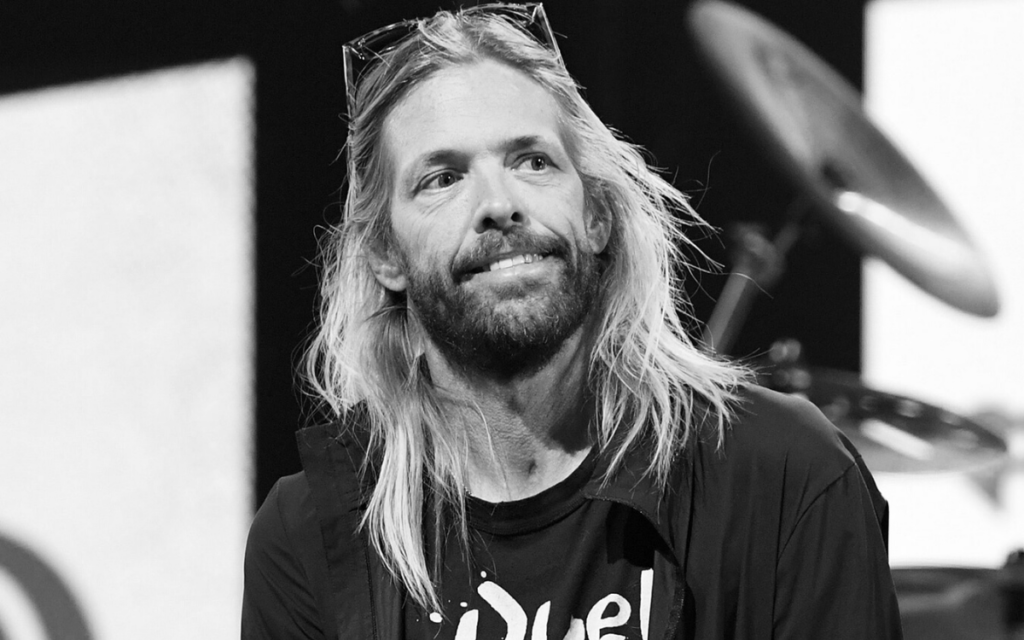 Taylor Hawkins was an official endorser of such brands as Zildjian and Gretsch Drums.

Here’s how Taylor described his role in Foo Fighters: “It’s Dave [Grohl’s] band, we’re all sort of members of Dave’s band. I just show up and do my job for the Foo Fighters. I play drums for the Foo Fighters and sing a little background vocals, dress up as a chick every once in a while in a video. We’re all kind of part of his musical vision. He’s the Brian Wilson and we’re the Dennis Wilson’s and Carl Wilson’s and Mike Love’s. Dave is very laid back and easy going and everything is kind of a goof. Dave’s a good guy, one of the few good guys in this business, he knows how to run it well. But it’s his band and he makes all the decisions and they’re all his songs.” 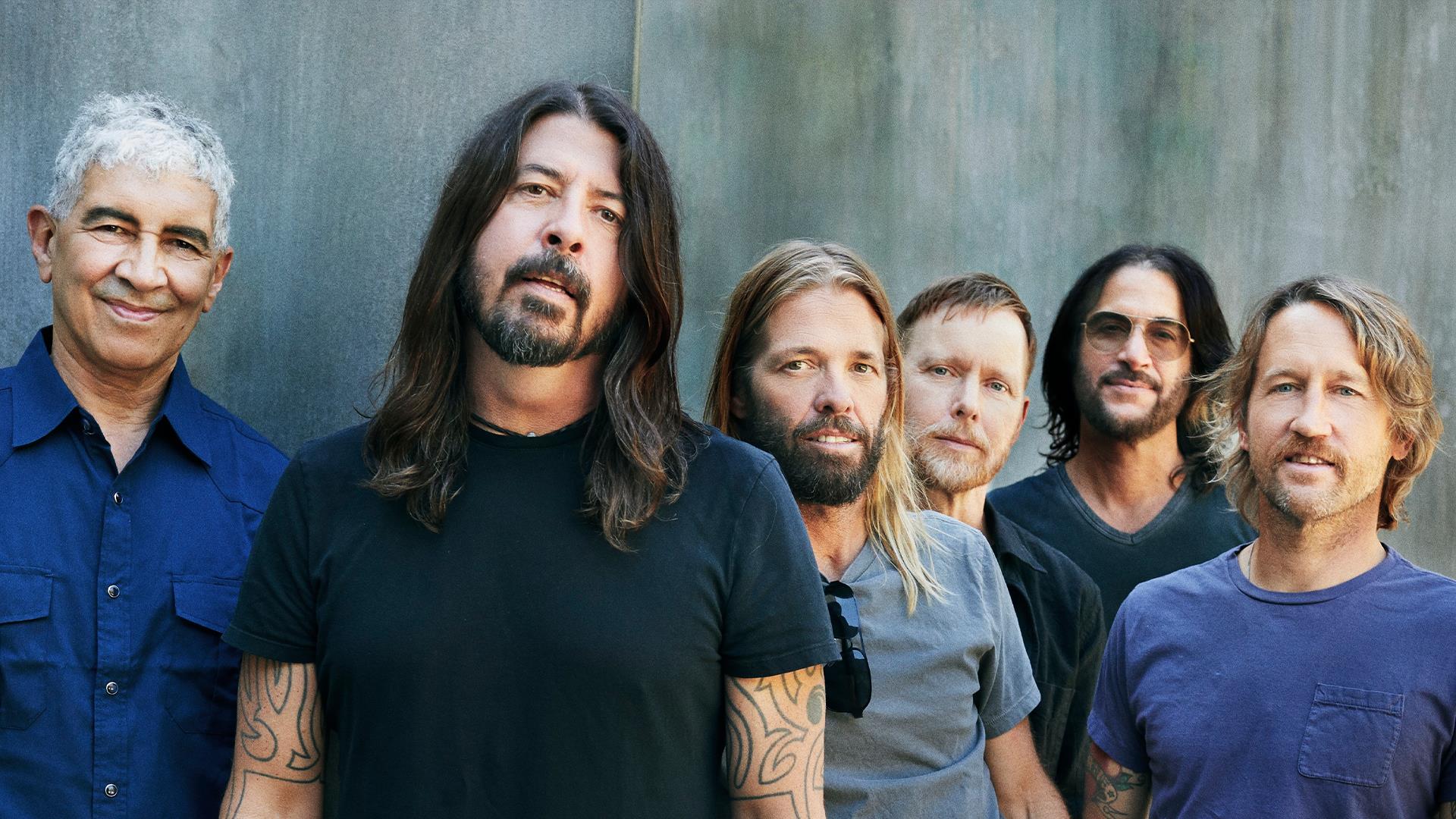 Kirsten Matt, Zildjian Artist Relations: “Scientifically, chemistry is defined as the study of substances. Musically, chemistry is defined as that standout, intangible “thing” that brings a band together and draws an audience in. In the Foo Fighters, that was Taylor Hawkins. Taylor’s first major touring gig was with Sass Jordan which led to touring with then up and coming Canadian singer, Alanis Morissette. Her popularity skyrocketed and for the next two years, the surfer kid from Laguna who loved rock’n’roll was on his way to being a rock star in his own right. When the opportunity to play in Foo Fighters came about, Taylor jumped at the chance. You could easily say he was obsessed with rock’n’roll. His heroes were the icons of the 70’s and 80’s, like Queen, Rush, The Police and Genesis and their influence was evident in his playing. Whether he was behind the kit or fronting his bands Chevy Metal or Taylor Hawkins and the Coattail Riders, he brought heat, humor and humility to the stage with him. He could rock a stadium one night and a pizza place the next. He could walk a red carpet and then show up at your door barefoot in board shorts. He was unapologetically honest and opinionated. And he was always trying to be a better musician. He was in the challenging position of playing drums in a band fronted by one of the most famous drummers in the world and he did it with grace, respect for his friend and front man, and with a smile that could light up the darkest arena. He will be missed by so many. We send our love to Taylor’s wife and children, to his band mates and his Foo Fighter family. To his fans around the world, play some Queen or air drum to “Tom Sawyer” in his honor.”

Drum Channel: “We are devastated to hear about the unexpected passing of legendary drummer Taylor Hawkins. His drumming influenced an entire era of drummers around the world, and he will be remembered as one of the greatest and most explosive rock drummers to have walked this earth. Our hearts go to his family and friends. RIP Taylor Hawkins.”
Modern Drummer Magazine: “It is with unspeakable sadness that Taylor Hawkins has passed away. He was an inspiration, great friend, unbelievable talent and world class person. Our condolences go to his family, band mates and friends. We’ve lost a true great far too soon.”
Paul McCartney: “Taylor’s sudden death came as a shock to me and the people who knew and loved him. Not only was he a great drummer but his personality was big and shiny, and will be sorely missed by all who were lucky to live and work alongside him. I was asked by the Foo Fighters to play on one of their tracks. It turned out that they wanted me to play drums – on one of Taylor’s songs. This request came from a group with two amazing drummers! It was an incredible session and cemented my relationship with Taylor and the guys. Later, they asked if I would induct them into the Rock and Roll Hall of Fame. I’ll never forget that night. All of which made it much more of a desperately sad shock to hear he had died. So thanks Taylor for sharing some glorious minutes with me. You were a true rock and roll hero and will always remain in my heart.”
Ringo Starr: “God bless Taylor peace and love to all his family and the band.”
Jimmy Page (ex-Led Zeppelin): “On this day I learned the sad news that Taylor Hawkins had passed. I had seen and heard Taylor play the drums many times with Foo Fighters – he shone within his powerful role in the band. After the Led Zeppelin show at the O2, I was invited to play at Wembley Stadium with the Foo Fighters on 7th June 2008. We played ‘Rock and Roll’ with Taylor on turbocharged vocals and Dave on drums and then for ‘Ramble On’ they swapped, with Taylor on drums and Dave Grohl on vocals. We put in some serious versions of these two songs. It was so good to play with him. I really admired him and he was a brilliant musician: his technique, his energy, and spirited enthusiasm.“

Ozzy Osbourne: “Taylor Hawkins was truly a great person and an amazing musician. My heart, my love and my condolences go out to his wife, his children, his family, his band and his fans. See you on the other side.”

Roger Taylor (Queen): “Like losing a younger favourite brother. He was a kind brilliant man and an inspirational mentor to my son Rufus and the best friend one could ever have. Devastated. Rog“

Lars Ulrich (Metallica): “Thank you Taylor. Thank you for always having the biggest, warmest smile on your face and for lighting up every room with your infectious energy and good vibes….Your phone call a week ago touched and inspired me, and I will always be appreciative for you championing our community as in your parting words…. ‘Drummers stick together!’ Damn right, brother. Except now the community is lesser without you.”

Phil Collen (Def Leppard): “Just heard the tragic news about Taylor and having known him for about 30 years this hit home pretty hard. Taylor was the sweetest, funniest guy so I watched with joy and excitement as he progressed from working in a local music store, to playing with Alanis Morissete and ultimately joining up with Dave and the Foos. His talent grew exponentially as did his success but he always remained just like that kid I would see at Laguna beach with his boogie board. He will be incredibly missed. Much love to his family and band mates.“
Rick Savage (Def Leppard): “I’ve just woken up to the horrible news of Taylor Hawkins’s passing. I’m in a state of shock and sadness. He was the epitome of the modern day rock star and an inspiration to kids everywhere, including this rather old one. Deepest sympathy to his family, friends and fans. Gone too soon but too good for us.“
Joe Elliott (Def Leppard): “I just woke up to my phone buzzing like crazy… I can’t believe it…. Farewell to THE best modern drummer & free spirit on the planet, I’m devastated.“
Roger Taylor (Duran Duran): “Greatly saddened to hear about the passing of Taylor Hawkins. Whenever I saw Taylor play it always struck me that he embodied the spirit of punk, coupled with amazing technique and ability. One of the last true ‘rock star’ drummers of our time. I was truly honoured when I heard that you were in the audience at our last show in Vegas. The Californian surf will miss you too Taylor!“
Travis Barker: “I don’t have the words. Sad to write this or to never see you again. I’ll never forget Laguna Beach days when I was a trash man playing in a punk-rock band and you were playing with Alanis. You’d come watch me play in dive bars and be like, ‘Kid, you’re a star.’ And I thought you were crazy, but you gave me so much hope and determination. Years later we toured together with Blink and Foo’s in Australia, and I have the best memories of smoking cigarettes in the restroom of flights we were on together and watching your set every night. To say I’ll miss you my friend isn’t enough.“ 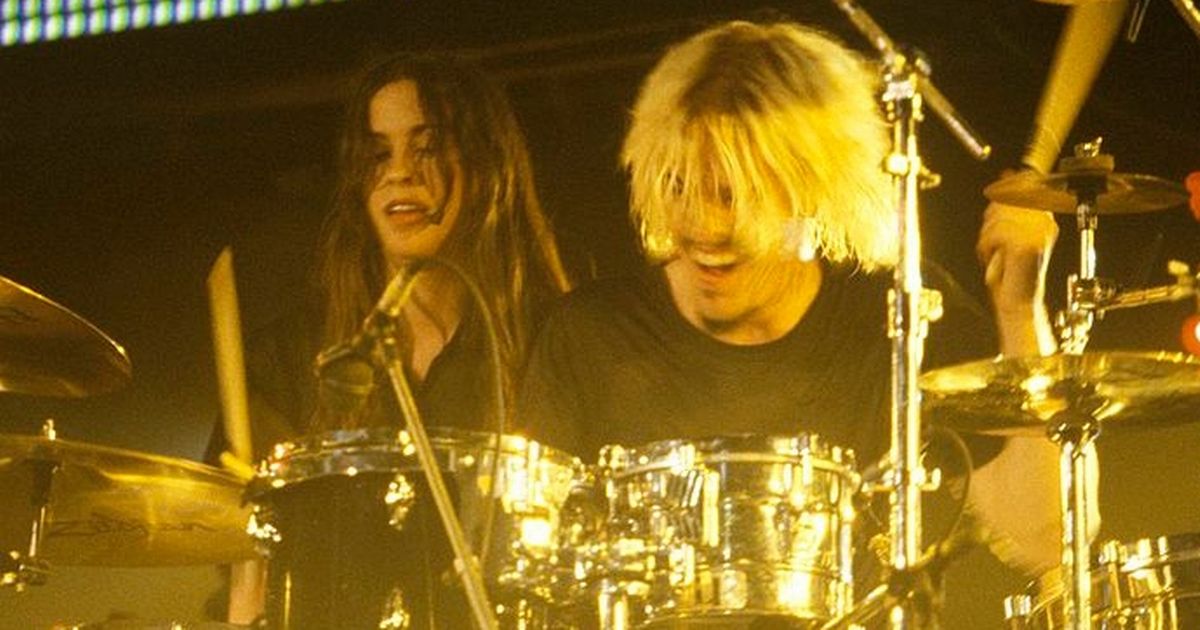