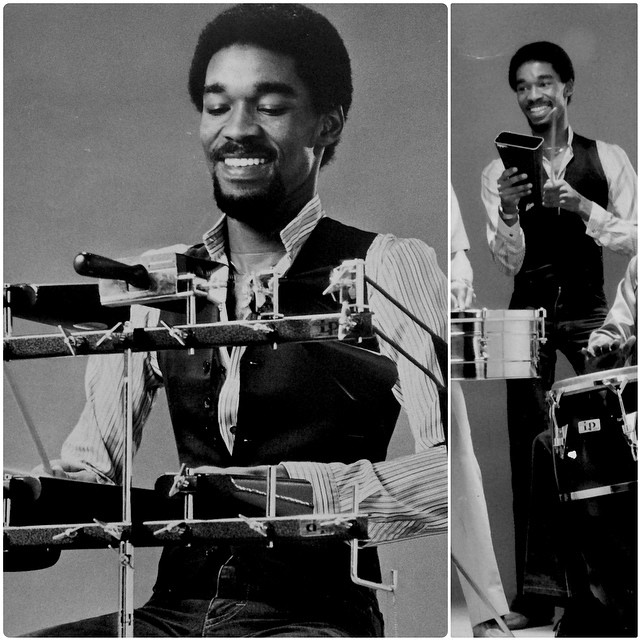 Being a drummer is not the easiest profession one can think of. Everybody knows the most attention amongst fans focuses on singers and guitarists while drummers usually have to set up at the back of the stage and are barely visible behind their kits. Obviously, there are some star drummers but – let’s face it – they just do not attract most of the audiences’ attention although their job requires finesse and the ability to drive a song and get the audience going. Thus, by definition, this profession is for those who do not expect to be widely loved, appreciated and adulated.

There are also those drummers who have proven their value as great musicians, have been appreciated by their colleagues, have played with the best groups and the biggest stars, nevertheless, the average audience member (often even the not-so-average-drum freak) doesn’t know their names even though he or she has heard those classic grooves and fills countless times. As if that were not enough, imagine being a drummer and enduring all those hardships in a communist-governed country in the 1960s, 70s and 80s. Those are the drummers we would like you to read about and listen to (there’s a lot more stuff on YouTube) in this article. To pick ten from thousands all over the world seems an impossible task, so treat this as a subjective tribute to all those masters in the background who never got quite the recognition they deserved for their skills…

Co-founder and original drummer for Simply Red. “What was it he played so greatly?” – one may ask. Whoever sits behind a drum kit and plays “If You Don’t Know Me By Now” with the same dynamic, sound and colour will have the right to say so, but my experience tells me that when they do, they won’t. All the others should know, if they don’t by know (pun intended) that the man, like many former English punks who started out in the late 70s, was greatly knowledgeable as far as classic soul and jazz was concerned. Here’s the best proof.

A student of Dennis Davis’s, who is number five on our list. Has collaborated with the likes of Cyndi Lauper, Duran Duran, Soul Asylum, The B52’s, David Byrne and David Bowie (1992 – 2004). Just listen to how nicely “China Girl” flows in this 2002 performance…

His real name was Ralph Gallant. He first started out as a session drummer for Motown, where he was filling in for one of the Funk Brothers – Benny Benjamin, who was recovering from a heart attack. It was then that he collaborated with the likes of The Supremes, The Temptations, Marvin Gaye, The Four Tops, Smokey Robinson or Wilson Pickett. Having moved to Nashville, he quickly became one of the most saught-after session aces on the country scene. He played and recorded with Elvis Presley in the final years of the latter’s career. Londin died in 1992 as a result of cardiac infarction he suffered after a drum clinic he had conducted.

English drummer, writer and producer. He started out in Germany, where producer Frank Farian hired him as a session drummer for a new project to be named Boney M. Consequently, he played on all the group’s classic albums and hits such as “Daddy Cool“, “Ma Baker“, “Belfast“, “Rasputin“, “Rivers Of Babylon“, “Gotta Go Home“. When working with producer Georgio Moroder, he played on some Donna Summer club recordings including “Bad Girls”. Later, he went on to co-write and co-produce with Moroder the 1983 smash “What A Feeling“. As a producer, writer and lyricist in his own right, he contributed to the successes of Billy Idol (the albums “Billy Idol” i “Rebel Yell“), Simple Minds (“Don’t You (Forget About Me)” and Limahl (“Neverending Story”).

The original drummer with Chic, who played on all the group’s hits (“Dance Dance Dance“, “Everybody Dance“, “Le Freak“, “I Want Your Love“, “Good Times“). As a session drummer, he laid drum tracks to such smashes as “We Are Family” by Sister Sledge, “Upside Down” and “I’m Coming Out” by Diana Ross, Madonna’s “Like A Virgin” and “Material Girl” as well as “Addicted To Love” by Robert Palmer. He was a member of The Power Station. On July 13, 1985, he supported the remaining members of Led Zeppelin during the Live Aid concert in Philadelphia (with Phil Collins as the other drummer). He was famous for his hard-hitting style of playing. Thompson died of kidney cancer in 2003.

Max Roach and Elvin Jones’ student, Sterling Campbell’s teacher. He started out with Clark Terry’s big band and later went on to work with the likes of Roy Ayers, George Benson, Stevie Wonder or Iggy Pop. In the period between 1975 and 1980, Davis played on all David Bowie albums, which means that classics such as “Fame“, “Wild Is The Wind“, “Heroes“, “Ashes To Ashes” or “Fashion” flow and groove so nicely thanks to his playing. His snare drum sound (created when working on the album “Low”) is considered one of the most influential in popular music. He supported David Bowie on numerous tours, both as a drummer and percussionist. Davis died of cancer in 2016.

Welsh drummer, who started out with the band Amen Corner, which had a number one hit with “(If Paradise Is) Half As Nice” in 1969. He is mostly known for his work with The Bee Gees in the period between 1974 and 1979, which means the whole world danced to his grooves at that time. Let me just name such titles as “Jive Talkin’“, “You Should Be Dancing“, “Stayin’ Alive“, “How Deep Is Your Love“, “Night Fever” or “Tragedy“. Bryon also co-produced Robin Gibb’s solo album titled “How Old Are You” and including the hit single “Juliet“.

Dennis Bryon’s Swedish counterpart. Together with bassist Rutger Gunnarsson, Brunkert played on all the ABBA albums. There were others in the studio (Roger Palm, Per Lindvall or Joe Galdo), but it was mostly his grooves that functioned as a basis for our parents’ and grandparents’ dancing stunts. He was also a member of ABBA‘s support band during all the group’s concert tours and important performances, i. e. the live performance of the hit “Waterloo” at the 1974 Eurovision song contest, the 1977 Australian tour and the 1979/1980 world tour. He died in 2008, from the injuries he sustained due to a fall in his own house.

They played drums and percussion on all the classic Earth Wind & Fire albums, which means they are responsible for all those mighty grooves laid to such timeless classics as “Fantasy“, “Shining Star“, “That’s The Way Of The World“, “September“, “In The Stone” or “After The Love Has Gone“. All there is to do is to listen to the over and over and marvel at their magnificence… Ralph Johnson remains active with EW&F. Maurice White died of Parkinson’s disease in 2016.

The drummer with the most popular band in history, who played everything their magnificent music needed in the drums department. It was the highest level of playing for the song, which isn’t appreciated by everybody the way it should be. If Alan White (since 1972 with Yes), who really knows how to make things complex, stripped his drum part in John Lennon’s hymn “Imagine” to the absolute necessary minimum, it is obviously a tribute to Ringo’s approach and style.