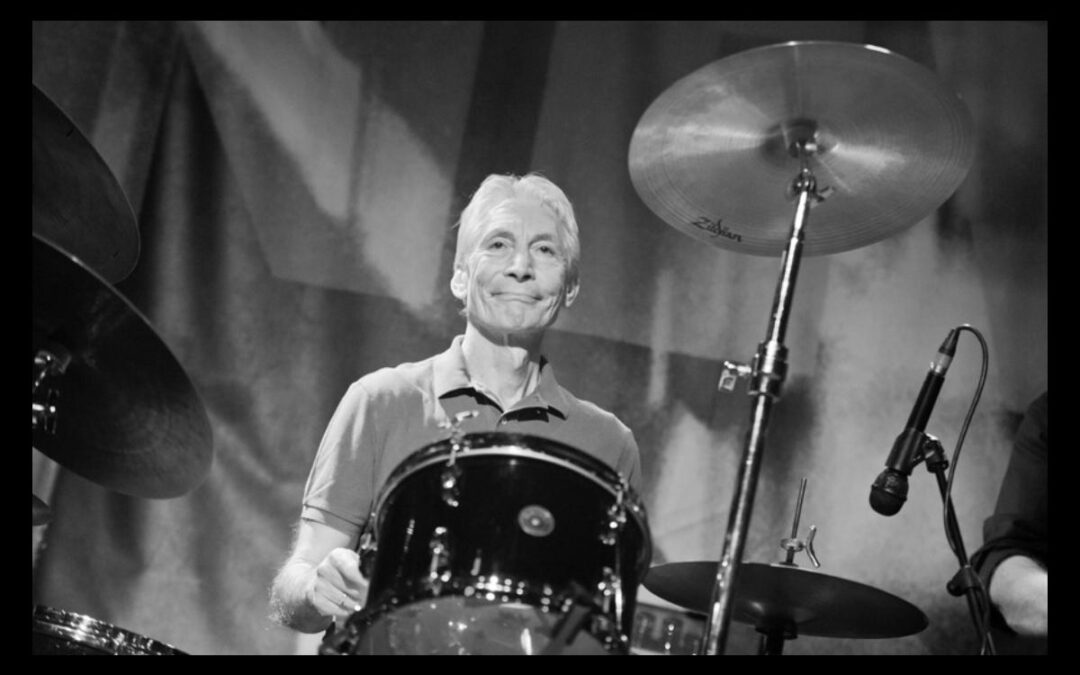 As it has been reported by the most reputable press agencies (Reuters, Associated Press) and news services (BBC, Sky News, CNN), Charlie Watts – the man behind the drums for The Rolling Stones since 1963 – passed away yesterday.

A statement issued by the artist’s spokesperson and posted on the band’s social media yesterday afternoon reads as follows:

“It is with immense sadness that we announce the death of our beloved Charlie Watts. He passed away peacefully in a London hospital earlier today surrounded by his family.

Charlie was a cherished husband, father and grandfather and also as a member of The Rolling Stones one of the greatest drummers of his generation.

We kindly request that the privacy of his family, band members and close friends is respected at this difficult time.”

The news comes three weeks after the announcement of Charlie Watts being forced to miss the Stones’ US tour dates in order to recover from an unspecified medical procedure with Steve Jordan standing in. Watts previously underwent a treatment for throat cancer in 2004.

Paul McCartney: “So sad to hear about Charlie Watts dying. He was a lovely guy. I knew he was ill, but I didn’t know he was this ill, so lots of love to his family, his wife and kids and his extended family, and condolences to the Stones. It’ll be a huge blow to them because Charlie was a rock, and a fantastic drummer, steady as a rock. Love you Charlie, I’ve always loved you. Beautiful man, and great condolences and sympathies to his family.”

Pete Townshend (The Who): “Charlie Watts wept at Keith Moon’s funeral. I wish I was capable of such tears today. Instead I just want to say goodbye. Not a rock drummer, a jazz drummer really, and that’s why the Stones swung like the Basie band!! Such a lovely man.”

Elton John: “A very sad day. Charlie Watts was the ultimate drummer. The most stylish of men, and such brilliant company.”

Glenn Matlock (Sex Pistols): “[he] kept the beat to the soundtrack of our lives.”

Joan Armatrading: “Why am I crying? Because Charlie Watts has died. Who knew that any of the Rolling Stones musicians would ever leave this earth.”

Curtis Stigers: “My mom always claimed I was conceived during the chorus of Satisfaction by The Rolling Stones. Thank you, Charlie Watts. I owe you my life.”

Stuart Copeland (The Police): “So sad to lose a unique, iconic drummer. He was a quiet giant.”

Jim Keltner: “I can just only tell you that Charlie was as dear a friend as anyone could ever hope to have. We all are going to miss him terribly! Our great drumming community is gradually thinning out. That’s the way this is all designed. It still really hurts, though.”

Vinnie Colaiuta: “We must eulogize our heroes, those that shaped our lives indelibly. Charlie, with The Stones have been a soundtrack for the lives of several generations. I can remember the first time I heard the enormous ‘Honky Tonk Woman’ intro. I’m instantly taken back to a summer day in my childhood walking home with a portable radio, and heard that. The last time I saw him live was in 2015 at Petco Arena in San Diego. He gifted me his drumsticks from that show. I cherish them. Nobody could do what Charlie did, the way that he did it. If I have to think of the ‘Gentlemen’ of the drums, I think of Charlie, and Papa Jo Jones. The way they carried and presented themselves. Charlie was a gentleman of the drums, and a true Gentleman as well. With poise and dignity. Here is another ‘end of an era’, sadly. Let his legacy and all that he represented and showed us continue to shape us, and generations to come. Rest In Peace, Sir.“

Lars Ulrich (Metallica): “It hits hard on many levels. Obviously, as a Stones fan, it’s sort of the end of at least an era within that band, because he was the only drummer that ever recorded with them. He was such a significant part of their sound, and an underrated part of their sound. In a band where the spotlight would go to especially Mick and Keith, a lot of people truly didn’t understand how valuable he was. Charlie has always been that driving force. […] People sit there and go, ‘Yeah, I’m dancing along with Mick Jagger.’ No, you’re dancing along with Charlie Watts in the same way Mick Jagger’s dancing along to Charlie Watts’ drumming. So Mick Jagger wouldn’t have those moves if it wasn’t for Charlie Watts’ drumming. It sort of starts and ends there.”

The most important (and awaited) tributes came during the night and morning hours CET.

Mick Jagger and Keith Richards honoured their bandmate and friend with one photo each, no captions:

Ronnie Wood posted a photo depicting Mr. Watts and himself with the caption: “I love you my fellow Gemini~ I will dearly miss you ~you are the best.” 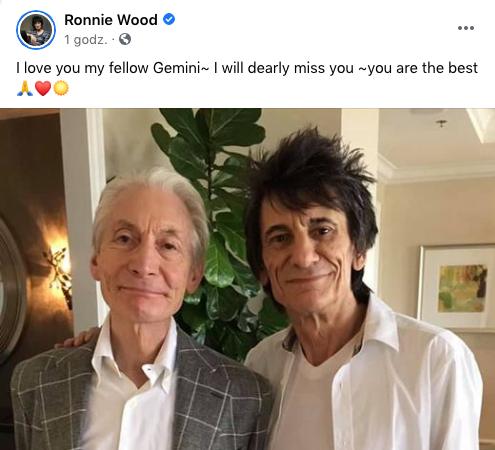 Darryl Jones, the Stones’ bass player since 1994, wrote this on his FB account: “I am deeply saddened to have been informed that Charlie Watts has died. I appreciate all the kind words and thoughtful sentiments I’m receiving. My heart goes out to Charlie’s family and wealth of friends and fans grieving his passing. Though he had not been well it is nonetheless a tremendous shock to hear this sad news. I’ll have more to share soon. I’m just trying to wrap my head and heart around this loss. I’m sure you all understand.”

Bill Wyman (the band’s original bassist): “Charlie, you were like a brother to me. In the band and in life. Rest in peace.”

Chuck Leavell (the Stones’ longtime keyboard player): “I am devastated at the passing of one of my heroes, one of my peers. There has been no man more effortlessly elegant and more beautiful than Charlie Watts. His timing and beat was always impeccable, his touch delicate yet stabilizing, powerful. On stage, I would stare at his face and marvel at his ability to be the coolest cat among the coolest cats around. It has been the honor of my life to have played with him in studio and in concert over the last 40 years, and to have called him a friend. RIP Charlie. I miss you already.” 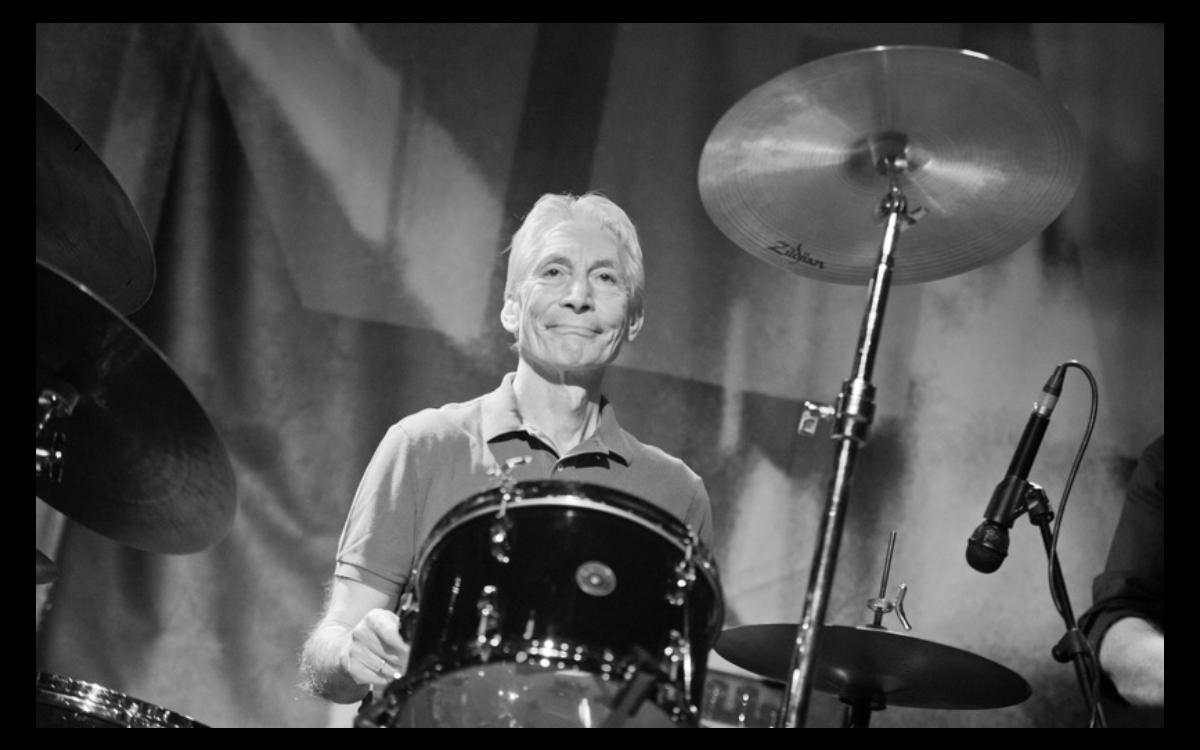 Charles Robert Watts was born on June 2, 1941, in London, England. He grew up in Wembley near London as the son of a truck driver.

Around the age of ten, Watts discovered jazz and blues music. Miles Davis and John Coltrane were two of his early influences. He started playing music on his own a few years later, converting a banjo into a snare drum. Watts’s parents gave him his first drum kit in 1955, and he would practice drumming along with jazz records he collected. His childhood friend and neighbour Dave Green, who went on to become a successful jazz bass player, recalls: “We discovered 78rpm records. Charlie had more records than I did. We used to go to Charlie’s bedroom and just get these records out.” Those were jazz recordings by Jelly Roll Morton, Charlie Parker and Thelonious Monk.

But music was just a side interest for Watts at the time. He left school at 16, and then studied at the Harrow School of Art. After leaving art school, he worked as a graphic designer for an advertising company called Charlie Daniels Studios.

He began a professional musical career in 1958, playing in a jazz band called the Jo Jones All Stars. In 1961, Watts joined Alexis Corner’s band, Blues Incorporated, giving up a career as a graphic designer in Denmark, but he maintained a job with another advertising firm of Charles, Hobson and Grey. It was in mid-1962 that Watts first met the members of The Rolling Stones but turned down their offer to join the band. He eventually did so in January of 1963. The rest is history…

He was famously a media-shy, private, modest and quiet person. When asked what he felt when The Rolling Stones started being called ‘The Greatest Rock ’N’ Roll Band In The World’, Watts said: “I didn’t believe it. What about Little Richard? Then you have Dave Bartholomew and Fats Domino, Chuck Berry’s studio band – there isn’t a better rock ’n’ roll band. […] That’s where we got it from.” When asked whether he was going to write a memoir (like Keith Richards had done), he replied: “No. I wouldn’t know what to say. I’m very private. I wouldn’t want to talk about half the things, and I forget a lot. I’m not really that interested in talking about me… me and the Rolling Stones, actually.”

He is survived by his wife Shirley, daughter Seraphina and granddaughter Charlotte.