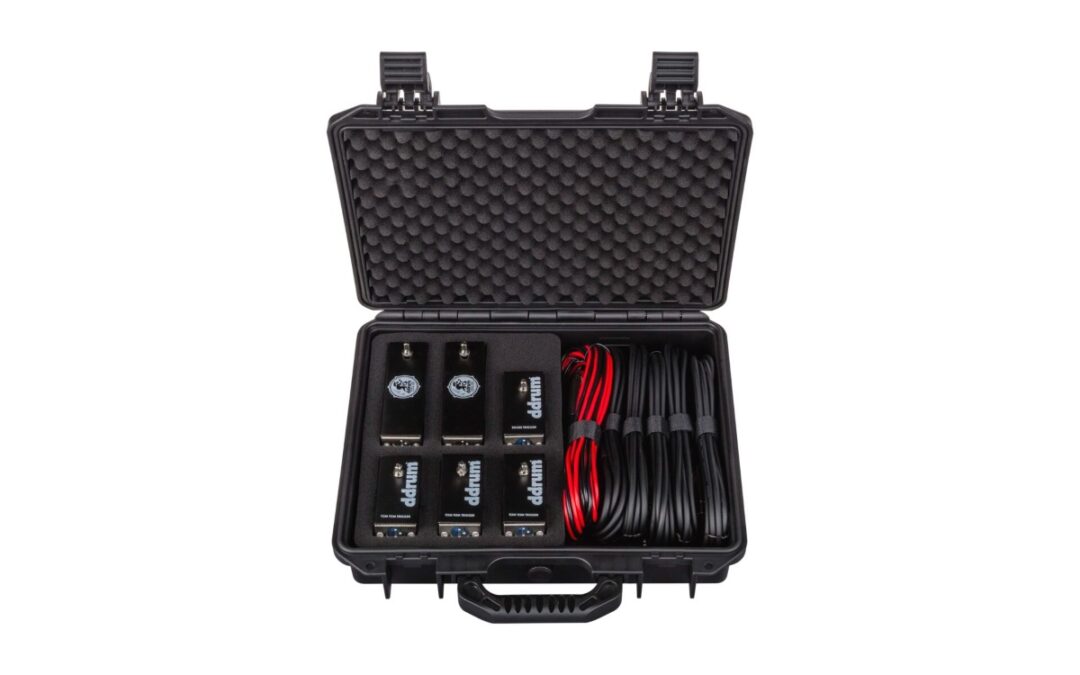 At the time of his death in 2018, Vinnie Paul had already been playing acoustic drum kits from ddrum for 10 years and, though he preferred the organic sound of his drum kit in the studio, he regularly used triggers live to beef up his sound against guitars and bass. 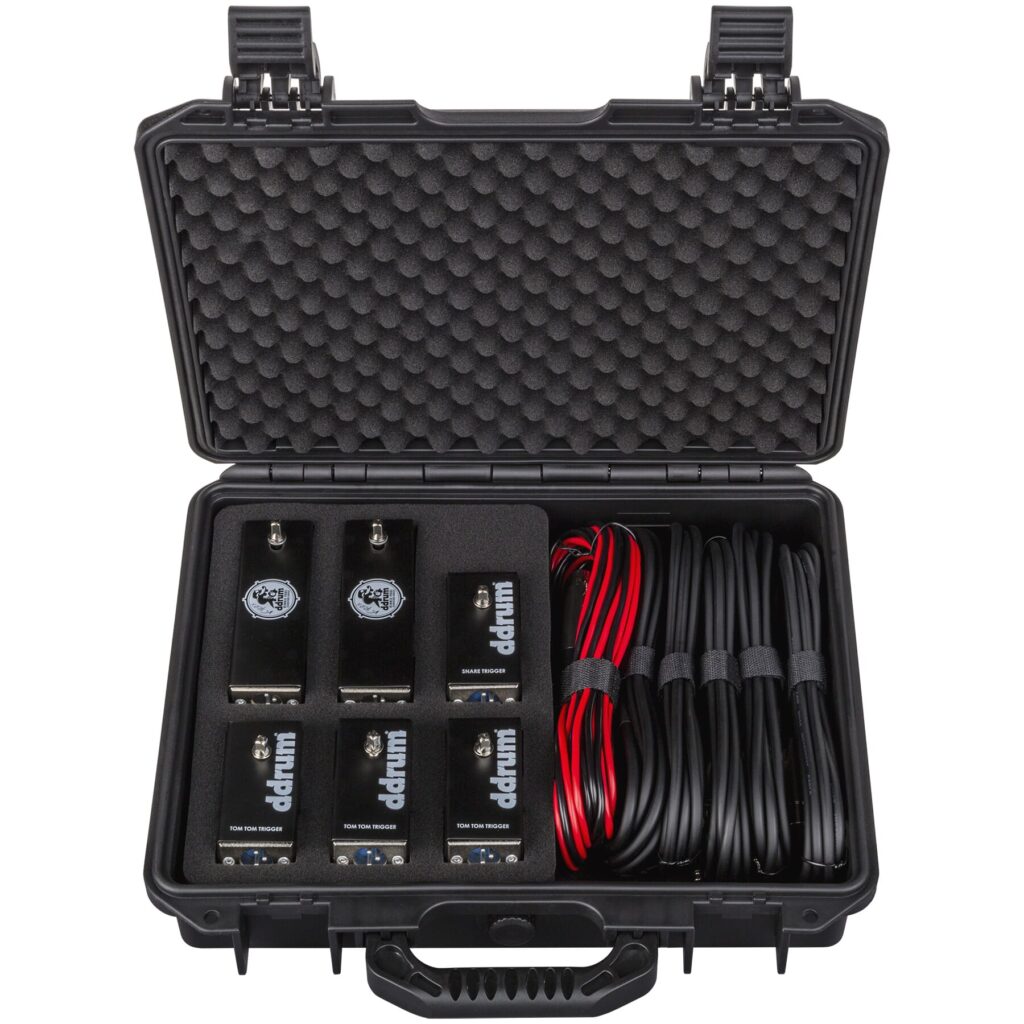 Now, in 2022, ddrum – one of the pioneers of electronic drum kits and triggers – have announced the launch of a new series of drum triggers bearing the Vinnie Paul signature.

These triggers feature a metal casing in a form similar to the Acoustic Pro series by ddrum. Its Satin Black finish is complemented by a white “Vinnie Paul” logo and a characteristic graphic. The ddrum company says that these devices are equipped with improved sensors of increased sensitivity and a safe ddrum XLR output.

The triggers are offered individually: 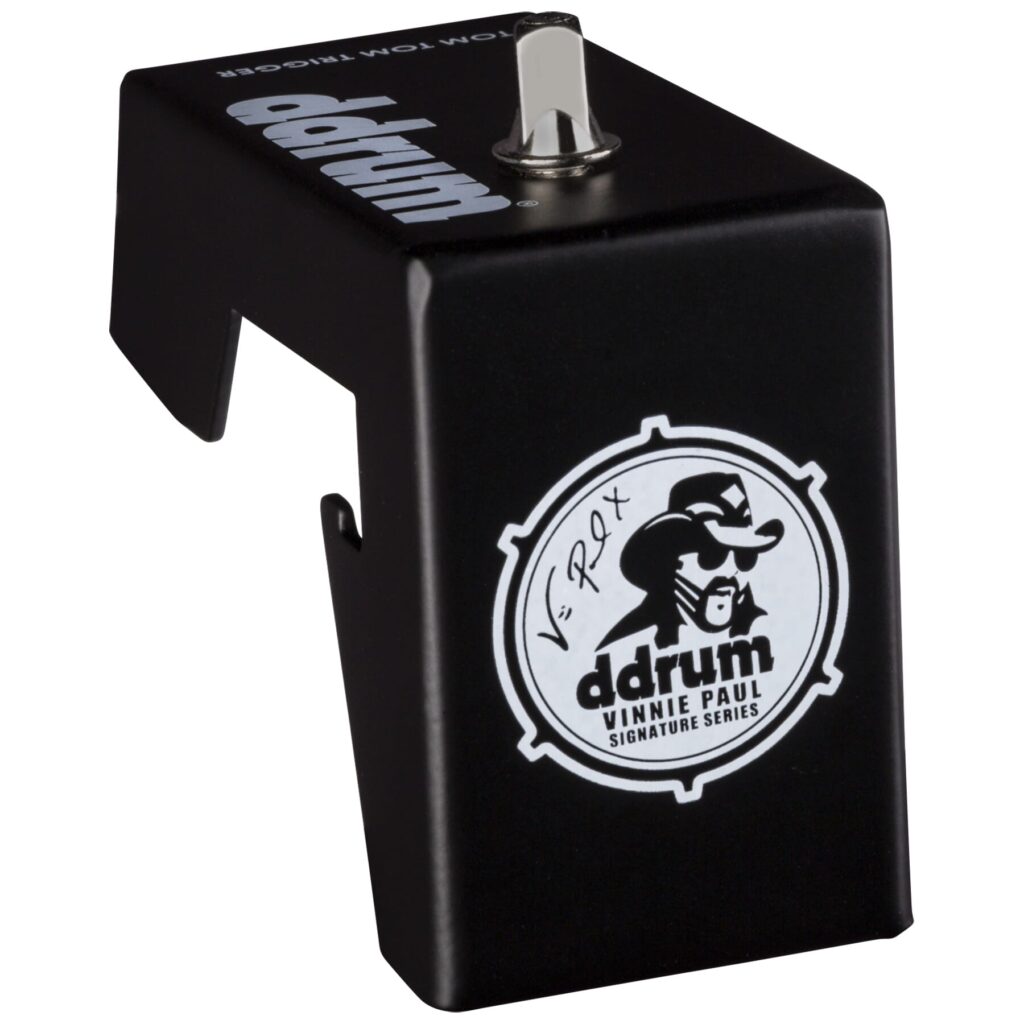 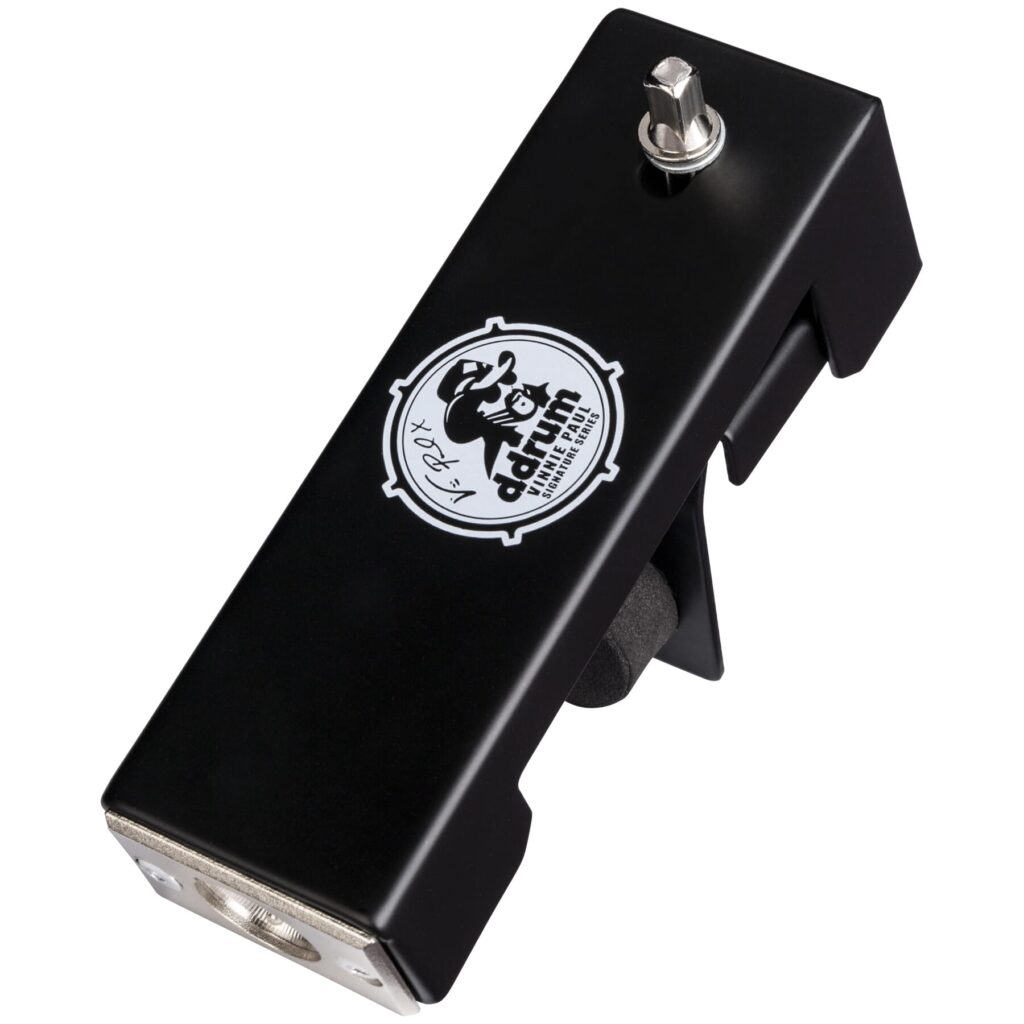 or as a six-piece Tour Pack consisting of a snare drum trigger, 3 tom triggers and a pair of kick triggers, plus a Y cable for the trigger snare drum, 5 ddrum 6999 XLR cables and a hard-foam padded shell case.

“I’ve learned over the years that nothing beats the sound of triggered drums mixed with real tones coming out of a PA system. – Vinnie told Modern Drummer magazine in 2010.

“I still like the top end of the real drums because it’s so much more real sounding then if you use just triggered sounds by themselves. Those can sound like a computer: ‘dat, dat, dat, dat, dat.’” 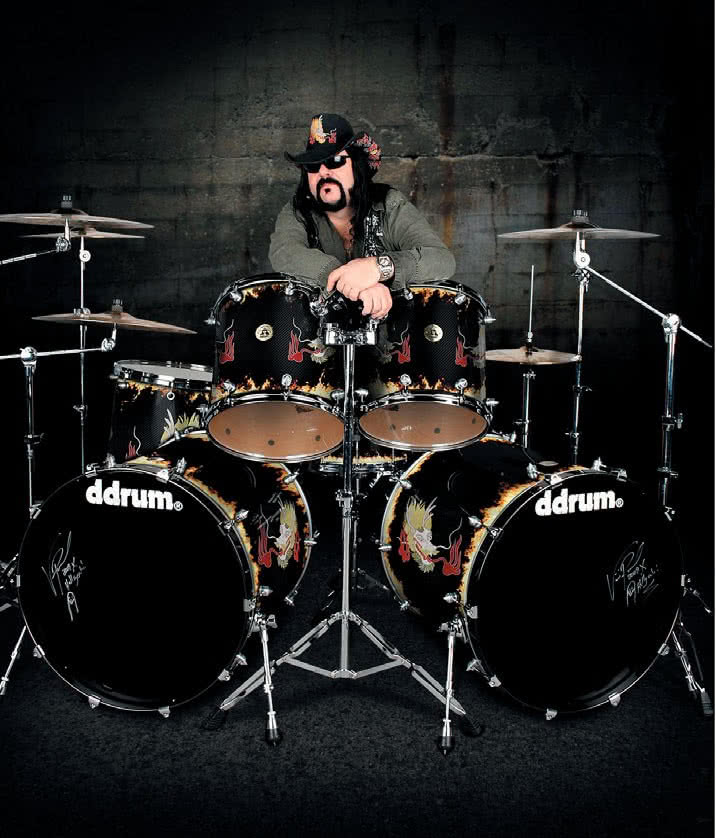 Vincent “Vinnie Paul” Abbott (1964-2018) was an award-winning drummer born in Abilene, Texas, USA, to country songwriter and producer Jerry Bob Abbott and Norma Carolyn Adkisson. It was the father who encouraged the boy to switch from playing the bass horn to drums. Young Vinnie lived in the small, quiet town of Dalworthington Gardens and attended James Bowie High School in Arlington, where he played in the school’s drum line. He was influenced by ’70s drummers, such as John Bonham from Led Zeppelin, Keith Moon from The Who, Neil Peart from Rush, Peter Criss from KISS and Alex Van Halen from Van Halen.

In 1981, Vinnie Paul founded Pantera in Arlington, Texas, with his guitarist brother Darrell “Diamond” Lance Abbott (later known as “Dimebag”). Several members of the heavy metal / glam metal band had to be replaced before releasing three albums, with Terry Glaze on vocals and Rex Brown on bass guitar. Jerry Abbott recorded and produced the albums: “Metal Magic” (1983), “Projects in the Jungle” (1984) and “I Am the Night” (1985) at Pantego Sound Studio in Arlington and released them on the band’s Metal Magic Record label.

The drummer spent extra time in the studio and learned the art of recording from his father, whom he would later emulate. In early 1987, Terry Glaze was replaced by a new energetic vocalist named Phil Anselmo from New Orleans, Louisiana. The release of “Power Metal” (1988) marked a clear shift towards a heavier rock sound later known as “power groove”. Vinnie Paul handled the group’s business, but in 1989 the band teamed up with Walter O’Brien and Concrete Management, who served as their management until 2003.

Pantera were signed to Atco Records in 1990, and the first release after that was “Cowboys From Hell” (1990), which gained attention in the US thanks to the singles “Cemetery Gates” and “Cowboys From Hell“. Between 1990 and 1992, Paul played a six-piece Tama drum kit, which included two bass drums. At that time, he used Sabian cymbals and Vic Firth sticks (the company made a signature stick model for him).

The band gained popularity in the 1990s, switching to thrash / groove metal and eventually selling over twenty million records. The subsequently released albums were “Vulgar Display of Power” (1992) and “Far Beyond Driven” (1994). They both debuted at number one on the Billboard 200 chart. Vinnie Paul switched to Remo drums and skins during the recording sessions and when touring these albums. These three Pantera albums eventually went platinum.

Pantera became known in the rock music world thanks to its alcohol-fueled parties, both when on tour and after returning home. The brothers consumed and popularized the alcoholic drink known as the “Black Tooth Grin”, which consisted of Crown Royal whiskey or Seagram 7 and Coca-Cola. In 1995, singer Phil Anselmo began to struggle with addiction (painkillers and heroin), which created tension in the band.

Abbott and his brother built their own recording studio called Chasin ‘Jason Studios in the backyard of Darrell’s house in Dalworthington Gardens, Texas. Pantera released “The Great Southern Trendkill” (1996) torn by internal conflicts and poor communication within the band. Between 1996 and 2008, Paul was endorsed by Pearl Drums. It was then that they developed the characteristic signature snare drum with a snakeskin finish.

Pantera released their last album “Reinventing the Steel” in 2000 and played their final concert in Yokohama, Japan on August 26, 2001. The band officially disbanded in 2003 after years of tension between Phil Anselmo and the Abbott brothers duo.

In 2003, the drummer teamed up with his brother Dimebag, Bob Zilla and Pat Lachman to found the band Damageplan. They released the album “New Found Power” (2004) and embarked on a promotional tour. On December 8, 2004, a deranged Pantera fan shot Dimebag Darrell Abbott onstage at the Alrosa Villa nightclub in Columbus, Ohio. Damageplan dissolved shortly after. Darrell’s death had a profound effect on Vinnie Paul, who took an eighteen-month break from making music. His irreversible falling out with Phil Anselmo sealed the fate of Pantera, despite constant encouragement from fans.

Paul founded Big Vin Records in February 2006 and co-wrote the monthly Q&A column with Cristina Scabbia of Lacuna Coil for Revolver magazine. In the same year, he joined the heavy metal band Hellyeah, which featured Chad Gray and Greg Tribbett from Mudvayne as well as Tom Maxwell from Nothingface. They  signed a deal with Epic Records, which led to releasing two albums: “Hellyeah” (2007) and “Stampede” (2010). In 2008, Paul started working with the following brands: Evans (drumhead manufacturer), Roland (electronics), Nuemann (sports gloves manufacturer) and ddrum (acoustic drums). The latter developed a Vinnie Paul signature drum kit. The band signed to Eleven Seven Music and released the albums “Band of Brothers” (2012), “Blood for Blood” (2014) and “Undeniable” (2016). Vinnie recorded the drum tracks for the album “Welcome Home” (2019) just before his untimely death.

Vinnie Paul‘s last musical performance was with Viva La Muerte on June 18, 2018 at the Hard Rock Hotel and Resort in Las Vegas. The musician died on June 22, 2018 at his estate in Las Vegas, Nevada from dilated cardiomyopathy and coronary heart disease. He was buried next to his mother Carolyn and brother Dimebag in an unconventional KISS Casket provided by KISS members Gene Simmons and Paul Stanley. The ceremony took place at Moore Memorial Gardens Cemetery in Arlington on June 30, 2018.