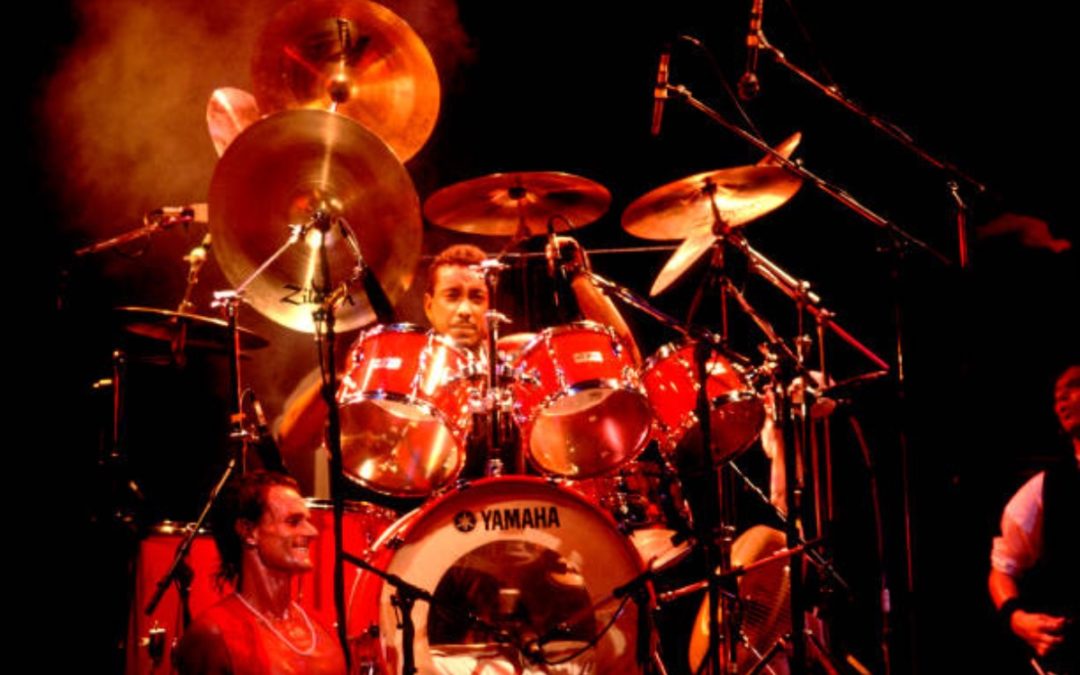 Yamaha is one of the most renowned brands in the musical instruments market (and not only that), but also in drums. As the company celebrated its 50th year in the drumming world not so long ago, we thought it would be a good idea to present the profiles of those of its endorsers who have left their mark on music history and have contributed to the enrichment of the drumming art. This particular text (after Al Foster, Andy Newmark and Mike Bordin) is about Tony Thompson – the late funk and disco master, but a rock drummer at heart. 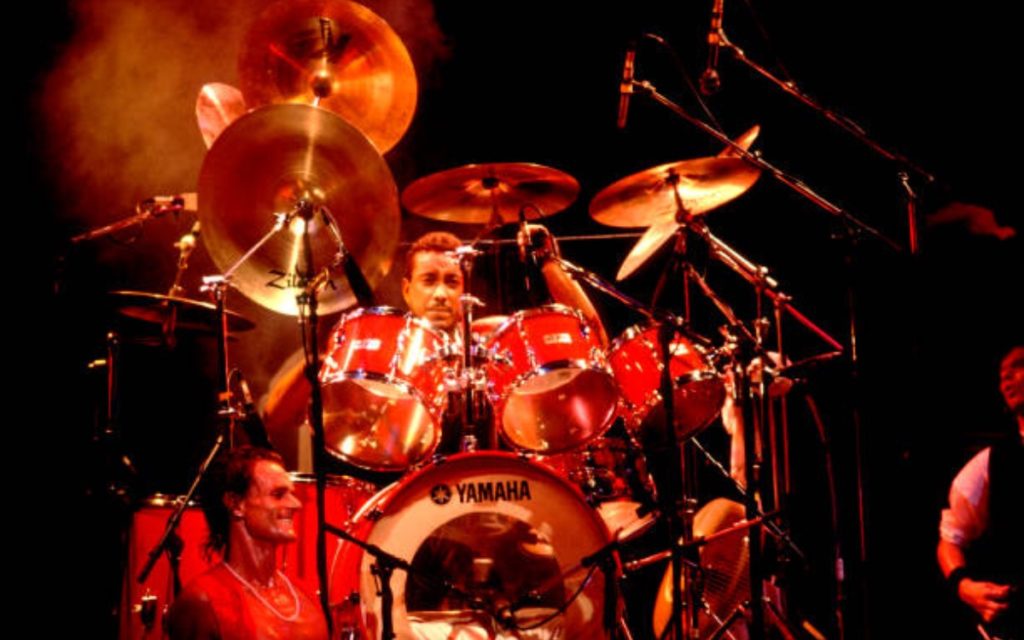 Anthony Terrence Thompson was born on November 15, 1954, in Queens, New York. His mother was Trinidadian and father was of Antiguan descent. He was growing up listening to rock:

“I love funk, but my major influences were rock. The reason I play drums is people like Ringo and The Beatles, Mitch Mitchell and Jimi Hendrix, Ginger Baker and Cream. John Bonham and Led Zeppelin blew me away. I played rock in neighborhood bands. I was also into fusion. I would go down to 7th Ave. South. That was a club in New York City that The Brecker Brothers used to own. I would see Chick Corea with Steve Gadd. I remember seeing Return To Forever. I saw Billy Cobham for the first time – and saw God. When they broke into “The Inner Mounting Flame,” it was the most awesome performance I’ve ever seen in my life. My God, it’s still embedded in my soul seeing him play like that. To have that command and power – plus his chops were just super-human. Before that, I’d never seen anyone like Billy Cobham.”

Thompson’s first professional experience in the music business was working with the all-female singing group Labelle, which found success with the smash “Lady Marmalade” in 1974. Next was the band Ecstasy Passion & Pain. In the mid 70s, he met guitarist Nile Rodgers and bassist Bernard Edwards, which resulted in forming Chic – one of the top-selling disco era acts with such chart toppers as “Dance, Dance, Dance“, “Everybody Dance“, “Le Freak” (Atlantic Records’ biggest-selling single of all time), “I Want Your Love” or “Good Times“. In the late 1970s, grooves served by Tony (along with those from Dennis Bryon featured on tracks by the Bee Gees) pushed people all over the US onto the dance floor.

“We actually started as a rock band. But at the time, no one would hear of it – “Yeah, right, three brothers playing rock ‘n’ roll. That’s not gonna happen.” [laughs] So Bernard and Nile came up with the whole disco thing. I didn’t even know what disco was. It was very new to the scene. We pressed “Dance, Dance, Dance” without a record deal. Back then you could go over to a hot club, ask the DJ to play it, and see the results – which is what we did. And people just freaked. From there we signed to Atlantic.”

“When I first joined Chic, Nile didn’t like what I was playing. He felt I played way too much. Remember, I was into fusion at the time, you know, Billy Cobham. [laughs] Nile was like, “Why you need all those cymbals and stuff?” Bernard would talk to me: “Get rid of all that shit. Just keep a bass drum, snare, and hi-hat. When you master that, then maybe I’ll add another cymbal or drum.” So I was spoon-fed my kit. [laughs] But It worked. It’s amazing how creative you get from boredom. Nile and Bernard saw a lot of things in me I didn’t see in myself. They helped me immensely in learning to groove. They were the groove kings.” 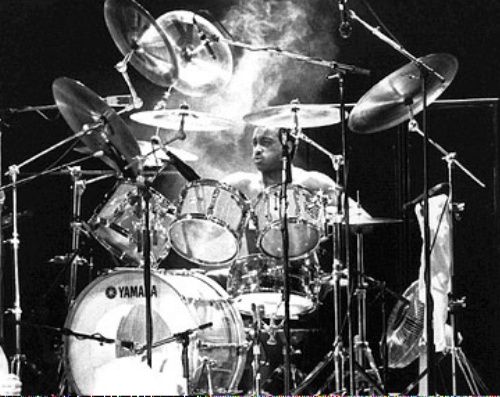 After Chic‘s success, the Edwards/Rodgers duo’s talents and services for other artists were in demand. Naturally, Tony Thompson was the drummer for most of those sessions, which allowed him to participate in the making of top-selling albums and hit singles by the likes of Diana Ross (“I’m Coming Out“, “Upside Down“), Sister Sledge (“We Are Family“, “He’s The Greatest Dancer“, “Lost In Music“) Debbie Harry (the album “Koo Koo“), Madonna (“Like A Virgin” album featuring the famous title track as well as the equally popular “Material Girl“), Robert Palmer (the album “Riptide” including the international smash “Addicted To Love“), Mick Jagger (solo album titled “She’s The Boss“), Rod Stewart, Jody Watley, or David Bowie (the commercially successful “Let’s Dance“). By the mid 80s, Thompson was one of the go-to US session drummers.

Mr. Thompson was also a member of The Power Station – a super group formed with bassist John Taylor, guitarist Andy Taylor (both of Duran Duran) and singer Robert Palmer. Two singles off the album reached the top 10 of Billboard 100 in 1985.

In that same year, saw Tony Thompson playing at the Live Aid charity benefit concert with two acts: The Power Station and Led Zeppelin (along with Phil Collins), who reformed exclusively for the event.

“I was on the road at the time with Power Station. I got a call from my road manager saying Jimmy Page and Robert Plant were on the phone. I was like, “Yeah, right.” [laughs] And I hung up the phone. About a half hour later, my road manager calls back again and says, “Tony, don’t hang up the phone. I have Robert and Jimmy on a three-way call from Chicago, and they want to talk to you.” I was like, “Are you serious?” So I talk to them, and it turned out they were fans of my work, so they asked me if I would consider doing Live Aid with them. So the day of Live Aid, I got to Philadelphia and Jimmy, Robert, and Jonsey rented out a rehearsal room and we rehearsed. I was glad we had that rehearsal. I grew up listening to Zeppelin. They were my bible when I was a kid.”

Led Zeppelin are rumoured to have planned a reunion in 1986 with Thompson behind the drum kit. Sadly, he was in a serious car accident that year and could not perform.

In the 1990s, Tony Thompson did not play as much, but he still would appear in high-profile projects, e. g. the 1993 Jimi Hendrix tribute “Stone Free“, the second Power Station album or “The Fragile” by Nine Inch Nails. Nile Rodgers believes it may have been caused by severe hearing loss. Thompson was known for very loud playing.

“All these years, people wanted to sample me. Everyone always assumed that there was some kind of special knobs turned when we did that first Power Station record. All it basically was, was a brand-new Yamaha kit (which I still play) in a very live, brick, recording studio in London called Mason Rouge. I hit the drums very hard. That’s it! [laughs] We did “Some Like It Hot,” and everyone had all these stories, saying all kinds of things, about tricks that were going on. Samples weren’t even around back then. So, bottom line, the sound came from a good kit, hit hard, in a nice live room.”

Tony Thompson died on November 12, 2003 due to kidney cancer.

On September 19, 2005, Tony Thompson (along with his Chic bandmates) was honoured posthumously when he was inducted into the Dance Music Hall of Fame.