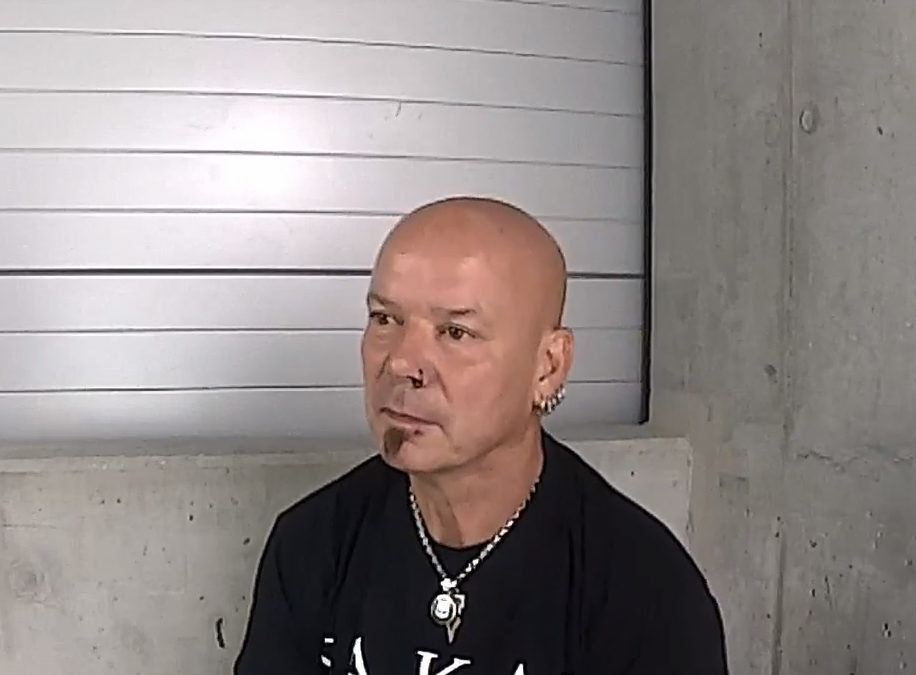 In the first part of the interview, our guest talks about his approach to drum clinics, as well as the drum gear he uses on a daily basis.

BeatIt: Russell Gilbrook! Welcome to beatit.tv – the Polish drummers’ website! We are catching up with you at Drum Fest Opole, Poland. You are here to do a clinic and to judge the contestants.

B: Let’s talk about your approach to clinics first. What do you think is the most important message you want to convey to the people who come to your clinics?

R. G.: It’s basically the understanding of information because if you don’t understand something, you can’t practice it properly. And if you don’t get given the correct information, you don’t know what it is you’re supposed to be practising. So I always think clinics should be about, you know, you’re there to try and inspire people but you’re also there to give the correct information in simple terms of the real drumming. Not pracitising 17/16 and twirling your sticks and doing all that because at the end of the day everyone wants to try and play grooves better and try and play for the music, for the band that you’re in. So any little tip you can give to help them do that so the next time they practise or do a gig is gonna be better. You should always try and get better.

B: That’s what I’ve noticed also watching your clips on YouTube – the instructional stuff you do. It’s not about god-knows-what, it’s about…

B: …Real, simple stuff – the practical elements of it.

R. G.: Yeah. When I started doing that stuff… I tour 27 countries a year. All this stuff that I’m doing, I’m doing it to earn a living and I’m doing it real. So that’s the stuff I want people to get better at because they’re not actually better at that. They say they’re practising 17/16, clave and doing all this stuff and forgetting the real stuff that makes them actually better musicians. It’s prioritizing their practise schedules better as well.

B: Do you talk about sound as well at your clinics? Tuning, things like that.

R. G.: I like the audience to tell me what sort of clinic to do beacause every audience is different. I have a little bit of a format that I do but if people ask me about tuning then I start to tell them about it. If they ask about recording, I go through the whole lot but I usually wait for the audience to tell me which direction my clinic should go in. Of course, sound is everything. I’m not really fanatical about how you hold the sticks. I think if you’re struggling with an element of speed, power or control, you have to look at the grip but at the end of the day the sound is the most important thing.

B: Sound is instruments as well. What do you use? What’s your gear?

R. G.: Sakae drums, Paiste cymbals, Aquarian drum heads and Pellwood drum sticks. For me, it’s about representing yourself. When you start getting good as a musician, you should have your own identity and your instrument is supposed to be representing your identity. It’s a very important thing that people choose the right skins, the right sticks to complement their personality and their individuality.

B: Cymbal choice is quite a complex thing. What models have you actually chosen?

R. G.: With Uriah Heep, I tend to use Paiste Alphas because of the durability and they just work well within the context of playing the classic rock stuff so I need cymbals for that. When I’m doing more funky, bluesy, quieter stuff, I use Dark Energies. I just love the dry sound of them. Obviously, they’re more musical but they’re not quite as durable. I don’t hit them as hard so they work nicely for that. If I’m doing recordings and stuff, I’ll always take in, say, three or four rides, three or four different sets of hi hats. The crashes tend to stay what they are but it’s the ride and the hi hats that make a big difference.

B: Skins. Clear ones? Coated ones?

R. G.: I tend to change every few months to give my ears a different head space. I don’t prefer one over the other but I’m a big fan of the Force Ten, Aquarian. I do feel that particular skin does in fact draw out the meat of the shell, which is rather good. And the Hi Energy IS the best snare drum head in the world, that’s a fact. I used to play other skins and stuff but I hit very, very hard and I can get 40 shows out of one snare drum head. With other heads, I probably get six songs, I don’t even get a gig. So that is the king of heads for me as far as the snare drum’s concerned. On the bass drum, I tend to use a Super-Kick I, sometimes Super-Kick II, depending how I feel, really. I don’t change that often. My drum tech will probably change the head if he can’t tune it or it’s literally battered. I don’t believe in new heads too often. If it sounds good, stay on!

Drummers and Drummerettes! Here is Russell Gilbrook in the first part of an exclusive interview for BeatIt!