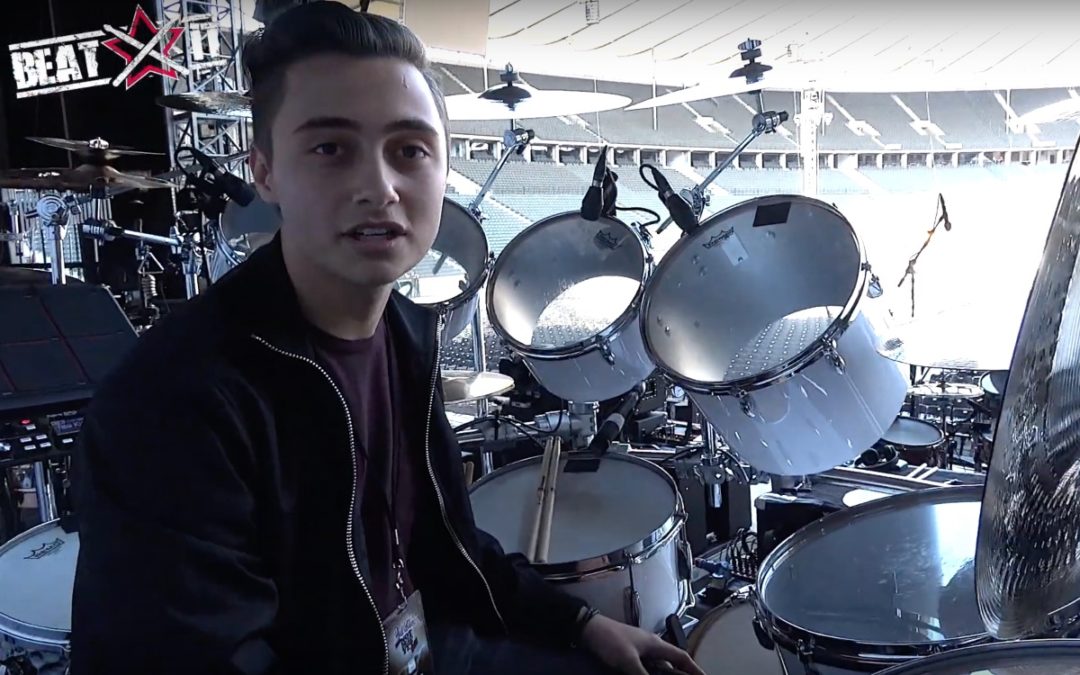 Although the aftermath of Phil Collins‘ concert in Warsaw yesterday is still running high, we took a three-hour drive from our HQ to the German capital already three weeks ago to have an encounter with Nic Collins – the son of the legendary drummer, singer and songwriter. Although 18 years of age, Nic very smoothly, eloquently and professionally talked and walked us through his Gretsch drum kit with Remo skins, Sabian cymbals and Roland electronics. If you haven’t seen or heard him perform with his Dad yet, we can tell you he is just as smooth and professional when playing these drums as he is talking about them. Also, there were just about 50,000 ecstatic people at the Olympiastadion in Berlin a few hours after this was filmed, who would surely confirm our statement if only asked. 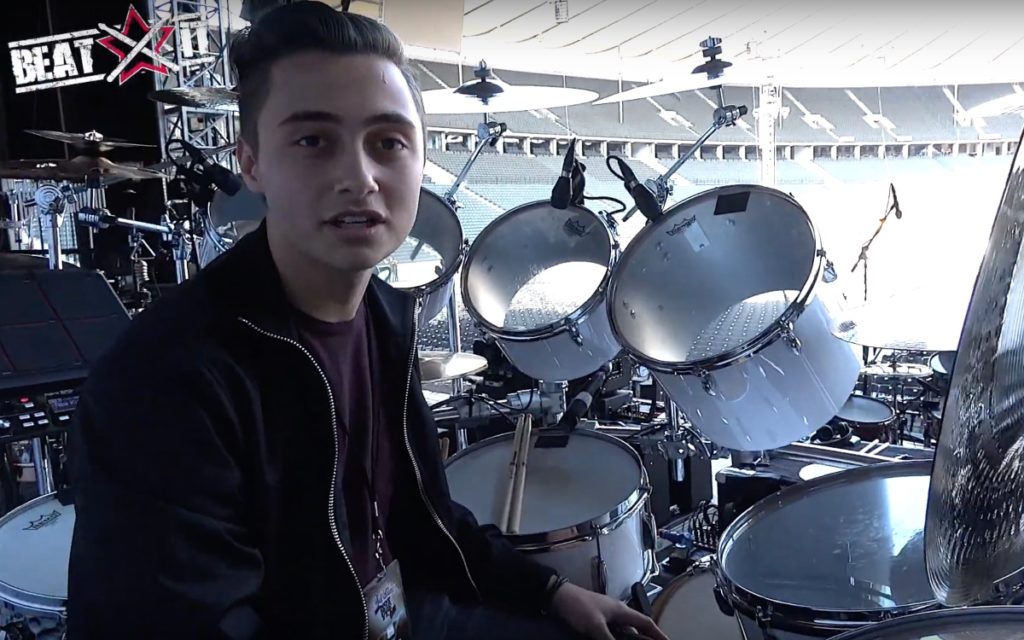 Nic Collins here on the Phil Collins tour in Berlin at the Olympiastadion. I’m doing a kit runthrough for the kit we’ve been using during this tour. We started in June 2017 and I’ve been using this kit for the whole time. It’s a Gretsch USA Custom with white finish. There’s only a certain amount of finishes you can do with this kit – it’s either the white or the classic black that Dad had. There’re a few others but you can’t get too crazy wth it. I really love this finish because whenever the lights go on it reflects it really well.

We’ll start with the drums themselves. These are all the sizes that my Dad used because I kinda have to do the sound. At home, I do use some of the concert toms but not all the time. With this, you kinda have to. This is the 8”, 10”, 12”, 15”, 16”, 18”, a 7”x14” snare drum, and a 13” snare. This is just a standard Gretsch snare – a hand hammered chrome shell, which is kinda side snare stuff. We’re not doing much of it on this leg of the tour, just for a selection of songs. We haven’t done that many for that one. This is a great-sounding snare. We were using Noble & Cooley but the Gretsch colour and everything is just really great. All of these are concert toms without the bottom head – kind of a classic Phil Collins sound. On certain songs, you don’t need the whole sound, but on songs like ’In the Air Tonight’ you need it. If you were playing it on any other kind of drum set, it would sound pretty terrible.

We use a Remo Diplomat head on the 8” tom just because it’s got a kind of crack to it. Remo Ambassadors are on all the other ones. They’re thin heads but if you put heavy heads on these drums they don’t sound the way they should. The bass drum is a 20” – really small. When there’s no subs, it sounds kind of weak, but as soon as this gets turned on – and I’ve got a Porter & Davis throne – it just gets really massive. It’s got the punch for the set we’re doing. There’s an Ambassador Smooth White head on it. The front head has barely got any of it on. There’s only a kind of an outline and the rest is gone. It’s got the pillows and everything. There’s an Ambassador X on the snare drum. It’s really thin but the best thing for the way it sounds. There’s an Ambassador on the other snare as well.

We’re using DW hardware with a DW rack because this kit is so complex the way it stands that using stands it’s not consistent – every time you set it up it’s set up differently. This rack is easy to put the drums on and then it’s all perfect.

Sabian cymbals.  Here, we’ve got this little stack, which we only added when we started doing Australia back in January of this year. It’s a 10” O-Zone and an AA splash. All the crashes and the ride are Artisan cymbals: 16”, two 19”, two 20” and another 16”. This is the Chad Smith 21” Holy China, which is my favourite part of the kit even though I don’t get to use it that much, but when I do it’s enjoyable. Then, there’re 14” AAX X-Celerator hats. The ride is a 21” Artisan. All the cymbals are brilliant finishes, which looks really good when all the lights come down. I love the ride because it’s got a nice bell. When you hit it as a crash – we’ve got this big drum duet during the set – it sounds really good when it’s mic’d up. 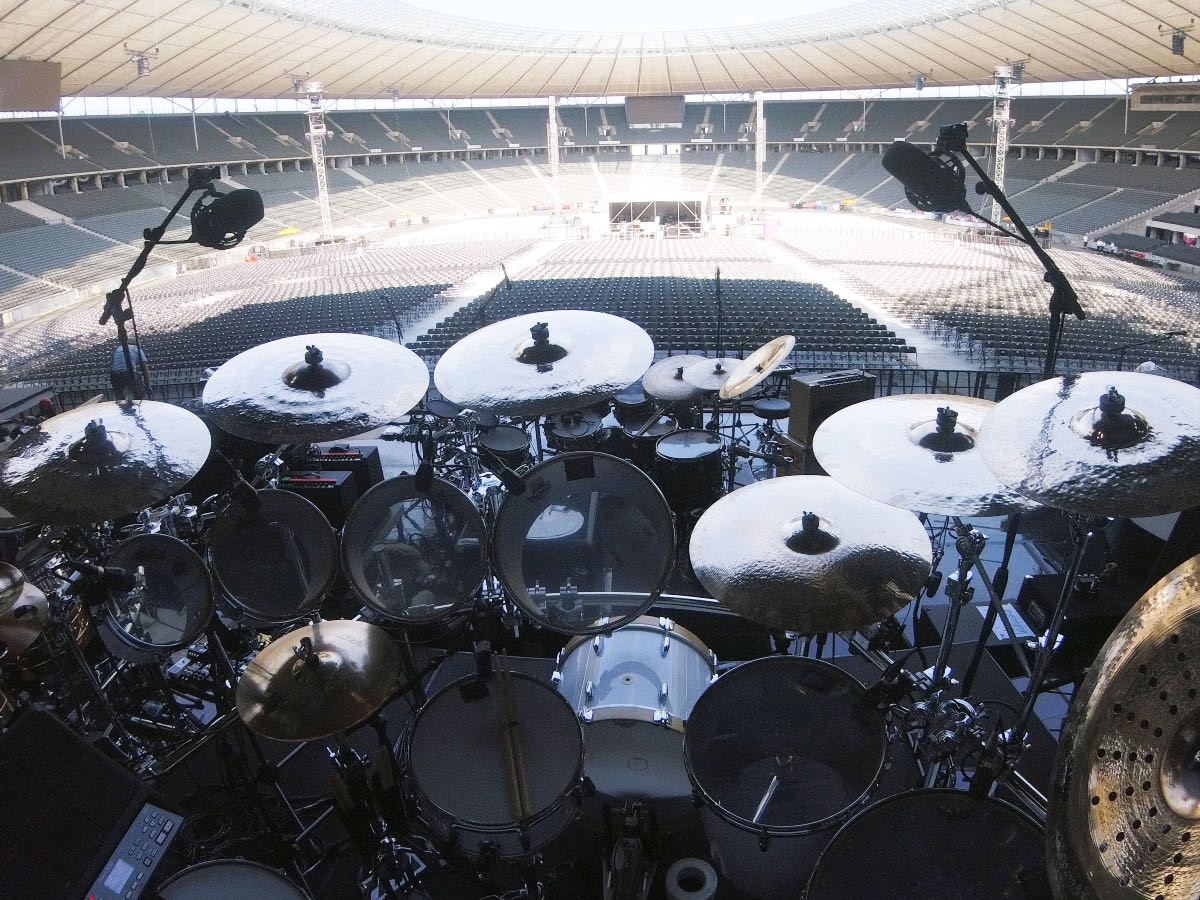 DW 9000 pedals – just reliable. Actually, the other day the bass drum beater snapped in the middle of a song but that’s alright. I love the pedals that are smooth and give grip and response. It’s one of those pedals where you can just set them up and they work straight away. You don’t need to adjust all the tensions and all that. Easy to work with.

Pro-Mark sticks I’m using have my name on. When I got the sticks, I wanted them to be based on the Steve Gadd Vic Firth stick just with a bit more weight and a bit more length to it. We kinda came up with this. When they first started doing it a few years ago, it had a tip that was going through the heads denting them all the time. With the changed tip, they’re good. Depending on the night, they last the whole show but sometimes they break. I was using the FireGrain ones but when you use them consistently it stains all the heads and the cymbals.

Back here, we’ve got the Roland SPD-SX pad. We haven’t really been using it on this European leg and all these stadiums ’ cause we’re using it on the song ’Can’t Turn Back the Years’, which we’re not doing on this leg but we were on every other one. We did use it on ’One More Night’ as well. It was tough at first to kinda get used to playing the drums and thinking as a drum machine not as a drummer – without doing any fills. It’s bass drum, hi hat, snare and then all the toms. It’s like a Roland 808 kinda sound. Really staying consistent with just your hands without using pedals is a challenge, but now it’s pretty good. It’s pretty reliable, always works. I don’t really get too crazy with this. I know drummers who have their whole show programmed on an SPD-SX. I don’t really know how to use it, I just kinda have this sound and it’s all I use.

We just have a random metronome that we use and that’s about it.

The cymbal holders are standard DW ones. I think they’re just reliable. Although they kinda spin off, once you get them at the right tension they give you no problems. To me, DW stands are the best to use. I’ve used plenty of stands and all of a sudden you have one lean in. Also, them being on a rack makes it much easier because of the angle that they’re at.

Back home, I use a kit with my band which is just a standard John Bonham kit. I don’t have a 26” kick, I have an 18”x24” and then 14”, 16”, 18”. All the stands are straight, not at an angle. This Gretsch has a complex set-up as far as the cymbals go just because trying to fit them in with all the toms is easier on a rack. We haven’t had any problems with it and it’s a great-sounding kit, especially when it’s mic’d up and we start playing the set. On some of the songs in particular, like ’Against All Odds’. Soon as that first fill hits, this drum set has THAT sound.

During the drum duet, when I go out front with Richie Garcia – the percussionist on the road with us – and we do a bit of a cajon thing with my Dad, that’s just a standard LP cajon. I’m not too fussy about that.

I think that’s about it. Thanks for watching!