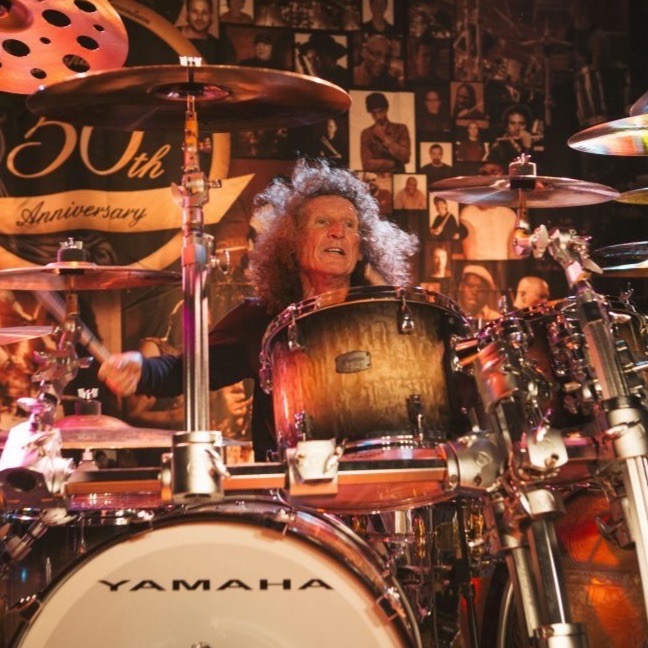 It is common knowledge that Yamaha is a company with an outstanding history in the world of musical instruments. Without fear of exaggeration, it can be said that their synthesizers and drums (the Recording Custom in particular) have helped define the sound of modern popular music. It is therefore interesting to take a closer look at some of iconic concerts and see which of them were played on Yamaha drums. Naturally, the selection was a subjective one. If you have some suggestions as to live performances not included here, feel free to let us know. Who knows? Perhaps there will be enough of them to write a second installment?

A classic performance from the early days of U2, which took place as part of the concert tour in support of their third album, “War“. It was originally released as a video cassette titled “U2 Live at Red Rocks: Under a Blood Red Sky“, and Rolling Stone described the performance of “Sunday Bloody Sunday” featured in the film as “one of the 50 Moments that Changed the History of Rock and Roll”. If so, it’s probably high time to forget Bono and Adam Clayton’s hairdos, and acknowledge the importance of Larry Mullen Jr‘s drumming style for U2’s global phenomenon. What drums have been his weapon of choice over the years? For years, it has invariably been Yamaha…

In this case, we could include the band’s 1992 performance from Prague, which already featured material from FNM‘s most critically and commercially acclaimed album, “Angel Dust“. The event was also transmitted live on MTV. However, they were playing in broad daylight, supporting Guns n’ Roses. For this reason, I’m going for a show they did two years earlier, which presents a youthful, slightly callow, but absolutely irrepressible incarnation of the band. Drummer Mike Bordin had already arrived at his classic kit configuration (Maple Custom a lot of the time). He has never been one to modify or drastically change it anyway…

There’s been a lot of bad blood in connection with that performance. Both Robert Plant and Jimmy Page would rather forget it, while Phil Collins had to take a lot of heat for having performed poorly. It would seem undeserved as one can clearly see Chic’s Tony Thompson attack his Yamaha (seems like a Recording Custom), paying no heed to his colleague (he knew how to bash on the drums), while Phil lets it go and leaves space for him. Despite a few lapses and a slightly chaotic performance, we are dealing with a historic moment, i. e. one of three Led Zeppelin reunions after John Bonham’s passing.

A concert played to a huge audience at the Monsters of Rock festival, which Whitesnake were headlining. It spelled the end for that most commercially successful incarnation in the group’s career, as it disbanded shortly after, but portrays Tommy Aldridge and all his band mates in excellent form. Eleven years later, Whitesnake’s fans organized a successful Internet campaign for the release of this material on CD, DVD and vinyl. The instrument Tommy used here was a custom made set with Recording Custom lugs and larger badges.

There’s never enough of Peter Erskine‘s drumming, especially on a drumming website. As the man did play Yamaha drums for a few years, his name simply has to be included on this list. Just listen to how beautiful they can sound when used by a master such as this. Vibraphonist, Mike Mainieri, adds his exquisite parts, all under the supervision of saxophone great Michael Brecker in Steps Ahead. Sit back, take a look, take a listen…

One could include a show GNR did a few weeks later in Paris, which was transmitted live to every corner of the world, and released as a feature film. It is, however, the Wembley appearance in memory of Queen’s mighty frontman that has left an indelible mark in Guns N’ Roses and rock fans’ memory. One of the reasons for that was the iconic rendition of Bob Dylan’s classic “Knocking On Heaven’s Door“, which basically became the reference version for the young generation of the early 90s. The band were at the height of their popularity, powered by drummer Matt Sorum‘s efficient playing behind his stadium-sized Yamaha, which seems to be a Rock Tour Custom. A genuine rock classic…

The great Billy Cobham and his old mate, George Duke, reunited to charm the audience the way they had done twenty two years earlier at the prestigious Montreux Jazz Festival. Their performance of “Stratus” unfailingly makes the listeners’ blood boil. The old magic recaptured right there with the help of what looks like a Maple Custom kit (Mr. Cobham prefers maple anyway).

Two similar shows from the summer of 1986, portraying Queen a year after their triumphant appearance at Live Aid (could also make this list), which secured them a return to the top in what was possibly their best live fig. The former was filmed on movie film and shown in movie theaters. All the classic live killers (!) from the group’s back catalogue plus the then new “A Kind of Magic“, “One Vision“, “Who Wants to Live Forever” and “Friends Will Be Friends” guarantee great fun as well as beautiful experiences for every stadium rock fan in the world. The fact that both videos document the final tour of the classic Queen line-up only adds to the historic value of these magnificent performances from the band (including drummer Roger Taylor). Also, let’s not forget the failproof Yamaha Recording Custom…

A performance by Paul Simon and band during the concert tour promoting the album “One-Trick Pony“. It very quickly became one of Simon’s most frequently bootlegged live recordings, which can be attributed to both good sound quality and an excellent performance by all the instrumentalists. In the Internet and YouTube age, this recording has been given a new life due to the fact that the version of “50 Ways To Leave Your Lover” included there is one of the most frequently watched instances of Steve Gadd‘s drumming genius. And the name Steve Gadd is synonymous with Yamaha…

Vinnie Colaiuta, Steve Gadd and Dave Weckl performed on stage in the second part of the concert (the first act featured Louie Bellson, Gregg Bissonette and Dennis Chambers). Each of the three gentlemen appeared accompanied by the Buddy Rich Big Band, embellishing their individual performances with a drum solo, to finally play together, exchanging solos and fills. Pure magic created with the help of Yamaha Recording Custom kits in three classic colours.