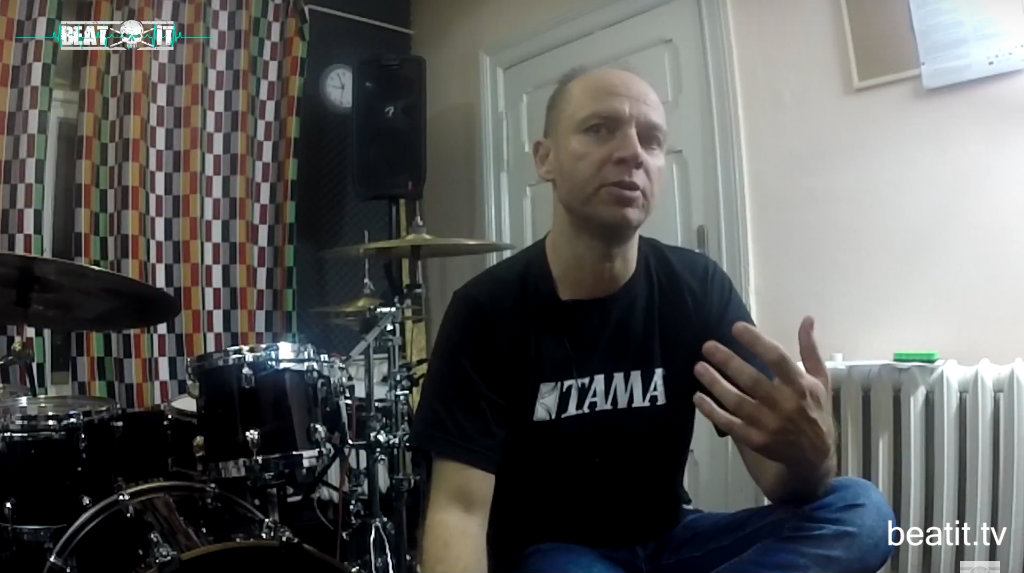 Peter Szendofi is one of the most talented professional drummers, composers and most frequently employed musicians in Hungary, whose reputation as an educator crossed the Hungarian borders long ago. He teaches at Galileo University Guatemala, North Karelia University in Finland and Drummers Collective, New York. He is also a member of the Drum Set Committee of Percussive Arts Society. As a musician, Peter has played on about 130 albums, and has performed with Loop Doctors (with Gary Willis and Brandon Fields), Fusio Group, Trio Ricardo, Subjective Symptom, and Eastwing Group, among others. He has also done a video for the widely popular Drumeo channel.

We took the opportunity to interview the man in-depth so that our viewers can also get at least a tiny bit of this great drummer’s knowledge and experience. In the sixth part, we talk about his warm-up routine, as well as the best and most memorable moments in his career so far.

I use quite the same type of a warm-up routine, no matter if it’s a live gig, a drum clinic or a studio session. I’m a believer in really simple things, e. g. single stroke rolls in a slow tempo. I try to warm up having the perfect stick control. In order to get that, it’s not necessary to play fast. To loosen up my wrists for 20 minutes on a practice pad, a pillow or even on my thigh is enough. I don’t apply any complicated routine for warming up. It’s simple things in a slow tempo. I also concentrate on slowing down my motions, which gives me a kind of more relaxed mindset before I go on. When starting a gig or a clinic, you are full of energy, you want to communicate something. That could affect your performance in the first 20-30 minutes. That’s why I try to relax, take a deep breath and just play slow things. If I have a chance to practice for an hour before I go on, that’s good, but I think it’s not necessary.

When on tour, that’s a time for playing, not practicing. Of course, I try to warm up every day, but it’s almost impossible to set up the drum kit somewhere else before the gig and then take it on stage and set it up again. It would take a lot of energy. Besides, if I needed to sit behind the drum set before each gig, that would mean I have a problem because it would suggest I’m not prepared. A drummer has to be well-prepared before the tour, and on tour you just have to warm up and be able to play. When I’m not touring, I have much more time to practice. Then, I go to my practice room, switch off the phone and really focus on the one thing I want to do.

I’ve had several beautiful moments in my career. As I get older, I see more and more of them. They didn’t seem that big 15 years before because I was just a kid and didn’t think much of them later. Looking back now, I see I felt something back then I haven’t felt since then. Recently, I had a chance to play with a great saxophone player named Chris Hunter. He has won a Grammy and plays with Michel Camilo, who is a fantastic Latin piano player. Chris was a top soloist for the Manhattan Jazz Orchestra and used to play with Michael Franks. He’s a really big cat. We did a recording together in Brooklyn in 2014 and, since then, we’ve done numerous tours and recording sessions. It’s always a great pleasure to play with him. When he starts playing, I’m totally happy and smiling. He’s a nice human being and a fantastic sax player. I’ve also had the chance to play with several big players. For example Gary Willis, who is a monster bass player, one of the best in the last 50 years. We also did a couple of recordings together and some tours. He has a great sense of humour and I could tell you a lot of stories. I’ve also worked with Brandon Fields, who is a saxophone giant. He used to play with Michael Jackson, Babyface, Tower of Power, Dave Weckl Band, Barbara Streisand. Over the years, I have learned it doesn’t matter where you are geographically. You can find fantastic musicians anywhere in the world. Be it Poland, Hungary, the US, Japan or India. So I’ve had several great moments. I’m so thankful and so happy with the music because I’ve been blessed with a profession which is my passion at the same time.

Drummers and Drummerettes! Here is Peter Szendofi in the sixth and final part of an exclusive interview for www.beatit.tv!