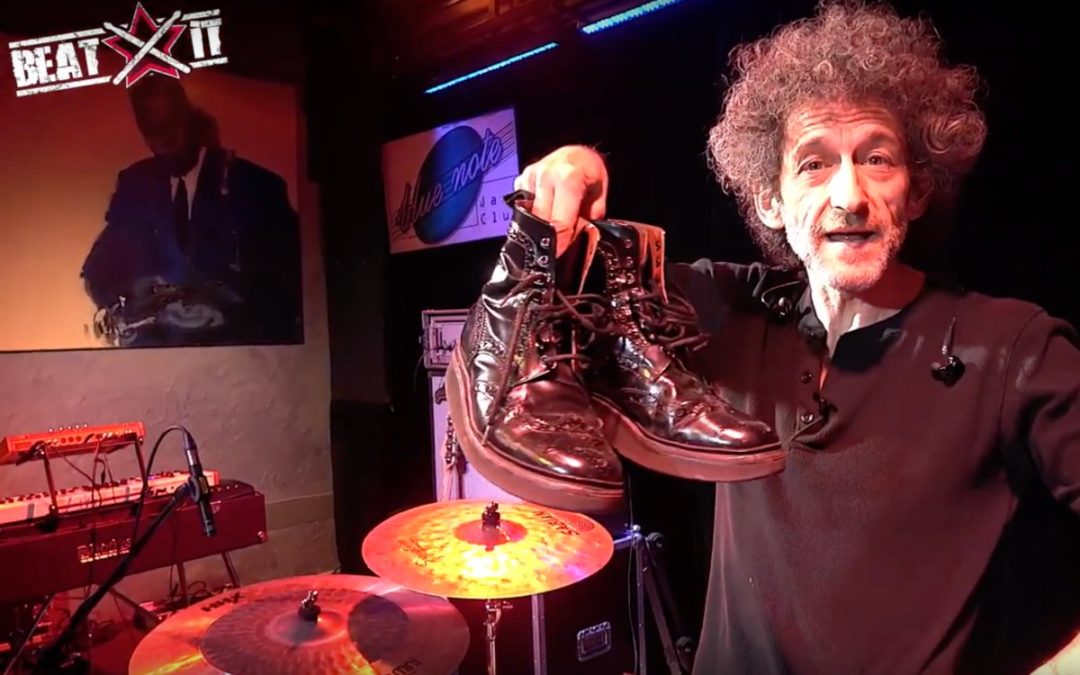 At the end of October this year, the Swiss virtuoso drummer Jojo Mayer stopped by in Poland on a European tour with his band Nerve. We just could not miss out on an opportunity to meet up with the man again and talk about the most important things, i. e. his drums. Even when presenting his kit, Jojo didn’t resist playing a few hefty grooves and fills. Music to the ear… 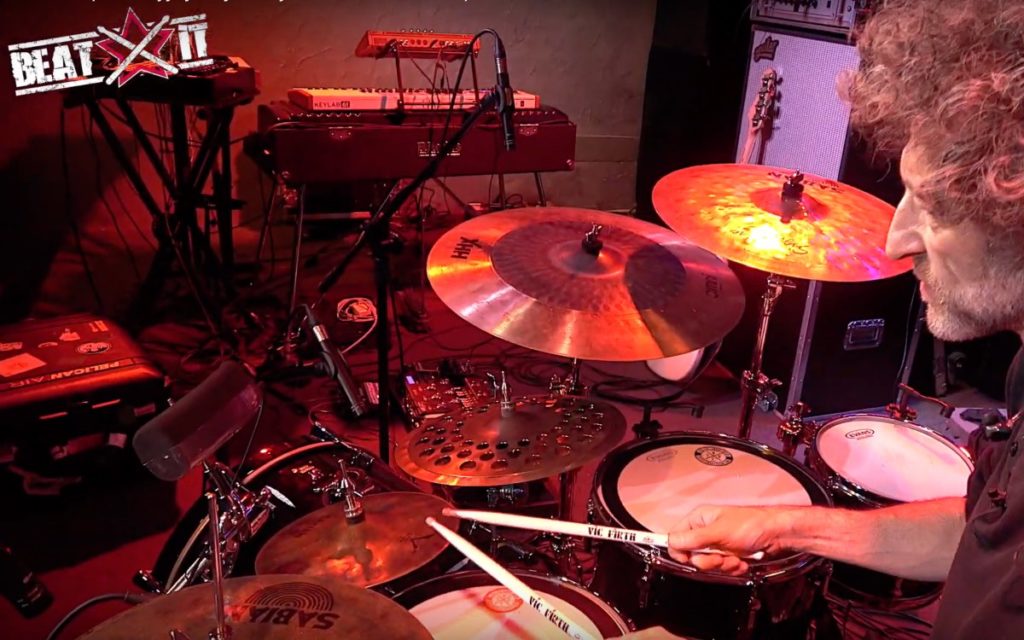 “Hi there! Jojo Mayer here. We’re here in Poland with my band Nerve on a European tour and I’m here to give you a quick rundown of the equipment that I use on this tour. Maybe we’ll start with the far left and go to the right.

Over here, I have my electronic rig. It is really basic. This is the Allen & Heath mixer, with which we communicate with the house. We don’t use any wedge monitors on stage, everything comes through this box into my in-ears. This is an Allen & Heath ME-1. We also travel with our own desk, which makes soundcheck simpler. I use these in-ear stage drivers from a German company. I just got them new and I’m really excited about them because they’re actually not custom mold but they feel like it. It’s a new proprietary system and they sound awesome. They make all the way from two to eight drivers and everybody in the band is using those. It’s great because you can replace them if something breaks and they really feel like molded earpieces. They’re called InEar.

I use a Roland TM-2, from where I trigger some of my electronic sounds. I also trigger the bass drum. They’re really simple sounds – not too crazy, kinda generic. I effect a return from the house with an Eventide H9. It’s an effect processor. I drive the program by Bluetooth. I use it a lot. I use a lot of effects: delays, distortion, compression, and they come from here. Down here is a clone – a DIY Swedish copy of a machine made by Pearl in the 1980s called Syncussion. It’s basically an electronic drum set. I launch sampled sounds with it. It’s a Pretty cool machine, I love it. I’ve been looking for those. The originals are very hard to get and costs thousands of dollars.

To the drums. Here, I have a 14” x 5.5” snare. The kit is a Sonor ProLite with maple shells. This snare is 14” x 5.5” and I use it with a Hoop Crasher that Sabian makes, which goes on top of a snare. I can also play the snare without it, I can get a lot of different sounds out of this drum. I use one of these snare sheets that really change the sound completely.

The heads on this tour are regular Evans G1 360°. They’re pretty versatile and work with pretty much everything.

This snare is a 14” x 5”. I tune it really high. Here, a 14” x 14” floor tom. The same thing. It’s a little unconventional, but I use one of these snare sheets on it too. Regular sound here… With this sheet on, I have a more electronic sound. This is a 10” x 8” tom, which I tune really high to get more contrast. It’s a kinda like an interesting thing. Sometimes, I turn this snare off to get some more melodic, soft…

The cymbals. I use a 14” Sabian Fierce hat. It’s something I designed, a prototype with a pronounced bell. This is a really dry hi hat, which allows me to get a lot of different sounds, from machine-like to a more open one. This is very dry and doesn’t go out of control, even if I open it wide. With normal hi hats you will get too much. It’s a nice thing and sounds good for drum-machine-like stuff. This is it’s little brother or sister – a 10” Sabian Fierce hat. What’s cool about it is it’s very loud. Usually, small hi hats don’t have much of an amplitude. I don’t have to hit this one hard. It always speaks out. This a thing I’ve been using for years. It’s a 14” Hand Hammered China with a perforated 13” Fierce hi-hat top. This is a Sabian HHX Omni cymbal, which is something that I designed. It’s a crash/ride in a way. You can get a lot of different sounds. Because I only have two cymbals now, I need more voices from one cymbal. This is a Sabian Fierce Crash, also with my signature. It’s a 19-inch, so it’s in contrast to the Omni. It’s got a deep, oriental sound. That’s that. The cymbals are all Sabians, obviously.

My bass drum pedal, which is made by Sonor. It’s called Perfect Balance and there’s two versions. This is the old version, a signature version. You can push this button here and the mechanism will collapse for transportation, which I like. There’s also the standard version, which is a little bit cheaper but is not collapsable. Actually, it’s hitting the market this week, I think. This is new. What’s nice about this is mounting it takes you three seconds and I can play. 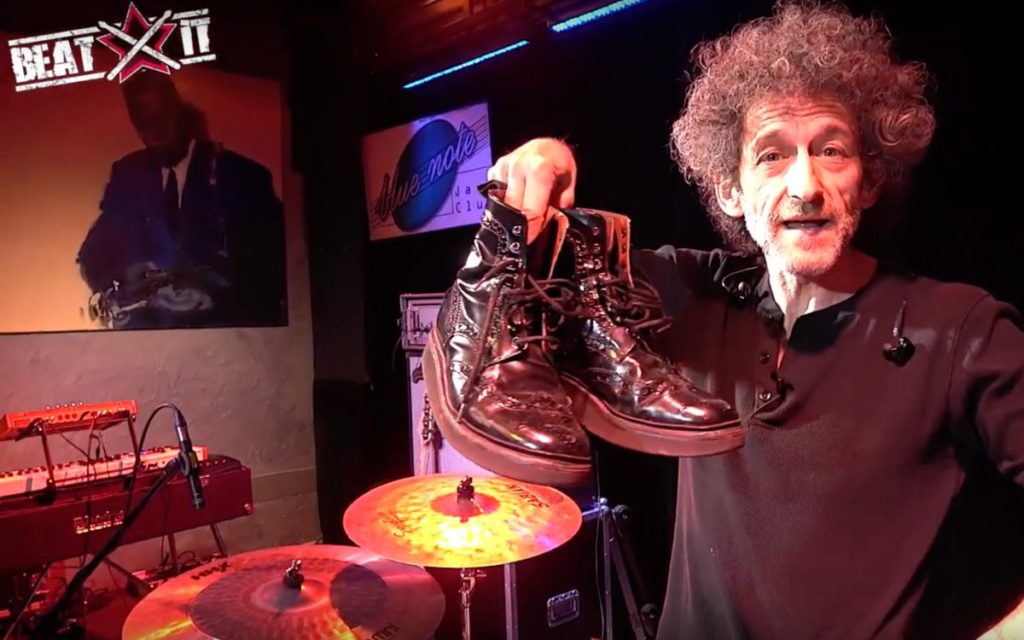 The bass drum is 20” by 16”. This is a kit that Sonor gave me for this European tour. I prefer 14” bass drums and that’s what I play at home in New York. They’re easier to play and easier to manage with mics. But this one is a great sounding bass drum. I really like it. Big sound.”