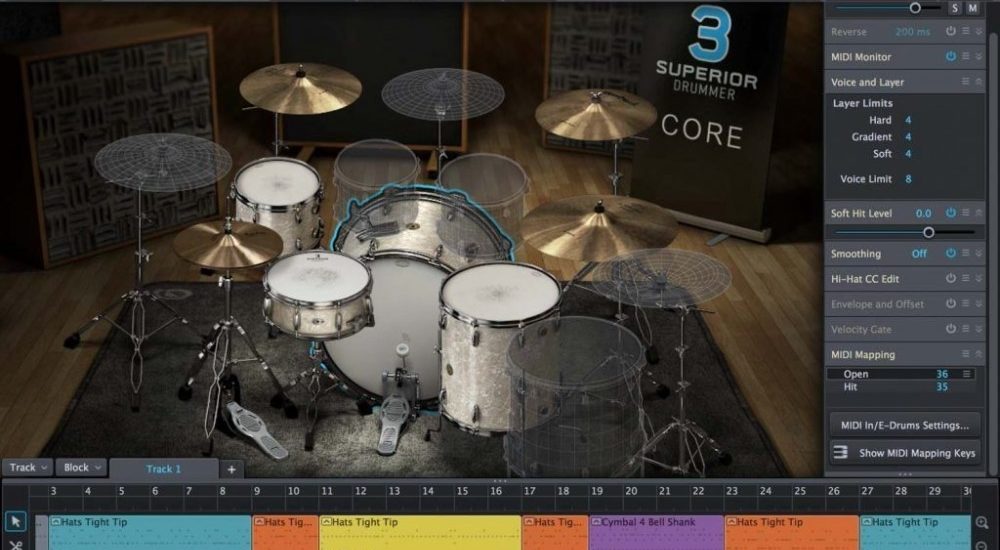 As all drummers know, the Toontrack company is one of the most important manufacturers of software for drummers. Their software synthesizers, such as Drumkit from Hell, EZDrummer and the previous two versions of Superior Drummer are classics today. Some of the most renowned drummers, including the likes of Tomas Haake (Meshuggah), Harry Stinson (Nashville), John “Jabo” Starks (James Brown), Clyde Stubblefield (James Brown), Roy Wooten (Bela Fleck), John Tempesta (White Zombie, Rob Zombie, The Cult) or Nir Z (Genesis, Jason Mraz, Joss Stone), have had their share in creating those products.

Very recently, the Polish distributor – the Audiostacja company – have sent us the latest version of the popular Superior Drummer software. The company’s statement is ‘Welcome To The Future Of Drum Production’. Let us see what it is really like…

The sound library was reccorded by George Massenburg, who is a renowned and an award-winning producer. His credits (as producer, sound engineer or mixing engineer) include over 400 (four hundred) albums, including those by Earth, Wind & Fire, Herbie Hancock, or Billy Joel. He has been inducted into the Technology Hall of Fame, received an honorary Doctorate of Music at the esteemed Berklee College, as well as four Grammy awards. The recordings took place at Galaxy Studios in Belgium, in a 330 square meter room with eight meter ceiling height and only 14 dBA of environmental noise.

We carried out the test at our own recording facility. We utilized a Roland TD-1KV electronic drum kit. In the course of the test, we re going to present the four basic interfaces, drum kit configuration, playing an electronic kit, articulation and dynamics adjustment, selecting drum kits as well as individual instruments, editing individual sounds, rhythm selection, rhythm arrangement, the TAP2Find function, the ways to control sound takes, the mixer, and editing a drum track.

Superior Drummer 3 interface has four basic functionalities: drums tab, grooves tab, mixer tab oraz tracker tab. Working on each of them is easy and intuitive as everything is designed flawlessly from the point of view of graphics.

Let’s start with drum kit configuration. On board, you will find most of the electronic drum kits available on the market today. All you need to do to start playing such a kit is connect it via MIDI. Then, you can play your drums, record your performances and play them back. Obviously, you can adjust dynamics and articulation (9 layers for crashes, rides and splash cymbals, 27 for hi hats, 8 for snare drums). A user gets 7 drum kits to choose from (Ayotte, Gretsch, Pearl, Premier, Yamaha, two Ludwig configurations, i. e. standard and concert toms), and can change any given instrument in a kit, as well as add instruments to it. Editing instrument sounds, i. e. volume, solo, pitch, reverse, articulation, envelope, attack, velocity curve, gating, hit level, layers for stroke types (alternate hits, randomize etc.) creates absolutely no problems.

In the grooves tab, the user gets a huge library of rhythms, verses, choruses, bridges and drum fills in all kinds of music styles (funk, rock, metal, jazz, blues, pop, etc.). A text search function facilitates the selection, which can be made using such criteria as style, tempo, time signature, etc. For rhythms, fills, etc., one can select individual kit elements (snare, kick, toms, cymbals), which can obviously be played in different ways, e. g. open/closed hi hat, alternately hit tom toms and snare drum, etc. Rhythms can be arranged, e. g. using a ride body sound for a number of bars to switch to a bell sound later. All the rhythms can also be adjusted on one tempo. The TAP2FIND functionality allows the user to record his or her own rhythm, and then use it as a basis to find similar figures in the library. All the rhythms can be quantized.

The number of audio OUTs in the mixer depends on the sound card. A user practically gets full control over sounds, i. e. the possibility to add and take away instruments (loud/silent, close/distant), make phasing and envelope changes, functionalities such as TIME OFFSET, MUTE, SOLO, etc. The mixer tab also offers the obvious editing options, such as more/less instrument, adding effects, bus, pan, level adjustment in dB, etc. In order to replace a sound, select the AMOUNT and BLEED functions to adjust the way a sound is recognized, copy the track, and select the next instrument. You can also export MIDI tracks changing their tempos and replacing instruments, both individual ones and entire kits.

When working on Superior Drummer 3, we naturally get such functionalities as grid editor, time and tempo editor, quantize, velocity (soft/hard hit, alternate strokes), bus, route, send, bounce, but also a wide range of mics and their settings. This refers to their types (condenser, dynamic, ribbon, etc.), placement (inside/outside a drum), snare (top/bottom), ambience (close/distant), overheads, bleed control and many more.

Depending on whether the buyer owns the previous Superior version or not, three configurations are available: 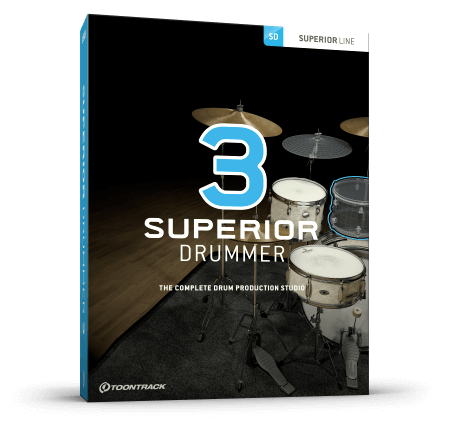 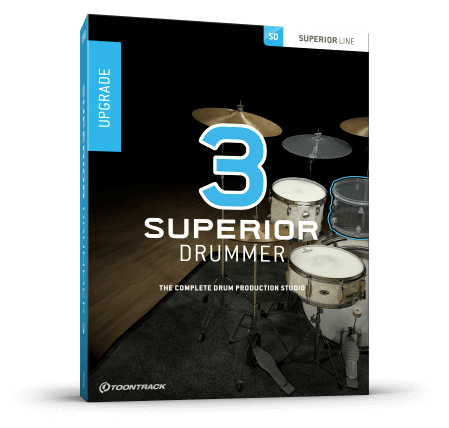 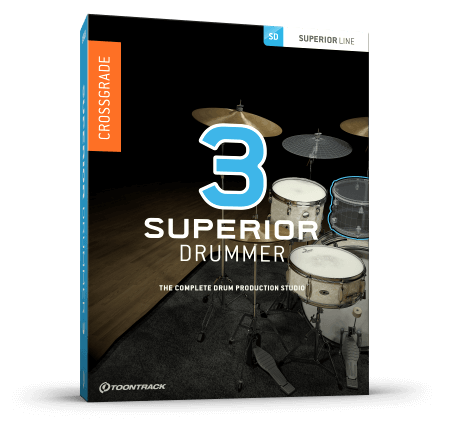 Superior Drummer 3 is delivered as downloads, available directly from the Toontrack Product Manager upon registration. The sound library is configured in six download packages:

Owners of the previous Superior Drummer version will have no considerable trouble operating version 3.0. For those unfamiliar with the software, it shouldn’t cause too many problems either as everything is designed flawlessly, both as far as the graphics and logic are concerned. Is the future of drum production really available to us here and now? Actually, yes. The quality of sampling, effects and, consequently, finished drum parts prepared using this piece of software is astonishing. One may want to have a few more drum kits in the library (e. g. Slingerland, DW), but on the other hand users can add their own sounds to it, so nothing is lost. The Superior Drummer 3 is a piece of software which is virtually complete. Does it eliminate the need to have a real drummer in your studio? We hope not…

Here is an example drum track recorded on a Roland TD1-KV electronic kit:

Drummers and Drummerettes! It’s time to put the Superior Drummer version 3.0 to the most important test of all, i. e. the en.beatit.tv viewers’ test! Straight from the BeatIt studio!