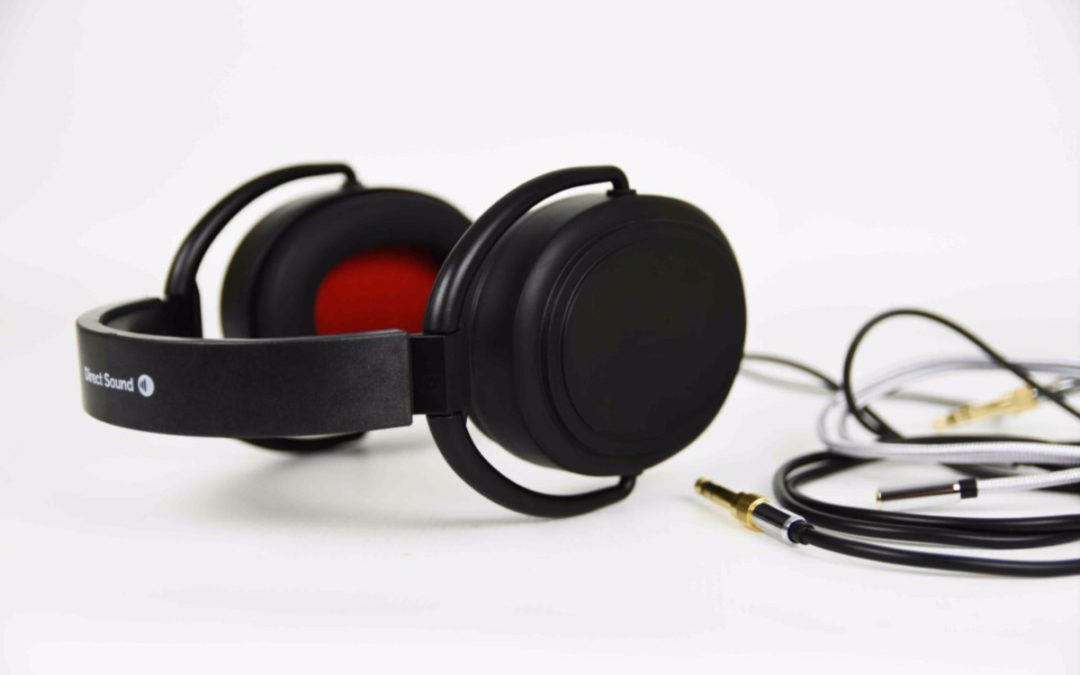 In the recent weeks, we have received yet another parcel from DrumStore – an excellent outlet based in Gdynia, Poland. Inside, there was a number of interesting objects, which we are going to thoroughly test for you. We will share the results of our tests with you as we go along. Today we would like to share the experience of testing the Direct Sound SP-34 Extreme Isolation headphones with you.

Similarly to the EX-25 model, our impressions as far as the quality and performance of the headphones themselves are very positive. All the strain relief spots (also known as ‘flex’) next to the jacks, the jack socket the and ear cups (that’s where cables usually wear if the cable bending radius is too small) look very solid and are made of aluminium, not plastic, which gives the product a completely different appearance altogether. The headband is strong and fully adjustable, so that it will fit on every head. The speakers are covered with pieces of fabric in two different colors (black on the left, red on the right) – a very practical solution as you do not have to look for tiny letters L and R on the cups.

New High Precision Audio Drivers (HPA) are designed to improve audio fidelity and sound quality. It is worth noting that the cable running from the headphone chambers has a socket for a small stereo jack, so that in the event of any sudden jerking, there is no fear of tearing or ripping it around the strain relief areas. In addition, on the other end of the 36-inch extension cable we have a gold-plated, screw-on small jack-big jack adapter.

We certainly liked the isolation capacity. Due to the fact that the ear cups eliminate high frequences present in the vocals and distorted guitars while reducing the volume of the instrument mix as a whole. This allows a drummer to keep click volume down while it is still fully audible. When playing the drums, all the drum kit elements will be heard without any problems. This is good news to all the drummers and drummerettes out there who worry about hearing protection (for those who don’t, too). Our bandmates heard no click bleed. In studio conditions, bleed from the headphones presented no problem either.

When it comes to sound characteristics of Direct Sound SP-34 Extreme Isolation headphones, we asked electronic engineer, electrician, sound engineer, pianist and bass player, as well as a good friend of beatit.tv, Artur Nowak, to share his impressions:

“I checked the headphones in comparison to three Sennheiser pairs: the budget level HD201 and HD202 as well as the slightly more high-end model, which is the HD490. I used a Yamaha CD-N500 player and an Onkyo 9070 amplifier (with built-in Wolfson DAC WM8742 chips – 192 kHz / 24-Bit.) All the devices were connected via an electric Monster digital interconnect, so the weakest link (the analogue circuit in the Yamaha player) was bypassed. Certainly, this is not the best set in the world, but rather worthy of all the headphones. Every pair has been plugged into a dedicated headphone socket in the amplifier. For comparison purposes, I also used the Honor 8 smartphone.

For the purposes of listening, I used some of the recordings that I know very well, both in the Audio CD and mp3 formats (easily distinguishable, by the way). I started with a few Rammstein tracks from the “Reise Reise” album, followed by Skunk Anansie’s “Wonderlustre”, Foo Fighters’ “Wasting Light”, the “black“ Metallica, Hope “Da Best Of”, Alter Bridge, and some lighter stuff to finish it off: a few random numbers from Basia, Kayah, Anastacia, Stevie Wonder, Rod Stewart…

In fact, there is nothing to pick on in an evident way. The aesthetics of the headphones tested make a very nice impression. Comfortable weight and pressure on the ears, also after about two hours of listening. An attempt to lightly bend the headband resulted in a visible delamination of its elements, but fortunately after the bending force had receded, the whole shape returned to normal. Maybe it’s a matter of this particular set?

The way the headphones are equipped is very interesting. There are three different connection cables, including one with a wire mesh reinforcement, both standard jack plugs (3.5 and 6.35 mm) included are made of metal and look rather solid. The inside of the ear cups is red and black (right and left channel respectively), so the lack of letters indicating the left or right headphone is not a problem.

The isolation capacity is really good (the name Extreme Isolation does suggest something after all). There were some minor limitations to the sound quality when listening from the smartphone, although the volume levels were absolutely satisfactory. It would be a good idea to practice on the drum set using these headphones. There is a good chance they will stand that test [We did exactly as Artur recommended. We certainly liked the isolation capacity. Due to the fact that the ear cups eliminate high frequencies present in the vocals and distorted guitars while reducing the volume of the instrument mix as a whole. This allows a drummer to keep click volume down while it is still fully audible. When playing the drums, all the drum kit elements will be heard without any problems. This is good news to all the drummers and drummerettes out there who worry about hearing protection (for those who don’t, too). Our bandmates heard no click bleed. In studio conditions, bleed from the headphones presented no problem either].

The greatest emphasis is put on the mid range and the border between the middle and the high-end frequencies. Because of this, the clarity of vocals, drums, brass and guitars is very good. Their tone seems neutral, maybe slightly brightened. Sometimes, I even had the impression that the guitars and vocals are competing for the band with one another, although it may be the effect of the intended movement in the mix of a given song. The highest subrange is musical and quite mild and dynamic enough, without the sharp, abrasive characteristics of cheaper products. The combination of mid and high range favors capturing the production details of the recordings – reverb, ambience, breaths, ghost notes and other additional flavours that are served right on the plate.

The bass is fast, bouncy and dynamic. Luckily, it is not extremely hard-sounding, which makes it nice to the ear. The only thing I miss in a pair of headphones of this class is a steeper descension from about 80 Hz down, which would also slightly soften this sub-range and give the proper weight to the low tuned instruments. Genres like hiphop, dubstep, or even broadly understood film scores sound less powerful than one could expect. A similar situation is to be expected in computer games – the weight of explosions and other artificially generated sub-bass effects may be insufficient for some recipients.

Generally, it’s a good product. It would be tempting to compare it with a few other headphone sets from the same price bracket (also from the same manufacturer) with the help of a reference set (high-end headphones, source and headphone amplifier). Unfortunately, I do not have such tools. 😉 “