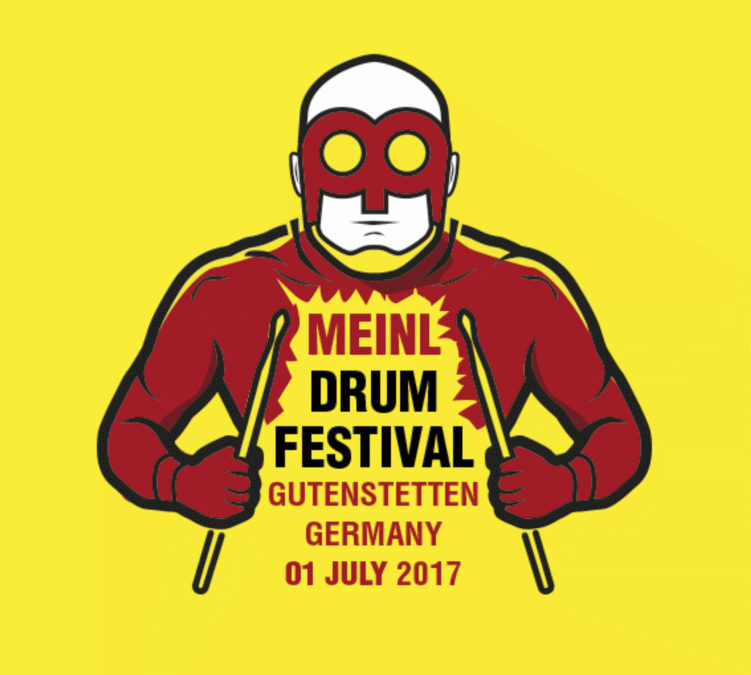 The 12th edition of Meinl Drum Festival, which was held on July 1 at the company’s HQ in Gutenstetten, Germany, is already behind us. It must be stressed that it was yet another successful Meinl event, which was organized very well (if not perfectly). From drummers’ performances and signing sessions through to an exhibition of the drum kits used by the artists at the festival, exhibitions of Meinl cymbals and percussion instruments as well as Tama drum kits (Starclassic and Star series), the drum-playing soundproof booth, the transportation, food and sanitary facilities – everything was organized with true German precision. The BeatIt team had a nice private chat with Craig Reynolds from Stray From The Path and interviewed Aric Improta, who turned out to be the sensation of the festival. 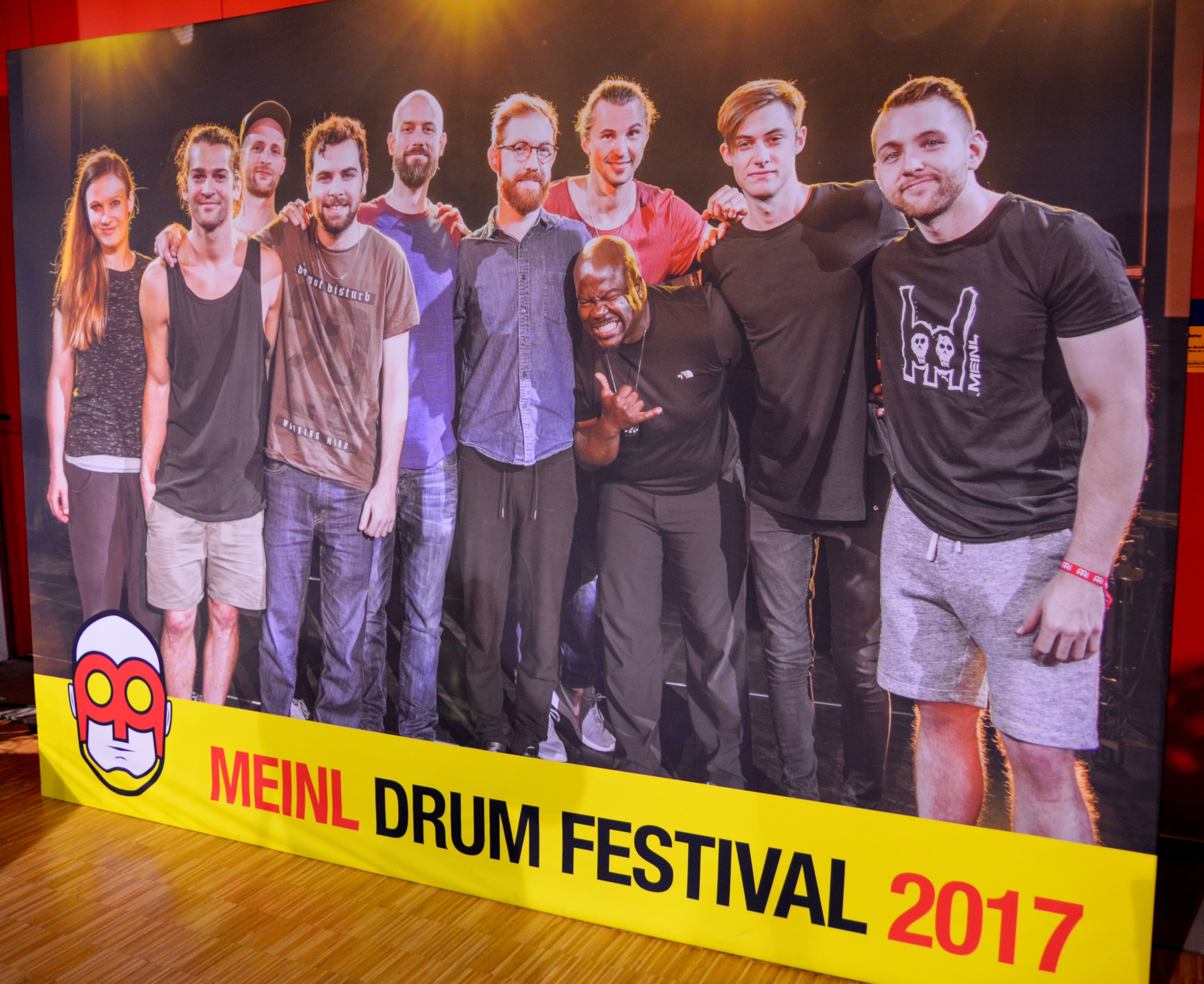 Let us get to the point, which obviously is the live performances by the stars of this year’s Meinl Drum Festival.

The event was opened by Benny Greb and we can safely say he (together with Chris Coleman) was the biggest star and attraction of the festival, judging by the amount of people gathered inside the concert hall. The audience’s trust was in no way disappointed. Benny made excellent contact with the crowd, his spoken interludes were humorous, and his playing was full of the characteristic groove. Benny’s marvelous solo was testimony to his skills and class, not only due to his playing (also with hands), but also because the man found the time and physical possibility to eliminate th source of sound distortion in the process. To put it in simpler terms: Benny sorted out a farting mic cable without interrupting his solo!  The crowd was also effectively drawn into clapping together in 4 while the artist was playing a groove shorter by a 16th note, which resulted in interesting shifts. This idea is based on Vinnie Colaiuta’s “I’m Tweaked“, which the German virtuoso performed in his own, highly interesting, version as the final segment of his show. Also, a big band/swing track is worth mentioning. It was performed by Benny partially in a traditional way (meaning: the way drummers from the classic swing era would have done it), and partially in his own style using effect and stack cymbals. The result was a compelling mix of the swing tradition and contemporary drumming. The cymbals Benny used during his performance were as follows: 14″ Byzance Vintage Sand Hat, 18″ Byzance Vintage Sand Thin Crash, 22″ Byzance Vintage Sand Crash Ride, 20″ Byzance Vintage Sand Ride, 18″ Byzance Vintage Trash Crash, 18″ Byzance Vintage Trash Crash, 8” ACM – Benny Greb – Crasher Hats.

Alex Rudinger presented a set based on hard-hitting, heavy metal punches from the bands he plays or used to play with  (Good Tiger, Revocation, Monuments). The hitting was so hard that one of the crash cymbals cracked very early into the set and had to be replaced. Even the jazz/fusion track titled “Another World“, written by bassist Evan Brewer, was an example of the metal approach to this style of music. Needless to say, Alex’s fans were already familiar with it. The artist closed his appearance with a track written by our friend Kaz Rodriguez and presented a number of really tasty fills in the composer’s style – a truly interesting rendition. Alex Rudinger can tick this performance off as a very successful one. The joy of playing was visible and the audience was immediately infected with it, which resulted in a very warm reception. The cymbals Alex used during his performance were as follows: 14″ Byzance Traditional Medium Hihat, 20″ Byzance Traditional Heavy Ride, 12″/16″ ACM – Luke Holland – Bullet Stack, 18″ Byzance Brilliant Medium Crash, 19″ Byzance Brilliant Medium Thin Crash, 18″ Byzance Brilliant China, 20″ Byzance Brilliant China, 8″ Byzance Brilliant Splash, 10” Byzance Brilliant Splash.

As said before, Aric Improta turned out this year’s sensation at Meinl Drum Festival. I won’t say “revelation” only because his acrobatic stunts had been known to many people from the crowd through YouTube before. One must admit that everything the man had done prior to the festival was taken to the next level in Gutenstetten. During his performance, Aric delighted the audience not only with his drumming skills and musicality while playing his songs and solo, which included elements of metal, djent, latino, gospel chops, and a whole lot of groove. He also focused people’s attention with his ingenuity. This concerns both the acrobatics (jumping on the drum throne, doing spins and a back flip to boot), as well as his use of electronics. A Roland SPD-SX and an Octapad were being constantly used. It wasn’t about triggering an occasional sample or two – those devices were an integral part of many of the rhythmic structures created by the artist. If we add tricks such as a special microphone connected to a whammy pedal for the man to modulate the sound of the elements of his kit (cymbals, toms, stands) and his own voice, as well as playing a rotating ride cymbal (naturally, also modulated with the whammy pedal), we get a vague idea of what went down on stage in Gutenstetten. Sonically, we could call it an original version of dubstep which is performed live. A much better version of dubstep, we may add. You have to see it for yourselves because no report, even as detailed as ours, can fully capture what Aric does with and to his kit. Although the man (as opposed to Benny Greb and Chris Coleman) did not interact verbally with the crowd, he was sending out messages with the help of voice samples discussing such topics as inspiration, creativity, self-improvement, etc. no doubt, those were Aric’s personal thoughts other drummers would simply have chosen to discuss between songs. A standing ovation which rang out immediately after the final back flip was very well-earned. The cymbals Aric used during his performance were as follows: 14″ Byzance Traditional Medium Hihat, 10″ Byzance Traditional Splash, 8″ Byzance Traditional Splash, 18″ Byzance Traditional China, 20″ Pure Alloy Medium Ride, 12″ Classics Custom Trash Splash, 16″ Byzance Vintage Trash Crash, 18″ Classics Custom China.

Miguel Lamas is an brilliant musician as well as an excellent and musical drummer. His jazz/funk/fusion grooves are true ear candy. The same goes for his sound, articulation, or the way he uses dynamics. The solo was based on a longer narration, which started off very low-key to be developed into something more dynamic later on. On the one hand, it was a nice change to what had just been presented by Aric, but on the other, one could see some people in the crowd still hadn’t shaken of the intense vibe and expected to witness similar stunts, which Miguel certainly is not about. This, however, does not change the fact that the man lived up to the difficult test of having to follow Aric Improta’s show. The cymbals Miguel used during his performance were as follows: 14″ Byzance Vintage Pure Hihat, 22″ Byzance Jazz China Ride, 18″ Byzance Jazz Extra Thin Crash, 22″ Byzance Jazz Big Apple Ride, 20″ Byzance Jazz Thin Crash, 8″ Byzance Traditional Splash, 6″ Byzance Traditional Splash, 8″ Byzance Brilliant Splash, 10″ Byzance Brilliant Splash, 12″ Generation X Filter China.

Luke Holland presented a pop-oriented set giving up hard-hitting metal tracks. He may have come to the conclusion that it didn’t make much sense coming up with stuff similar to what Alex Rudinger and Aric Improta had to offer. He was probably right, as it was clear to see that he had a strong following – people waiting to see him and savour his drumming regardless of the repertoire he chose to play. Even the metal heads in the audience stayed until the end of Luke’s performance contemplating his pop grooves. Good pop groves, we might add. The cymbals Luke used during his performance were as follows: 18″ Pure Alloy Medium Crash, 15″ Pure Alloy Medium Hihat, 21″ Byzance Traditional Medium Ride, 19″ Byzance Traditional Medium Thin Crash, 16″ Byzance Traditional China, 12″/16″ ACM – Luke Holland – Bullet Stack. The latter cymbal didn’t make such a big impression on us at the Meinl booth in Frankfurt this year, however, it must be stated that sat in the live mix perfectly when played by the man himself.

Chris Coleman is a true showman in the classic meaning of the word. He instantly made contact with the crowd with the help of his exquisite drumming, jokes and engaging the spectators in rhythm playing fun. The man divided the audience into three groups and every once in a while would give them a rhythm to clap so that they complement one another or result in a polyrhythmic figure when clapped simultaneously. Chris’ groove was just atomic while his solo strewn with juicy gospel chops (some of them many bars long) which were rewarded with instant rousing applause. This highly anticipated performance fulfilled the hopes of the entire audience jammed inside the concert hall and ended in a very long standing ovation. The cymbals Chris used during his performance were as follows: 20″ Byzance Extra Dry Medium Ride, 18″ Byzance Extra Dry China, 13″ Byzance Extra Dry Medium Hihat, 18″ Byzance Traditional Medium Thin Crash, 20″ Byzance Brilliant Medium Crash, 10″ Byzance Dark Splash, 12″ Generation X Jingle Filter China.

Exactly as it had been announced before the festival, Anika Nilles appeared on stage in Gutenstetten with her band Nevell. It was good to be able to listen to her steadily more confident drumming sit within the mix of a band. Boy, does it sit well! The band’s instrumental music, which can be described as fusion in the broad meaning of the term, included everything one could expect from a drummer: groove, some juicy fills or linear patterns. We had the impression that the crowd were perhaps waiting for more shredding while Anika was wise enough not to dominate the band with her playing. Nevertheless, the artist and her band received a very warm reception, which they undoubtedly earned. The cymbals Anika used during her performance were as follows: 15″ Byzance Extra Dry Dual Hihat, 20″ Byzance Extra Dry Thin Crash, 22″ Byzance Extra Dry Medium Ride, 18″/18″ ACM – Anika Nilles – Deep Hats, 20″ Byzance Traditional Extra Thin Hammered Crash, 10″ Byzance Extra Dry Splash.

In addition to all the attractions mentioned above, the festival attendees could also take part in the Meinl VivaRhythm drum circle with Toki the facilitator, take a guided tour of the Meinl cymbal factory, as well as visit an exhibition of Meinl Sonic Energy instruments and treat themselves to a “sound massage”. Those interested in the business side of being in the drum industry could attend talks by Siroz Vaziri on goals and lifestyle, content creation, as well as communication and networking. The organizers and artists who appeared on stage in Gutenstetten this year deserve a big round of applause, as they all rose to the occasion, which certainly wasn’t all that easy.

Drummers and Drummerettes! With no further ado, BeatIt give you a video report from Meinl Drum Festival 2017! Enjoy!