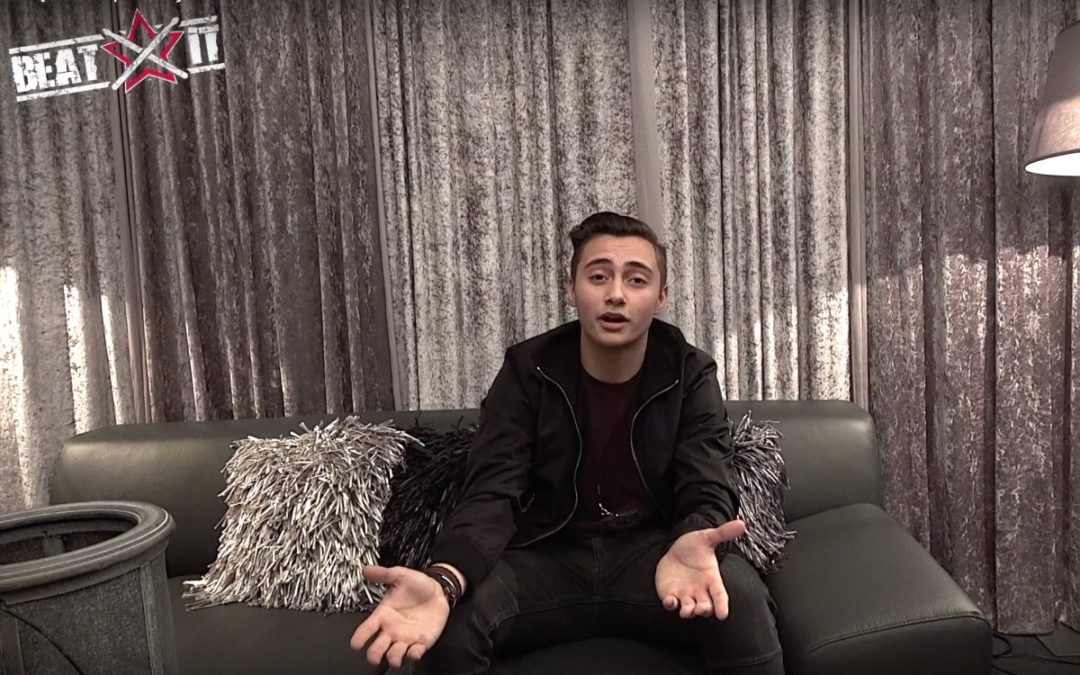 On June 7, we took a three-hour drive from our HQ to the German capital already to have an encounter with Nic Collins – the son of the legendary drummer, singer and songwriter, Phil Collins. Although 18 years of age, Nic very smoothly, eloquently and professionally talked and walked us through his Gretsch drum kit with Remo skins, Sabian cymbals and Roland electronics he has been using on the ‘Still Not Dead Yet Live‘ world tour with his father (see: HERE). We also filmed a short interview with Nic, in which he told us about five of his favourite drummers. Enjoy!

“I’m gonna start off with my favorite drummer of all time and the best rock drummer of all time – John Bonham. What he did on the drums shaped what a rock drummer really is. The music and the parts that he made with Led Zeppelin are timeless. Countless iconic drum parts. Whenever somebody asks me to do a line check with the drums, it’s ’When the Levee Breaks’, ’Fool in the Rain’, ’The Crunge’ or something. The stuff that he was able to do on those big drums, the sound he had and the bass drum stuff that he did with one pedal, where he does some stuff that people can’t even do with two. He’s definitely up there in my top 5.”

“I can’t be doing this gig without mentioning my old man, Phil Collins. Obviously, his drumming kinda shaped the drummer I am, especially on the gig, doing his music, and also back home with the drums he used and just the songwriting. I think the great thing about his drumming is the chops included in the Genesis stuff but also playing the part for what the song needed rather than making it complex and trying to be interesting. It was always the perfect part for the song. I’ve had to sit down and listen to his entire catalog over and over to make sure I’ve got my stuff down. Every single time, there’s nothing you could really change with some of his parts. So he’s up there.”

“I’d also go with Chad Smith from Red Hot Chili Peppers. RHCP are one of my favorite bands but Chad Smith was kind of my first drumming hero when I first started delving into the history of drumming and rock drumming. He’s got one of the best grooves out there. What I really admire about Chad Smith is when he first joined RHCP as just a rock drummer, he practiced and really mastered drumming because now he blows me away every time I see him live. I’ve had the opportunity to meet him and he’s a great guy. I love everything he’s done with the Chili Peppers. Kept it fresh but he still has that signature Chad Smith sound.”

“Then, I’d go with Taylor Hawkins from Foo Fighters. A bit newer drummer. I could sit here and name all the historic drummers – the Neil Pearts, the Keith Moons, the Nick Masons, but I’ll keep it a bit new. It’s tough to come into a band when you’ve got Dave Grohl (also one of my favorite drummers) as your band leader. There’s something about Taylor. I’ve also had a chance to meet him – a great dude but also an amazing drummer. Same as Chad Smith, he’s kinda refined his sound as something that really stands out. All of his drum parts are clearly good enough to impress Dave Grohl every time they write a song. Taylor’s a phenomenal drummer. I also have a sweet spot for people who use Gretsch drummers. And he uses concert toms as well. What’s there not to like about Taylor Hawkins?”

“For the final drummer, it was tough coming up with the list, but just for variety’s sake, I’m gonna go with Steve Jordan. There’s so many videos where you just sit there and hear him play a song, he doesn’t have to do any fill – just kick, snare and hat – and it’s one of the best things you’ve ever heard. In my opinion, he’s got probably the best groove in the world. Everything he does is ’less is more’ mentality. Especially the stuff he’s done with John Mayer. He’s just a great musician as well. When I talked about my father playing what the song needs – that’s what Steve Jordan does. Doesn’t make it too complex but he can outplay any drummer who can do all the chops in any second but just with a simple groove. He’s just got it. It inspires me because I’ve always been one of those drummers who are more about the groove rather than anything else. Chops are great and fun to play but really groove’s what gets you the gig at the end of the day.”