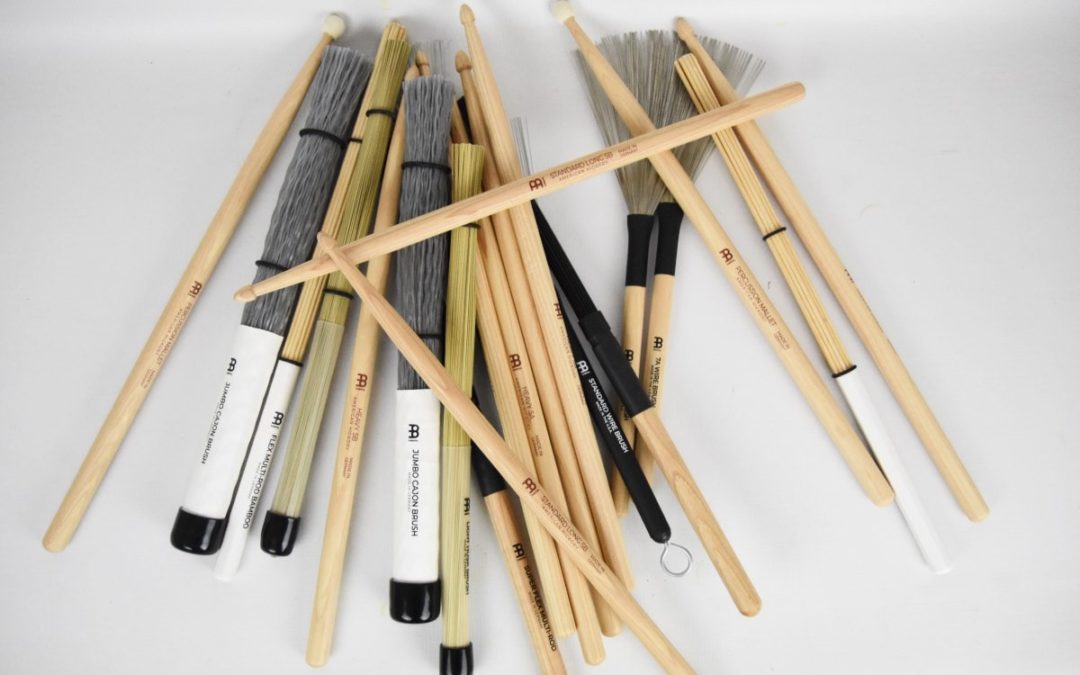 Not so long ago, we received a shipment from Germany, the town of Gutenstetten, to be exact. As all drum maniacs out there know, that’s where Meinl company is based. Inside the parcel, there was a lot of drum equipment, which we immediately started to test thoroughly. The test results are shared with our viewers on a regular basis. Today we would like to present to you Meinl Sticks & Brushes. 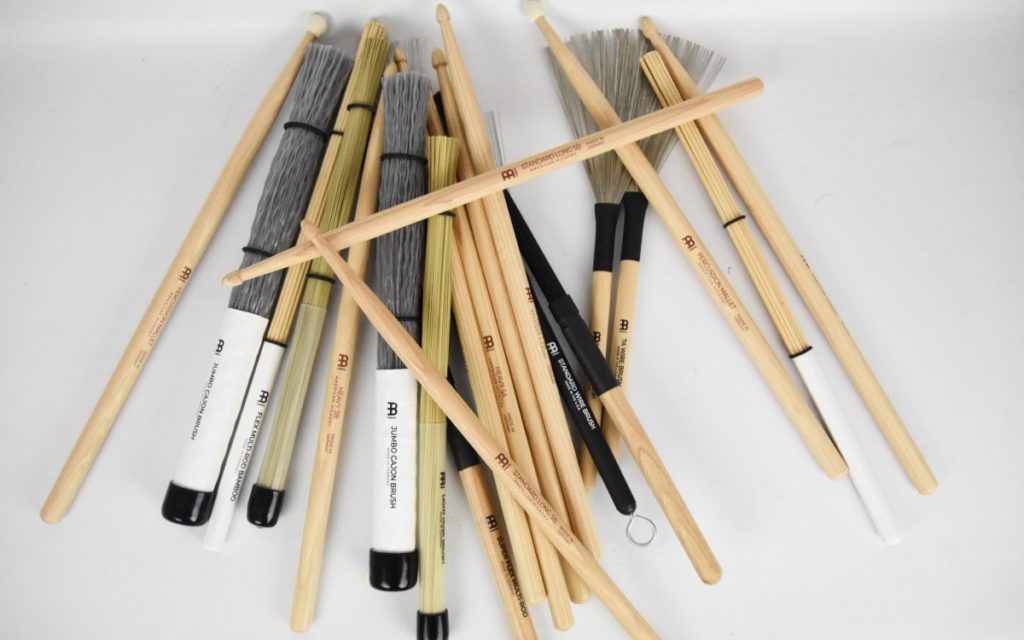 In 2018, Meinl started the production of all kinds of sticks, which we informed about HERE. We tested each pair of sticks sent by the producer.  We started with single strokes on the cymbals and the snare drum. Then, we played a few simple rudiments and other rhythmic figures that helped us to determine more precisely what sound a given stick produces and how it was balanced.

Standard Long 5B sticks are great for swinging or lighter playing. When we hit our cymbals with the tip, the sound is pleasant to the ear. Thanks to its light weight, the stick excites more high frequencies while generating a warm, pleasant wooden sound. These sticks are great for playing classical and film music, where we often have to play with extremely diverse dynamics. The way the sticks are balanced facilitates playing rudiments.

The 5A Heavy model, like the Standard Long 5B version, excites high frequencies. The sticks are slightly differently balanced, which means they have a different bounce specification. When it comes to playing a ride cymbal, the 5A Heavy sticks are better suited for swinging and playing faster rhythmic figures. It is different when it comes to playing the drum kit. The rebound is quite clumsy, heavier in controlling than those produced by the Standard Long 5B. As far as rimshots go, the sticks vibrate a bit and this may cause some discomfort when playing for a longer period of time.

Meinl Stick & Brush Heavy 5B sticks are noticeably thicker than the Heavy 5A model. Probably due to this fact, one does not feel the unpleasant vibrations that could be experienced in the previous model we tested when playing rimshots. The sticks are rather intended for playing heavier types of music. Thanks to the weight of these sticks, the cymbals and drums deliver a full sound. Even when playing louder, the sound obtained from the instruments is still just as full. This is not a whining sound, which is often caused by excessively heavy sticks.

Meinl Heavy 2B sticks are definitely the heaviest of today’s players. The sticks produce a huge impact as they are heavy and relatively thick. Very ‘eavy metal…

We all know what brushes are, but how many of us can admit with all honesty how many “butt hours” we spend on improving our brush playing technique? We suspect it is not very many, which is why we introduce two of the five models of brushes that Meinl have launched on the market.

The Meinl Standard Wire Brush is a metal brush while the handle is made of rubber. The brushes are mainly intended for quiet playing. The wires are thin, medium soft and quite thick. When playing with such techniques as sweeping or tapping, the brushes produce a clear and audible sound.

Unlike the Standard Wire Brush, there is no wire adjustment here. Another element that distinguishes the 7A Wire Brush from the previous model is the fact that it makes playing faster fills or even doubles easier. The producer says that the wires are medium soft on both models, but it seems to us that the brushes with a wooden grip are harder and generate much louder and thicker shuffles.

As we know, rods are used primarily for quieter playing but also for experimenting with the sound of instruments. 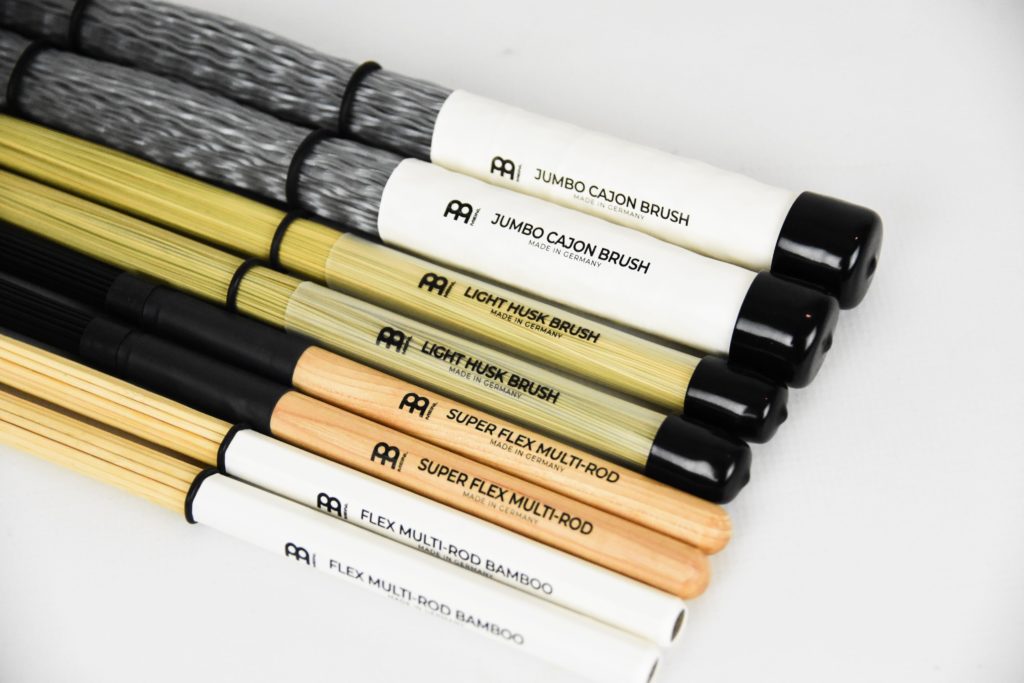 These are the most ordinary rods made of bamboo, which every drummer and drummerette has seen or played at least once in their lives. When using this kind of sticks, you can hear a characteristic ‘crack’. It accompanies practically every hit, no matter if stronger or weaker. Unfortunately, by playing rimshots, the sticks the rod is made from quickly wear out. Thanks to two rubber rings, we can tighten or loosen the sticks. Bamboo generates quite a lot of low frequencies, which means the rods will be great not only for playing drums but also the cajon.

This model of the rods was made of wood and nylon. They are are very flexible thanks to the material the “bristles” were made from, which is why the rods gain greater durability than those made of bamboo. Thanks to the use of rubber clamps, we can regulate the hardness of our rods.

These sticks are a hybrid between brushes and rods. They were made of sorghum grass. They offer less attack than standard rods but they sound really nice to the ear. Adjustable O-rings allow the player to change the spacing of the bristles, just like on a pair of brushes.

Despite the fact that these rods were designed mainly for playing the cajon, they are great when playing on a drum set. Thanks to the large amount of polymer bristles, the rods produce a pleasant hissing sound. In addition, if we move the rubber rings towards the grip, we will get even more swoosh sound, which will be great not only for playing on toms, but also in combination with thin cymbals, which gives us great opportunities to experiment with different sounds.

All the sticks rods and brushes that we received from Meinl were of the highest quality. The sticks are all properly balanced, there are no knots on them and they are very durable (BeatIt’s very own Maciek “Ślepy” Głuchowski tortured one pair for 10 hours at the Pol’and’Rock festival and they survived). The only downside we noticed is the rather soft wood which the snare drumsticks are made of.