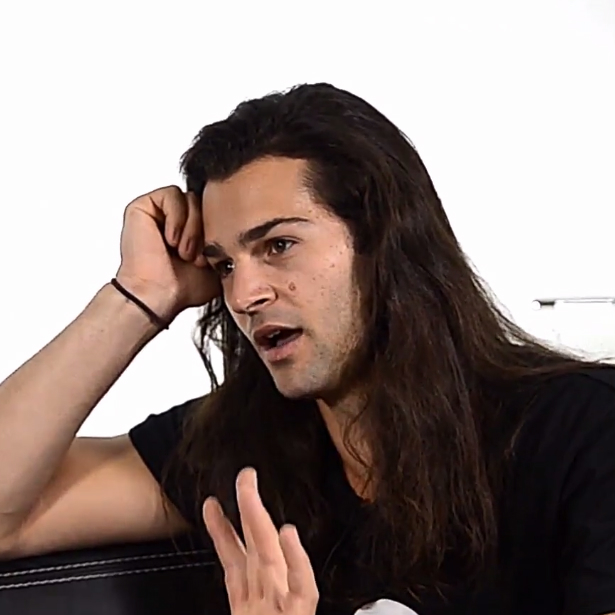 The 12th edition of Meinl Drum Festival, which was held on July 1 at the company’s HQ in Gutestetten, Germany, was full of attractions and excellent drum performances (you can find our report HERE). It must be stressed that it was yet another successful Meinl event, which was organized very well (if not perfectly). From drummers’ performances and signing sessions through to an exhibition of the drum kits used by the artists at the festival, exhibitions of Meinl cymbals and percussion instruments as well as Tama drum kits (Starclassic and Star series), the drum-playing soundproof booth, the transportation, food and sanitary facilities – everything was organized with true German precision. The BeatIt team had a nice private chat with Craig Reynolds from Stray From The Path and interviewed the real sensation of the festival, Aric Improta.

“The Meinl family are exactly that – they’re family, they’re incredibly nice, they’re taking care of us. And Beyond that, getting to meet all these different artists. It’s amazing to see people who are so talented be so humble and so down to earth. It’s refreshing ‘cause that’s not always the case. The experience has been good so far and I’m just anxious to play.

My band and I grew up in Southern California in the late 1990s. Skating, punk and hardcore was all we wanted to do. I never thought I’d be doing stuff like this festival. I always just wanted to be in a band. So if I’m gonna be up there alone, I feel I have to do what’s most comfortable for me. That kinda was the natural reaction, I guess. That’s how I play in my room, that’s how I’ve played with every band. I’ve always been jumping up, yelling. It just feels like home, I guess.

[When I was young] I loved playing in bands but, as far as practicing on my own, it was very hard for me to develop the attention span for something like that. Even with sports, I would do stuff and then move on to the next one. I’m very happy that I stuck with drums because I wouldn’t have guessed that would have happened when I was younger, you know.

I have to always prioritize durability ‘cause I hit too hard. Fortunately, Meinl Byzance Traditional hats can handle that. Honestly, growing up, most of the cymbals that I played that are built for durability sound terrible. So it’s refreshing to work with Meinl and actually have them make something that sounds good and lasts. Those are my only hi hats since I’ve worked with them. I think that was listening to those first marveled records and how John Theodore would use a stack. That was the desired effect of adding the [Meinl Classics] stack into the set. When I first hooked up with Meinl, they sent me some cymbals that were comparative versions to what I played and I just picked what felt natural. I’m not opposed to bright or dark. It just has to work with the project that I’m working with. I need to focus a lot on the bell, especially in this solo, because I’m doing some work with a whammy pedal and a delay. I’m pitch-shifting the tone so I needed something that would project enough. Fortunately, the Meinl Pure Alloy bell sounds great so it’s worked out very well.

I have a Tama. Usually, I play maple but I’m playing a bubinga today, which is really cool. It’s 12” rack tom, 14” and 16” floor toms, 22” kick, 14” snare. It’s just comfortable. That’s what I grew up playing. In a situation like this, where I’m throwing stuff that I didn’t know how it’s gonna go, I jump on my kit and I do these three sixties but I don’t know if I’m gonna land or what’s gonna happen. I need to keep things as comfortable as I possibly can and hopefully get to the end of the solo. We’ll see. I have an aluminum S.L.P. [snare] at home. I don’t actually know what I’m playing right now. It is an S.L.P. I haven’t actually talked to anybody what it’s made of but it sounds great. Surprisingly, I usually like the ones that come with the kit so the one that came with my Starclassic was good. I know a lot of drummers look for another snare drum to go with their kit the minute they get it but I like the one that came with it.

I use the [Tama] Iron Cobra [pedal]. This is the first show I haven’t used my personal pedal so we’ll see how it goes. Once I switched to the Iron Cobra, I found that I can get more projection with less effort. When you get into faster playing, you kinda need that, especially with single kick stuff. It’s been great.

[My skins are] Remo Coated Emerors, a CS on the snare and Powerstroke 3. I still don’t know if I like the coated or the clear one on the kick better. I kinda switch between the two.

We [Night Verses] are working on a record right now and it’s a progression for us in the sense that the last one was as punk as it could be. It was gritty and more based on being driven by adrenaline. There was no click. It was that direction ‘cause we grew up listening to bands like At The Drive-In and the hardcore scene that was Orange County at the time. This record will be a step away from that. It’s to a click. It’s probably the most technical stuff we’ve done and it’s exciting. I feel like we need to have something that can keep us going and we never want to make the same record twice. It’s been fun getting it ready.

I’ve said this before in interviews: I’m a pretty controlled person when it comes to being in public. With drums, I just feel like I don’t have to worry about anything. I’ve always gravitated towards artists and performers that just let their true personality come out. They become incredibly vulnerable but they’re OK with that and everything is left on stage. I feel like I need that. I don’t know if could be as level-headed in my life if I didn’t have a place to scream as loud as I could, jump and try ideas that I feel safe in if they fail. I’ve tried things before that I thought would be cool and they ended up terrible. Certain things that I never would have thought would have worked ended up great. It’ probably the one place that I do that most frequently. It’s been good for that.

For this festival [Meinl Drum Festival 2017], I cut out almost any regular working out because I just don’t want to be tense, even at rehearsals. I was getting this ready five hours a day. Especially in the final stages when I was running the solo over and over I would play for 3-4 hours, take a break 3-4 hours. I ended up losing six pounds just getting this ready. For this thing, it was more about endurance than anything else, but when I was getting ready for the back flip, it was a completely different preparation. It depends on what I’m working on. On tour, you just try to get enough sleep. That’s pretty much all you can do. You want to have some kind of regular exercise regime but between 8-hour drives in the middle of the night, playing in a club where there’s no air conditioning and you’re covered in sweat, and you only get one shower, it’s not always convenient to find time to do push-ups or run or anything like that. Your time on stage is your opportunity to get exercise. You also do your best not to eat junk food the entire time ‘cause that’s really what we can afford.

If somebody would pay for it, I would love to play upside down under a helicopter. I don’t have a budget for that right now. This was never part of the plan. When it happens and I have the time, I’m very happy to prepare for it. I’ve prepared a 40-minute solo for this festival, so I don’t know when the next time will be that I have a break in my schedule to put together ideas. It would include some stuff I’ve done before but, ultimately, I’d like to do something new. I’m not gonna go back and redo the drum solo I did for Guitar Center Drum-Off 2012. It has to work with the schedule but it’s never necessarily in the plans to do another one. I like stuff like this when I can do it because it’s uncomfortable for me. In all honesty, performing by myself has never been something that I’ve enjoyed as much as playing with the band. It forces me to find a way to be entertaining for 40 minutes. It really makes you rethink what you’re doing and make things more visual and focus your tension and release. I have a lot of friends that are drummers but I don’t play with a lot of drummers, so it’s opportunities like this that help me grow.

I loved getting to go to Korea. That was a blast. As far as the band, it’s more of a general thing. Growing up with somebody you play with from 12 to 28, to get to travel 23 different countries feels like you did something right. We’ve always loved what we played, even when it was terrible but getting something like that is more like a retrospective appreciation. I feel like that, more than anything else, has made me feel like I’ve been doing the right thing for myself and my personal goals.”

Drummers and Drummerettes! Here is Aric Improta in an exclusive interview for en.beatit.tv! Enjoy!