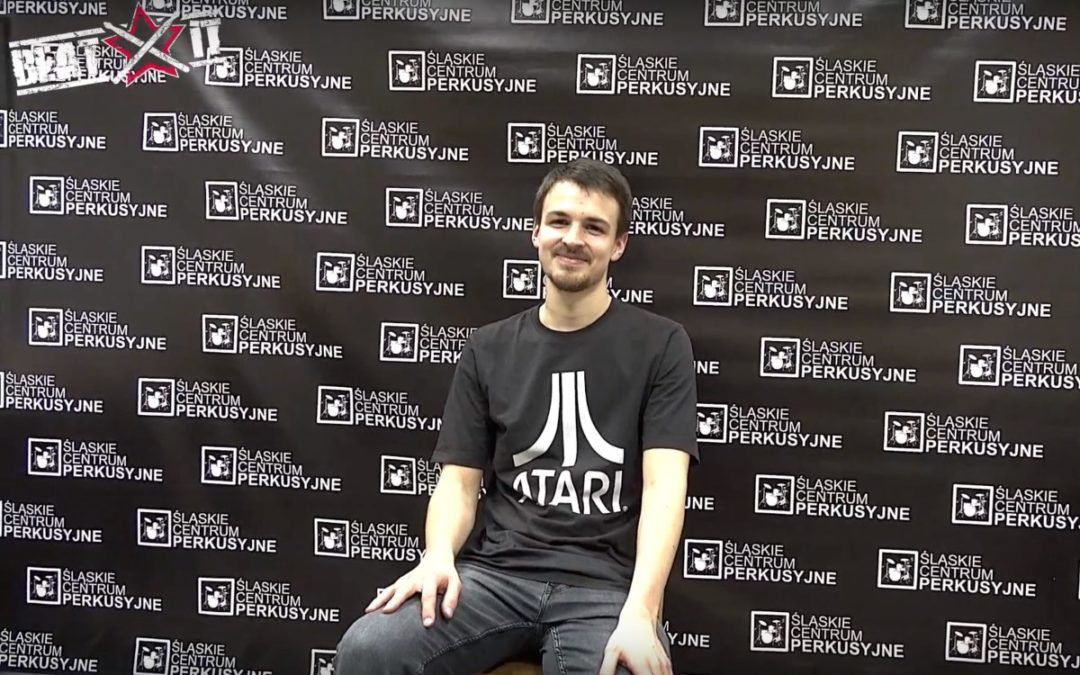 The first artist to perform on the day was Wojtek Deręgowski – an excellent young drummer, who has been consistently building his career based on social media as well as work on the road. Below, you will find an interview with this promising drummer and educator:

BeatIt: Wojtek Deręgowski at Silesian Drum Festival 2018 in Chorzów, Poland! Let’s go back a couple of years to the Meinl Drum Festival held in Warsaw. I told you then it wouldn’t be long before you played.

Wojtek Deręgowski: You foresaw that.

BeatIt: What are your impressions after your performance?

W. D.: I’m very pleased. I didn’t have it all planned out step by step. I’d outlined basic topics I wanted to cover but I also knew Q&A was going to be a part of my appearance. I knew I was gonna do two tunes at the start and a solo at the end. The solo was done off the cuff, I didn’t know what I was gonna play until the last moment. I think it went OK.

BeatIt: Sure. We liked the interaction between you and the audience, which doesn’t happen that often at such events.

W. D.: Yes. Quite often, there’s no reaction and things get a bit awkward. Luckily, questions were asked and there was no awkward silence.

BeatIt: You also revealed a few secrets. Education is about selling knowledge. Those who bought tickets and came to the festival left with some knowledge.

BeatIt: What you did was a workshop after all.

BeatIt: You said you didn’t prepare very meticulously for the performance but had some concept of it. Are you thinking of taking this kind of thing further? Are there any plans of doing more events of this kind? I believe there’s another workshop you did not very long ago or are going to do very shortly.

W. D.: Yes. There’s more and more of these drum workshop type events. Obviously, I plan to do more of them because I like to do it. I like to meet drummers as opposed to regular audiences who simply come to listen to music. Regular people often don’t pay attention to the drums. It’s good to have an audience who understands and can react to the details of what I do. I did a few drum workshops before this festival. It was in Opole, Toruń and a few more cities. I have plans to do more. One date is already confirmed. It will be in Warsaw.

BeatIt: Tell us about it.

W. D.: Yes. There’s also something brewing in Kraków so there’s more and more of that happening for me.

BeatIt: Some time ago, you launched your own online shop with drum lessons. How is the project going? What are your plans with regard to that? Do you sell only in Poland or internationally as well?

W. D.: It’s been developing very nicely. Slowly but surely, things are going in the right direction. Most of my customers are from outside of Poland. Probably because I do my lessons in English. I speak and write in English. It’s because Instagram reaches viewers all over the world, not just Poland. I’d say less than 1 per cent of my customers are Polish people. I made a conscious decision to write out and conduct my lessons in English to reach a wider audience. Most of those who buy my videos are based in the US. As far as my plans go, I want to further develop my online shop. There’s moments when I have more time for that and there’s more busy periods. It depends on how much I’m gigging ’cause these things come and go. I’m glad I made an effort to launch my lessons and I’m certainly going to continue to develop that.

BeatIt: What are your plans as far a music is concerned? What are you doing these days? Who are you playing with?

W. D.: Right now, I’m in four bands. Drummers are always saught after… It’s pop singer Monika Lewczuk, who I’m more busy with in summer. This gives me more time to play club dates with the other acts in the remaining part of the year. Those are: Sorry Boys, Marcelina and Rosalie, whom I started working with very recently. I haven’t done too many gigs with her, but there’s more coming soon.