Snare drums of all time in a nutshell 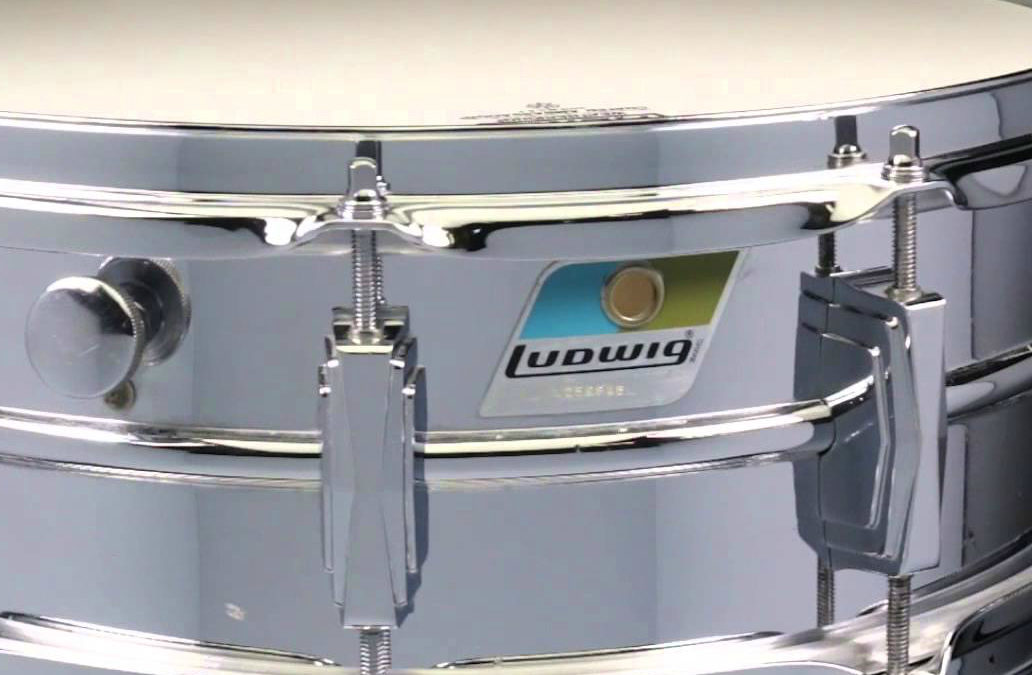 The world of musical instruments is the sum of all the souls of the musicians who have played them. Even the quietest note will always remain a part of us, the record of our feelings, musical experiences and expression… 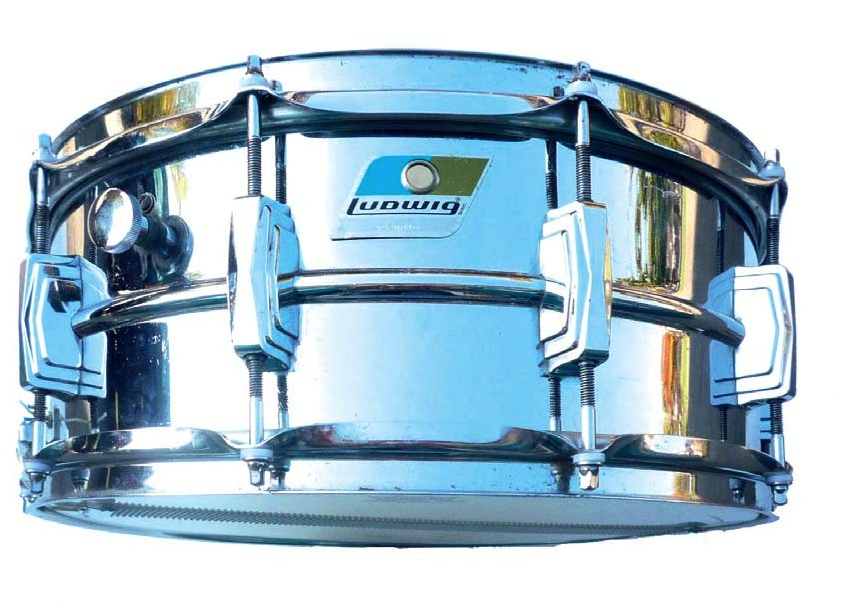 Out of all the percussion instruments, the snare drum has always compelled my greatest respect. The multitude of models, materials, shell finishes, lugs, strainers, rims, or sizes have always caused me to have butterflies deep in my stomach. Although I have had dozens of snares in my hands over the last few years, I still drool like a Pavlov’s dog each time I see a vintage Gretsch or a Ludwig that’s well-maintained.

A drummer could own a single professional drum kit for all of his or her musical career – one that is very expensive and very well-pampered. It would be virtually impossible to fall in love with only one snare drum, though. I think it would be beyond a drummer’s control. In my opinion, the snares I’m going to discuss below are absolute classics. Each of them has survived decades of introducing more and more new, innovative solutions and approach changes absolutely unscathed. Each of these “oldtimers” still sets the tone (pun intended) as far as new developments, trends and people’s tastes are concerned. 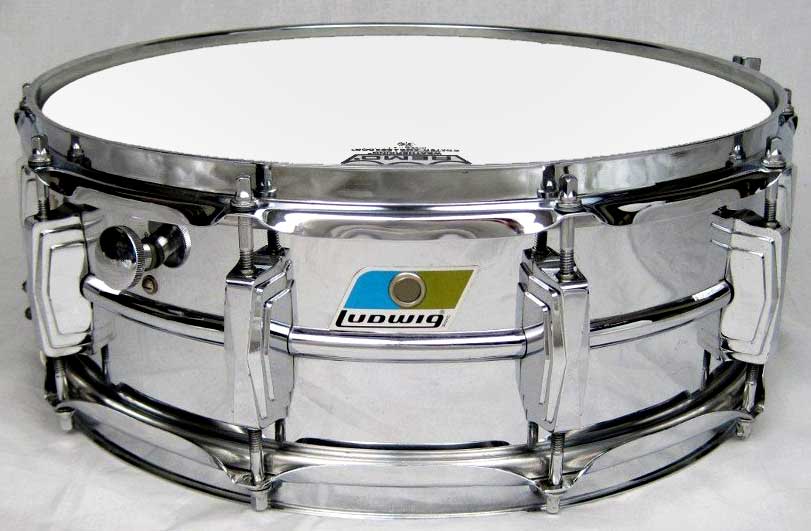 Ludwig Supraphonic. Invariably, a legend, and possibly the most frequently recorded snare drum in music history. After over 50 years since it found its way to American music stores, it still hasn’t lost its charm, and appeals to most drummers, no matter how old they are.

The first Supraphonic snares were released in the early 1950s. Until then (starting from the early 1920s right until the late 1930s, to be exact), Ludwig had already had their flag ship snare drum, i. e. the Black Beauty. However, its production was discontinued for reasons I am not aware of. The Supraphonic entered the market around 1952. It would be more or less safe to assume that it was built somewhat based on its older brother, as the same brass shell was applied. Most of the remaining elements (such as lugs, strainer, etc.) were changed.

The classic Ludwig Supraphonic LM400 has a brass shell covered with chrome (Chrome Over Brass, COB). It is equipped with typical Ludwig Imperial lugs, the P-83 strainer (later P-85) and pressed triple flanged hoops. Shell thickness has been changing in both directions over the years. Generally, we can say it is about 1.6 mm. Please note that in all Ludwig flagship snare drum models (Supraphonic, Acrolite, Super Sensitive, Black Beauty) shells become thinner as we approach the bottom edge. Usually, at the top edge, the shell will be 1.8 mm thick, whereas at the bottom, it is 1.6 mm.

Since the 1970s, the Supraphonic hasn’t undergone any drastic changes. New shells have been introduced, such as hammered and standard bronze, hammered steel, Gun Metal brass (graphﬁte mat finish). Well-known models were merged into one (mostly for marketing reasons), which is why one may come across a Supraphonic Black Beauty snare as well. The changes also concerned the hardware. For example, since 2007, classic Keystone lugs were replaced in some models by tube lugs, the P-85 gave way to the characteristic Dunnett throw-off, while die cast hoops were mounted instead of the typical triple flanged hoops. If we are to believe the manufacturer (why shouldn’t we?), one thing remains unchanged, i. e. highest quality shells made in USA.

As far as Ludwig Supraphonic endorsers and users are concerned, it is probably easier to list those who don’t play them rather than those who have them in their collections. Most notably, the list of Supra users includes the likes of John Bohnam, Joe Morello, Ian Paice, Ginger Baker, Mitch Mitchell, Carl Palmer, Steve Gadd, or Charlie Watts. And how many can’t publicly admit they have those babies in their arsenal (Portnoy? Carey?).

It is no secret that 90% of professional recording studios have a Ludwig Supraphonic on their backline lists, which means those instruments are constantly used at numerous recording sessions from classical music through to death metal.

On many forums, people ask the same question: “Is my Supraphonic made from brass?”. This must be quite an issue with users since a number of methods have been devised to determine the type of building material in situations where the serial number or visual inspection can’t help. The first method is the so-called “magnet test”, where a magnet is placed next to the drum shell. If it sticks to the shell, our Supraphonic is made from steel. If it doesn’t, we have a brass or an aluminum shell. The second method is to delicately scrape off the chrome layer inside a screw hole under a lug. The third and least reliable method is to weigh a given snare drum. Brass is rather heavy, so it will weigh more than steel (4 kg and 2.5 kg respectively). 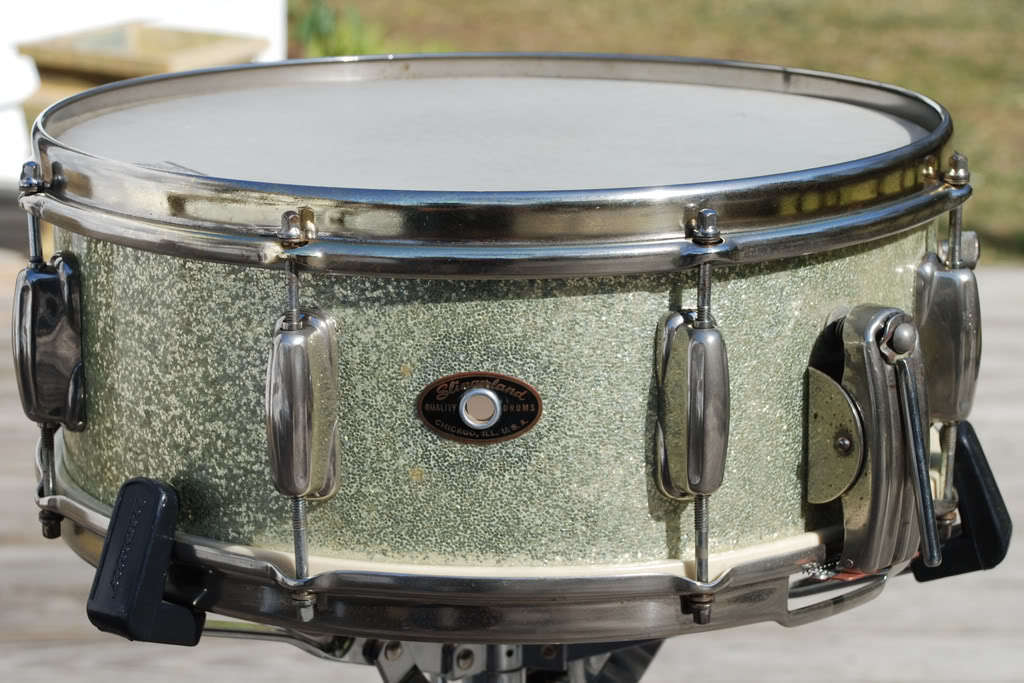 Slingerland Radio King. The Slingerland brand isn’t very well known in continental Europe. The reason is quite simple: after a hugely successful period in the American market in the 1950s and 1960s, the company fell into lean years (which I think are still continuing) and has been much “quieter” since. In the 70s, it was definitely Ludwig that took the leading position, which is why Europeans (especially those living in Central and Eastern corners of the continent) associate the latter name with all things vintage. Such legendary brands as Camco, Hayman, or Fibes are still a little bit of a mystery in this part of the globe. Possibly, not only here.
On the other hand, a Polish manufacturer named Słowik spent many years copying Slingerland’s design in his instruments and accessories rather than anybody else’s.
The Radio King first found its way onto shop shelves and displays in 1935, and has remained Slingerland’s flag ship since then. As opposed to other wood snares from the era (which were made from mahogany plywood shells), the Radio King was built from a single piece of maple reinforced with firm rings on the inside. Those were largely responsible for the instrument’s perfect shell shape, and initially were 2 inches high!
At the time, Slingerland’s hoops caused quite a stir. They were pressed, but already heralded the arrival of the Die Cast solution. Today, such rims are known as Sonic Saver Hoops (Mapex) or S-Hoops. In the manufacturer’s 1951 catalog, we see nine different finishes (mostly sparkle), whereas the company’s offer from 1965 was enriched by fifteen more colours (mostly pearl finishes). The 1965 catalog also announces the first incarnation of a brass shell for the Radio King (COB once more) :)).
Since its birth, the Radio King has been divided into three subgroups: signature models (e. g. Gene Krupa), Concert Radio King, and Student Model. The difference between them was mostly the plywood applied, the hoops, as well as the lugs.
Slingerland’s prices in the 50s and 60s seem rather low compared to those one would have to pay today. In 1951, a lacquer finish 14″x7” snare cost 76 US dollars, while the catalog price of a 14″x8” was 77 bucks. Fifteen years later, it was 80 and 82 dollars respectively. 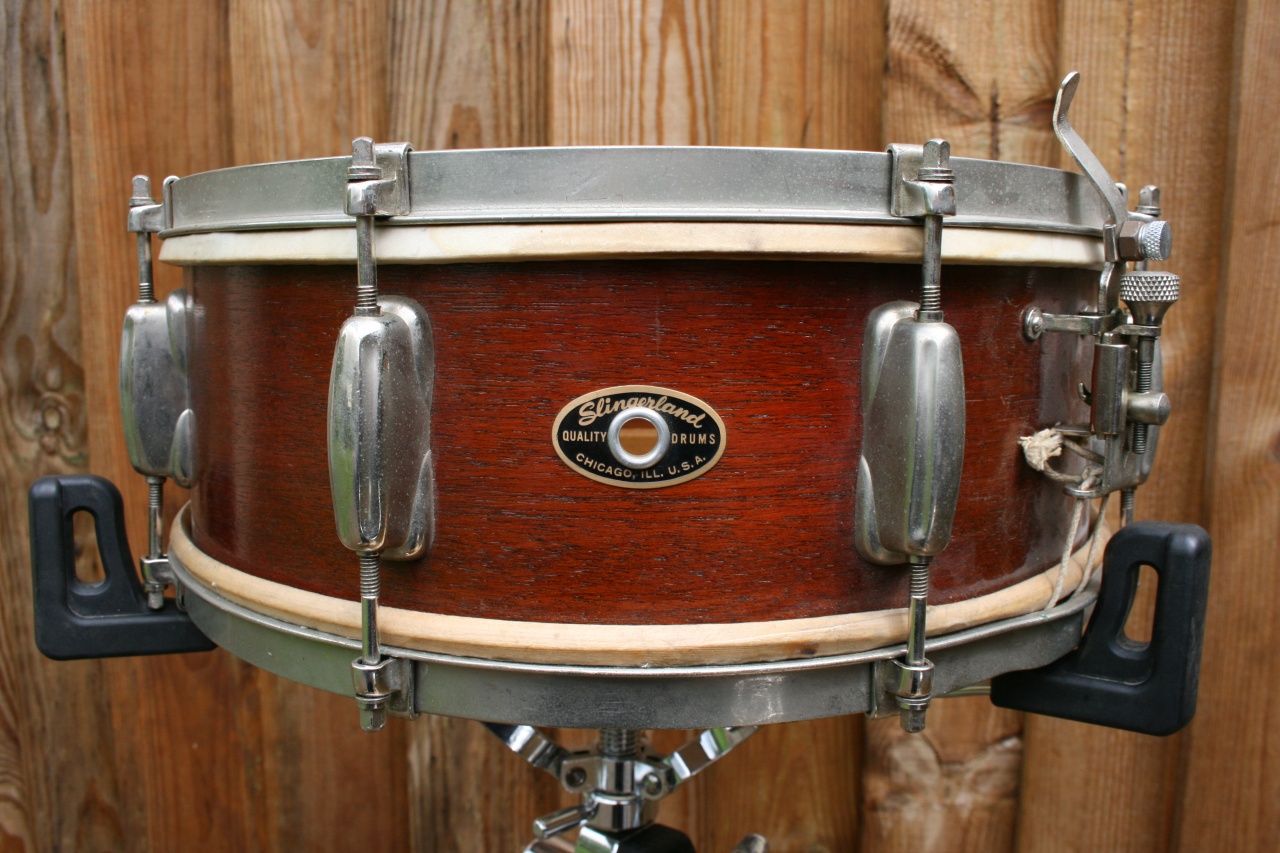 Back in the company’s heyday, Slingerland’s tag line was “Four in five big names in drums play Slingerland Radio King”. Those big names included the likes of Buddy Rich, Gene Krupa, Ed Shaughnessy, or D.J. Fontana (Elvis Presley). Indeed, it didn’t get much bigger back then. 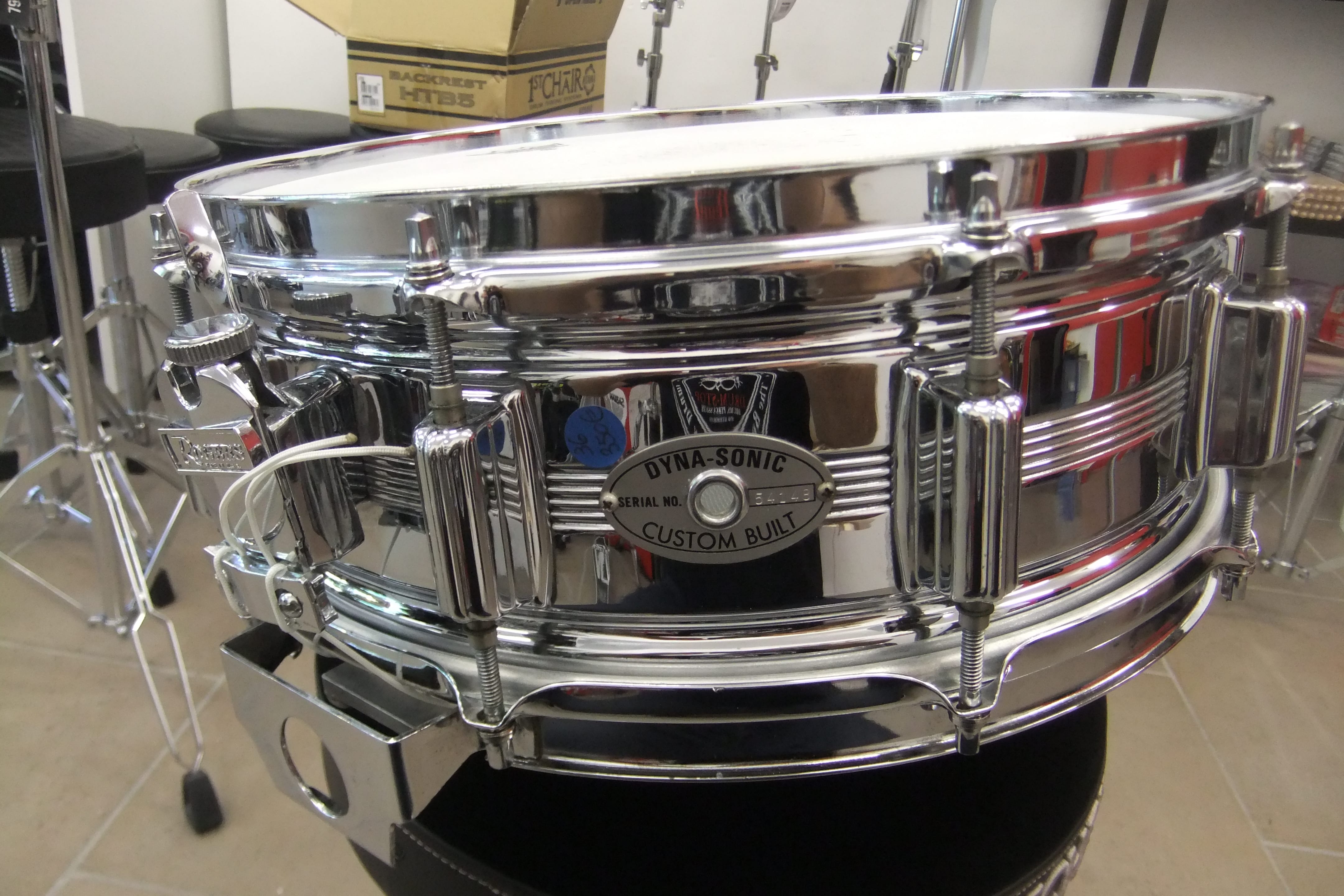 Rogers Dynasonic. Probably the only cult classic from Rogers. A global classic, though. Designed in a fashion similar to the other classic snare drums, which is the good old chrome over brass – a heavy brass shell covered with a thick layer of chrome. The Dynasonic first emerged in the early 1960s. It is now difficult to say whether the first models were made from wood or metal. What is certain, though, is that this snare is the best selling Rogers product ever.

The wood shells were made from maple plywood with reinforcement rings. They were available in three sizes (14”x5″, 14″x6,5”, 15″x8”), with pearl wraps (initially 14 colours, later also sparkle finish). Browsing through those old catalogs, one immediately notices wood was slightly “discriminated against” as far as the Dynasonic is concerned. Clearly, the manufacturer favoured brass as building material, which seems to have been a good gamble and one of the main reasons for this drum’s magnificence.

Metal snares used thick brass shells with 7 lines located centrally, which (according to the manufacturer) were supposed to make the sound sharper and more colourful.

Except for the difference in materials, the remaining technical aspects were the same for both Dynasonic lines (wood and metal), i. e. 10 tension rods, triple flanged hoops, and cast lugs. 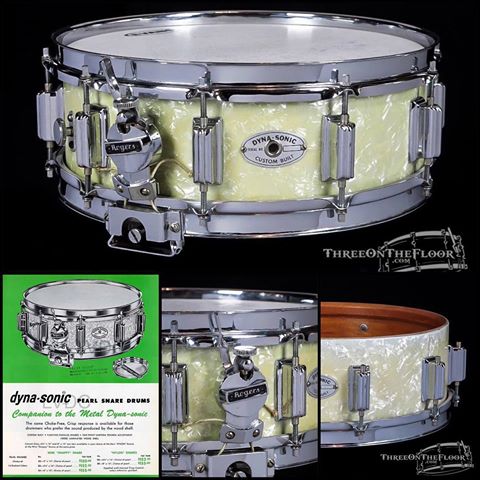 In order to buy a well-maintained instrument these days, you have to have about 500 US dollars. 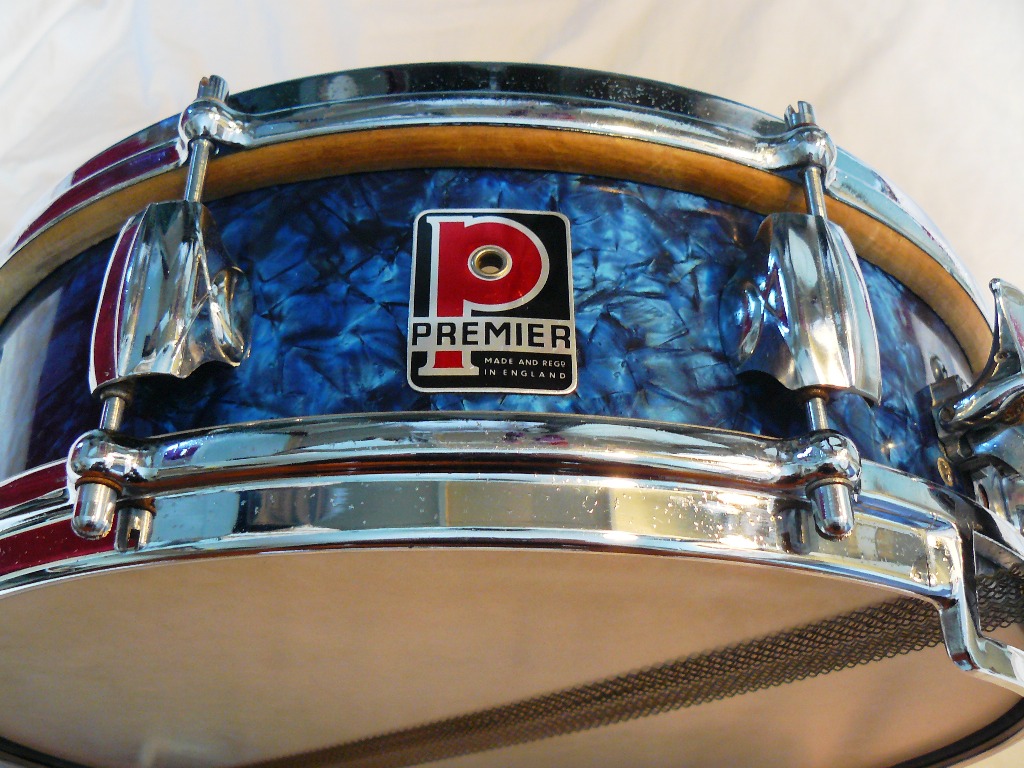 Premier Royal Ace. Premier (slightly forgotten nowadays), was a leading drum manufacturer in the UK and Europe in the 70s and 80s. Catalogs from the era are good proof of that. More or less once every two years, the production line would be changed, and new interesting series of instruments with innovative solutions released. It is hard to believe that as early as 40 years ago mass produced Premier drums featured finishes which today can only be found in expensive, custom-made instruments.

It is worth mentioning that Premier started using maple to make their snare shells as late as in the early 90s. For five preceding decades, the company’s preferred plywood mix was a birch shell reinforced with beech rings.

Premier’s 1963 catalog describes the Royal Ace in the following fashion: „Designed primarily for the drummer working with small combos and modern jazz groups. Sharp response and overall clarity enable fast, staccato rhythmic patterns to cut through better with less effort“. Already back in the day, drummers had a choice between wood and metal.

Along with the Royal Ace, Premier introduced a major innovation in their snare drums. It was double wire tension adjustment via a knob at each end, connected by a central bar inside the shell. The entire mechanism would lift or lower the snare wires at each end simultaneously. Here is what the manufacturer had to say about this solution: “The parallel snare action keeps the snares always under tension. Unwanted snare ‘buzz’ is completely eliminated“.

Unfortunately, I am unable to determine for how many years Premier manufactured their Aces. What I do know for sure (because I’ve had three of those) is that they don’t sound very universal by today’s standards. They are dry and hard-sounding while their attack is somewhat dullish and nondescript, i. e. doesn’t go up nor down.

All the descriptions in this article are merely a drop in the ocean of stories about these wonderful instruments. Each of them was handmade by highly qualified craftsmen, thanks to which they still look and sound great, even 60 years on.

When purchasing an instrument like this, the buyer should remember that it is going to take years before he or she can fully explore the secrets it hides (if at all). The treasure map is full of traps and deceptive paths, but the sonic diversity that awaits is worth the sacrifice and patience 🙂

Dear Readers, please forgive me if I made a mistake somewhere along the way. 60 years ago, most drum manufacturers didn’t care too much about providing all the info regarding wood types or technical specs, and it’s really easy to get your facts wrong based on old catalogs.