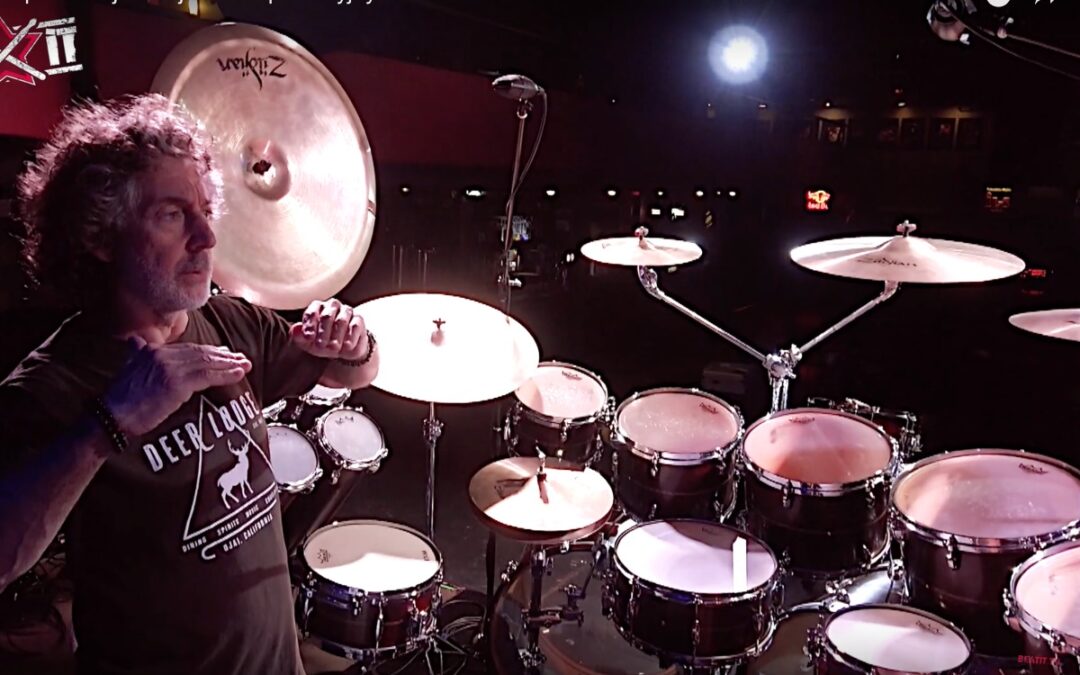 Just before Protocol‘s gig at the Blue Note in Poznań, Poland in October last year, we met up with Simon Philips, who talked to us about his drum set in great detail. The brands referred to in this case are: Tama, Zildjian, Remo oraz Pro-Mark.

“This is a Tama Star maple shell drum kit. Obviously, custom built. I think most of the Star drums are apart from some, maybe, regular size drums. Let’s start with all the drum sizes.

The bass drums are 24” by 15”. One inch shorter than what would normally be a 24” x 16” bass drum. Personally, if I could have 14” depth bass drums, like the old-fashioned sizes, I would. I think they sound better because the front head responds quicker when there’s not too much depth in the bass drum. But there’s a problem and that’s the tom tom holder. If I don’t put that mount way to the front of the bass drum, I end up with the toms in my lap and I can’t play. That’s mainly because, by today’s standards, I use large size tom toms. By yesterday’s standards, they’re normal. It’s just the way fashion has gone and hence why tom tom holders are put closer to you so the small drums are close enough to be playable. But this is a problem for me so I have to have at least a 15” depth bass drum purely so the kit sets up properly. That’s nothing to do with sound. I think the fashion is to have deep bass drums these days. It actually works the other way. It ends up sounding thinner and smaller because that front head doesn’t react so quickly. It doesn’t matter if you don’t use the front head and it would actually be more beneficial but I use a front head so I need that head to respond very quickly to get all the bottom end. So those are the bass drums. 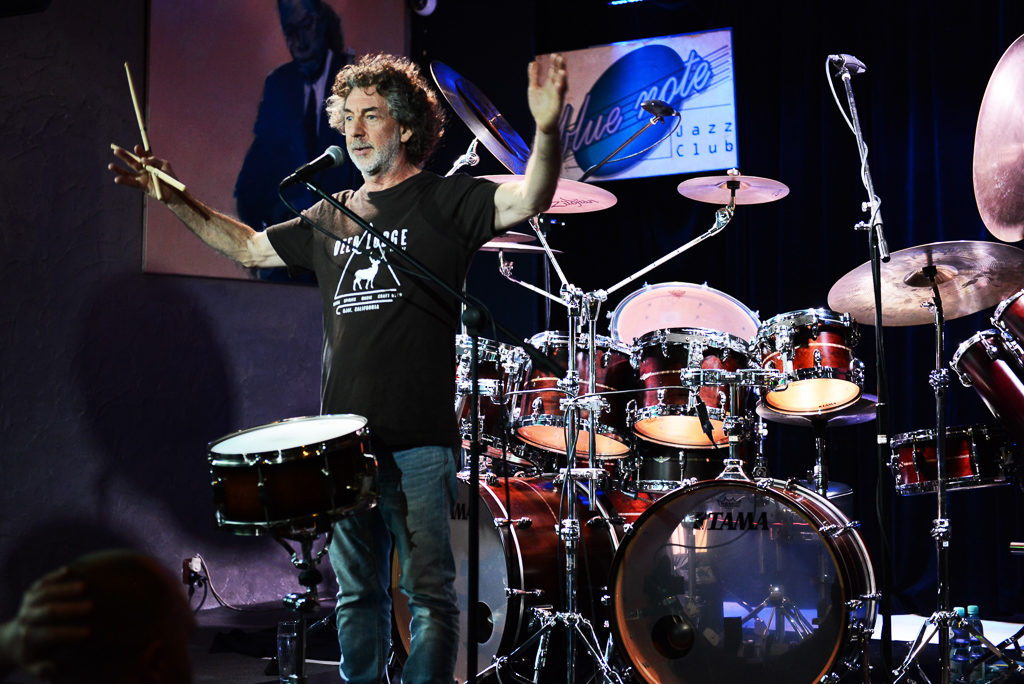 All the heads are Remo Ambassador. As you can see, clear on the toms – top and bottom. Clear on the bass drums – front and back. Clear on the top of the octobans and the snare drums are Ambassador Coated. They work really well with brushes. As I said before, there’s a timpani head on the gong drum. I think that’s all for the drums themselves.

Cymbals. Every set of my cymbals is slightly different only because of circumstance. The cymbals I like to use are the Zildjian Armand series, which, you’ll see here, is written on them. Actually, this may say „Avedis” but it’s actually an Armand. That splash is an Armand. This is an Avedis. I think that is also an Avedis and this is an Armand. You may wonder why the Armand say ’Avedis’. The real Avedis Zildjians have a bigger ’A’ on them. The reason is because the Armand series was discontinued. Much to my dismay. What they do for me, as a special customer, they make me Armands when they can but they have to stamp them… There’s two ways they stamp them. One is… We don’t have it here. Interesting. It’s called Sound something Prototype. I never remember what they’re called [Zildjian Sound Lab Prototype]. Or they’ll just put an Avedis Zildjian stamp on them because it would be very confusing for people if they see Armand and they can’t buy them. That’s the only reason. 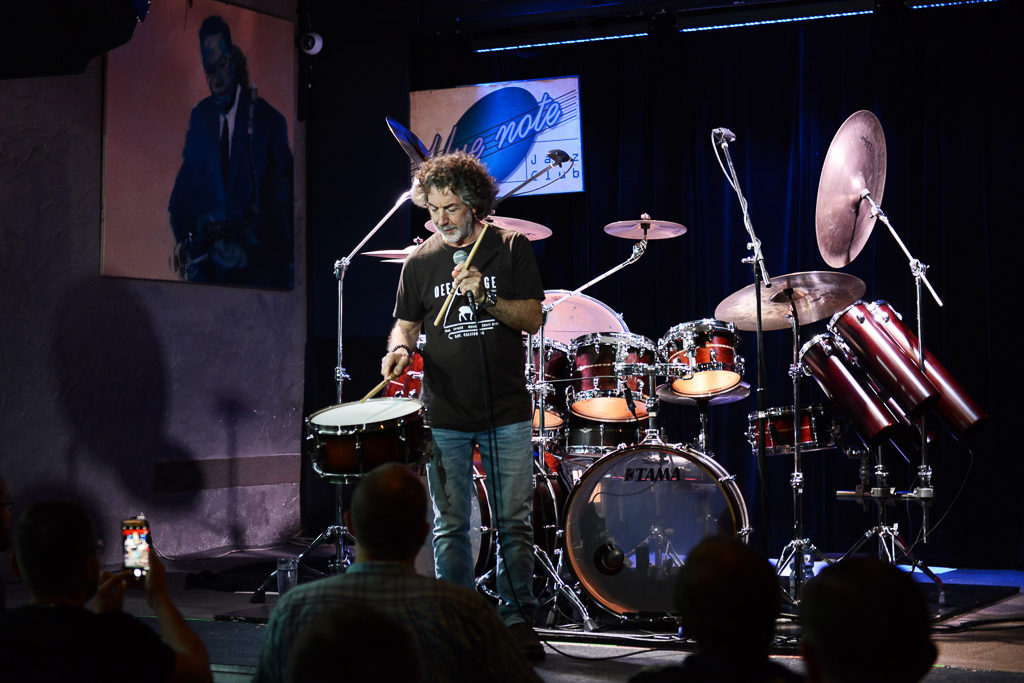 This is a very special cymbal. It was made in 1979. During my first visit to the Zildjian factory, I found two of these. They’re just stunning, beautiful. They’re called Swish Knockers, ’cause they’re 24” sized. They’ve tried to make them like that in recent years and they’re nowhere near the same. These are kind of rather special. The other kinda special cymbal is this one. This is a remake of a cymbal they used to call the Oriental Trash. Now, they’ve discontinued those, too. I happen to have a couple of the original ones, which actually look a little different. They have a different color to them for some reason. They made these specially for me only last year, I think. They’re absolutely beautiful.

Something I like to do. This is a Trashformer. It’s pretty interesting. Sounds like a miniature gong. It makes a real dustbin type sound, which I think is actually very cool for certain things. That’s what I’ve been doing recently.

If you come to see the drum kit in two years’ time, it’ll probably be completely different ’cause I kinda change around stuff. For the moment, that’s what it is.”