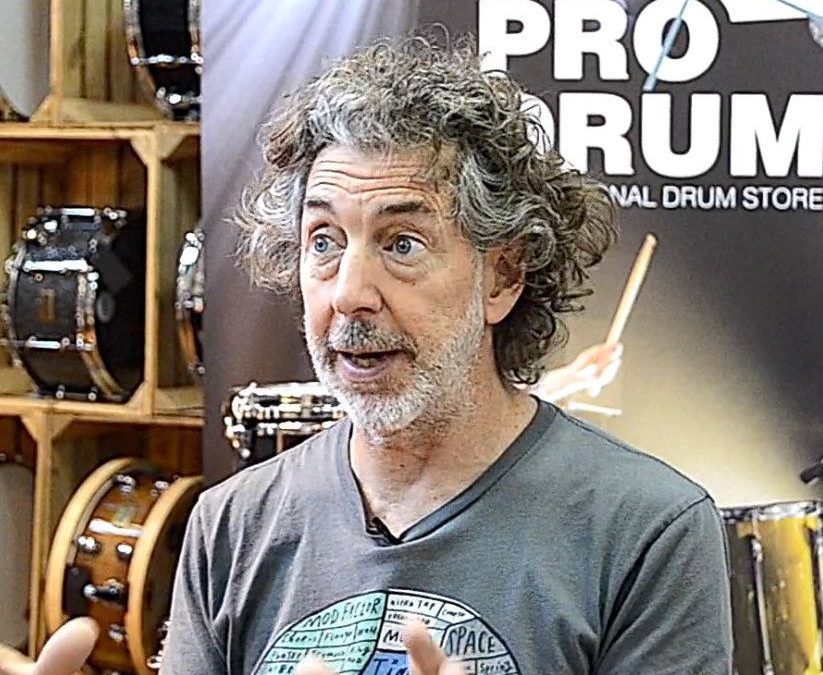 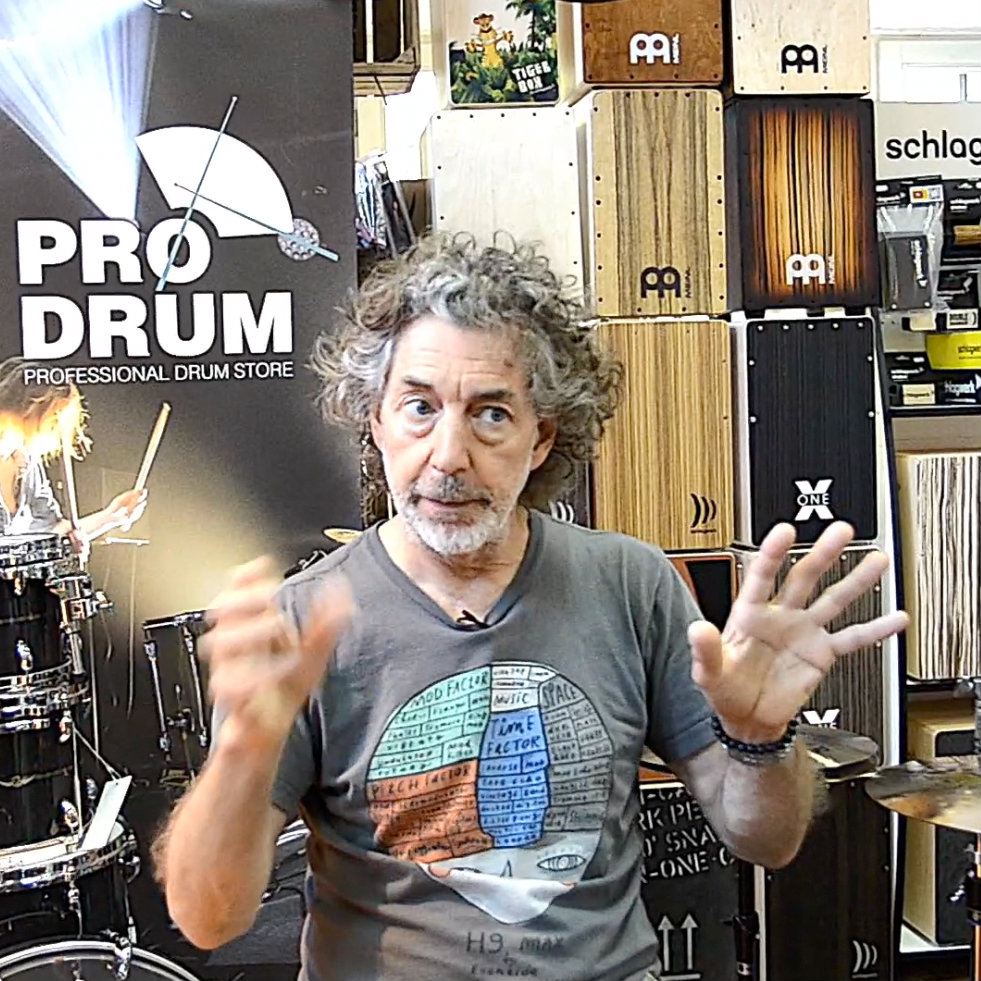 “I started off with a mid-60s Premier kit. It was before they did a complete revamp. If you were to buy a Premier catalogue in 1969, it would have new shape lugs, international 12” and 16” size, with Lokfast stands. It was all really nice. I couldn’t afford that. So I got a used second-hand Premier kit, which was pre-international size, so the 12-inch tom was a little smaller and the 16-inch tom was a little bigger. It was a 16”x20” bass drum with automatic legs with a spring and a 5”x14” snare. All wood drums. I bought that for 70 pounds in 1969. I had to pay my Mom back. In those days, when I did a gig with my dad in 1969, I probably would have got 3 pounds 50. If it was in London, maybe 6.50 – 7 pounds. And I had to pay my Mom rent. She was on my case straight away. She said: ‘You are now earning money, you pay me rent!’. I think it was very good, but a little bit Victorian. My parents were very old-fashioned. From 12 years old, I understood about having to pay your way. I got my first tax return when I was 15 years old. That was rough. ‘What?!’. And my Dad said; ‘The government take money?! Are you kidding me?’. He would put me on his tax return and make the deductions. I’ve been paying tax since I was 15 years old.

Obviously, I was looking at the Premier catalogue all the time. I updated the stands but I was really, really upset when I bought my Remo heads for the toms and they wouldn’t fit. ‘Oh, no! Why won’t they fit?’. That’s when I leaned about different sizes. I went: ‘Oh, dear! I’m gonna have to use Everplay’. I did use Remo on the 12” tom because it sat underneath the hoop. I always wanted a Ludwig drum kit, but they were so expensive. And then, another drum kit called Hayman came out. They were much more affordable ‘cause they were made in England. They had some nice colours. I got the Hayman catalogue, there were all these drummers using them. I said: ‘OK. I’m gonna get a Hayman kit. It’s half price of a Ludwig.’ I think in 1972, I bought a Hayman drum kit. My dad knew the importer, who got me a special deal on it. We got it straight from the wholesaler’s. I bought a bunch of Rogers cymbal stands and a pedal and a hi hat. It was the Fender – CBS Arbiter company back then. I didn’t like the bass drum pedal at all, I didn’t like the hi hat. I’d already got a Ludwig hi hat, which I was loving, so I said: ‘Let’s get a Speed King’. So I took the other one back and then slowly replaced everything with Ludwig stands. In 1973, I got my first Ludwig drum kit. Again, from the same place. I’d already got a deal there so I could get them at a reduced price. I got a Ludwig Big Beat outfit, which was in black: 22”x14”, 16”x16” and 13”x9”. I did all the early sessions on Ludwig. Because the session thing started to grow, I had to get a second kit. We had a guy in London who would drop the kit at the other studio. If you had a session from 10 till 1 and another one on at 2 to 5, you had to have somebody to take the kit there. So I had to get two kits. By this time, I had two racks and one floor. That was also Ludwig, so I had two small Ludwig kits. I had the big Hayman kit for the band that I was in in 1975 but one of the drum kits I’d always dreamed about was the Ludwig Octaplus. My first trip to the States was in 1974 and that’s the kit I got over there but it wasn’t mine. It was the management’s company. When I got back to England in 1975, I started doing a lot of sessions. I saw there was a set of concert toms on sale at one of the stores and I bought them. Ludwig Octaplus concert toms. So I had two white bass drums, mahogany concert toms and maybe the white floor tom. In the studio, it didn’t matter. In 1976, I rang Manny’s in New York and ordered two bass drums and a floor tom to match the kit. Then, by spring ‘76, I had my first Ludwig Octaplus. I used it for every album from ‘76 onwards up until ‘79, which is when I got my Tama deal.

You have to respect the situation that you’re in. If you’re being hired as a drummer, you’re not gonna be the producer or the engineer. These days, and for quite a few years, the engineers have called me, talked to me about what mics I want to use. I say: ‘I can bring my preferred mics if you like’. They say: ‘Oh, that would be great!’. The engineer knows what I do, he’s heard my records, he’s heard the drum sound. Frankly, he wants to get it right and he wants it as easy as possible and as quick as possible. Some people even ask me to mic up. They ask: ‘Do you want to do it?’. I say: ‘Sure! No problem!’. It’s great that an engineer respects my engineering capability, doesn’t have too much of an ego and is quite happy. If he says: ‘I wouldn’t mind changing this’, I say: ‘Go for it! There’s many ways to skin a cat’. The same with the producer. I respect his thing there but, if he asked my opinion, sure! The whole thing is to work together, not against each other. You’re there for the common cause, which is to make a recording as best as you can. That’s what it’s all about. When things don’t go so well, if it doesn’t sound so good, I might say: ‘This is not sounding great. Would you mind if had had a little input? Let’s try to make this work’. That’s usually what happens.

It’s large drum kit. It also sounds different from any other kit, especially recording. If an engineer’s never worked with me before and he starts from the faders up, he gets lost really early ‘cause it doesn’t sound like the normal kit. I’ve had this many times, starting from the 80s. I’ve gone: ‘Let me come and hear it’. I play a little bit and I come in and I go: ‘Sounds great!’. And they go: ‘But...’. I say: ‘Send me the track. Let’s record to the music’. I lay the track down, I come in and they go: ‘Wow! In the music, it sounds different!’. I come from from a slightly different angle from that. You get an engineer who loves it, you get an engineer who can’t deal with it. When Bob Clearmountain was first recording my drum kit, he was doing the same thing. And it was only Jimmy Iovinne that walked in, heard the snare and went: ‘Hey, Simon! Great snare drum sound!’. He had the talk-back down and I could hear Bob go; ‘Really?’. And then the talk-back went off. It was for a Pretenders album. We did the first track and it sounded great. I said to Bob: ‘You’ve mixed this drum kit!’. He said: ‘Really? This? Was it this big?’. I said: ‘Yeah’. You wouldn’t know because in those days drum kit had to go on 8 or 10 tracks. There was no way of knowing how many toms there were ‘cause you’d just have two faders.”

Drummers and Drummerettes! We give you Simon Phillips in the fourth installment of an exclusive interview, especially for the viewers of en.beatit.tv! Enjoy!