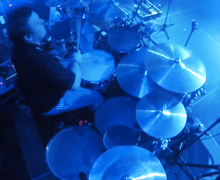 In this part of the interview, Robert Ligiewicz of the legendary band Hey tells BeatIt all about his glamorous career as a young drummer in a communist country and double bass drum playing until he got… conscripted (mandatory military service in Poland lasted for 2 years at the time). We also find out who Robert played with right after he had been discharged, how he became a member of Dum Dum (his pre-Hey outfit), what the first piece of equipment he purchased at the time was, and who his drumming fascinations included. Towards the end of this episode, Uncle Robert and a deeply moved Editor-In-Chief reminisce about the caveman 1980’s/1990’s equivalent of YouTube drumming lessons. Drummers and Drummerettes, we give you Robert Ligiewicz!