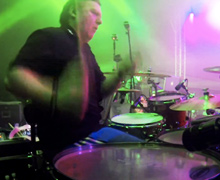 April 12 2013 was the day when the Polish rock legend Hey appeared at Hall 2 of the Poznań International Fairgrounds. Over the last 20 odd years, Robert Ligiewicz has invariably been the man on the drum stool in that band. Naturally, BeatIt had to jump at the opportunity to ask someone like that a few questions. All the more reason, we are talking about an open, talkative and easygoing person.

The topics covered at the begining of our meeting with Robert included the earliest stage of his drumming adventure, his initial fascination with the instrument, his first band, first concert (both as a listener and a performer), first drum kit, as well as our guest’s debut in metal processing. Here is Robert Ligiewicz in the first part of what we think is an interesting conversation. Enjoy!