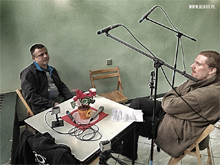 In this part of our conversation, Paweł Herbasch talks to us about what it is like for him to work in the studio, which recording mode his band Illusion have chosen, how he gets in the right mood before going on stage, what he thinks about pad excercises (is it contageous?) and whether he is ever satisfied with his drum parts once a recording session is over. Our guest also answers the old question asked by many young drummers’ as to whether it’s better to go to a party or practise in your rehearsal room a bit. Also see which moments in his career Paweł Herbasch considers to be the best ones and if he is able to rap. Have a good watch!