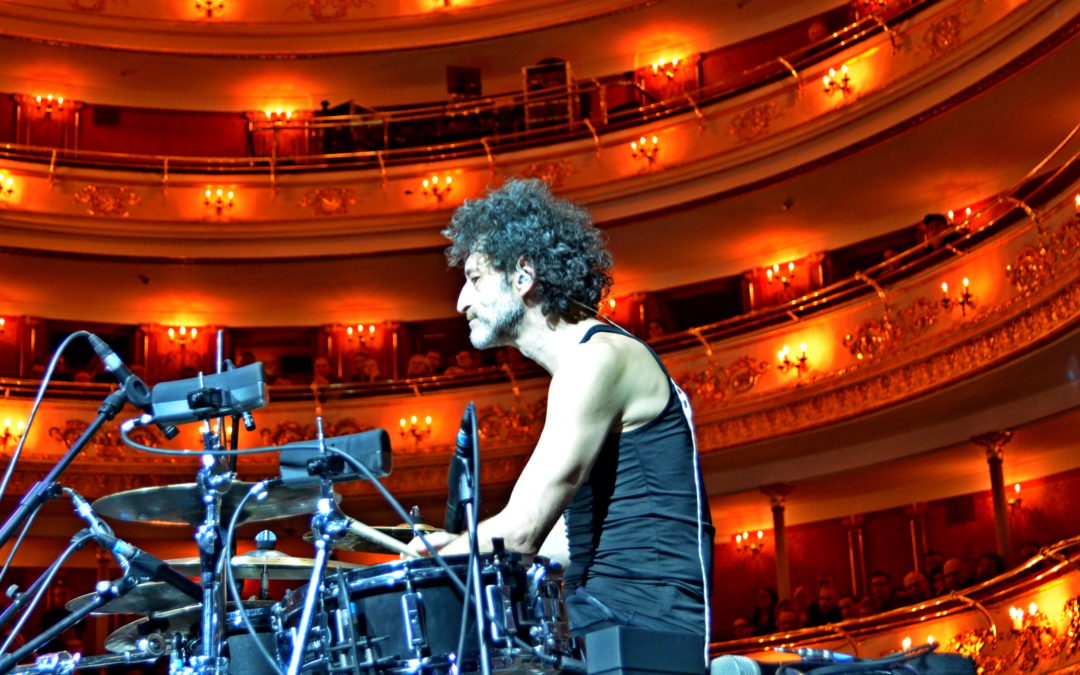 On October 9, 2017, we had the opportunity to interview one of the most prominent drummers of today – Jojo Mayer, who came to Poland to perform at the Eklektik Session festival, which took place at the Wrocław Opera House. Despite his cold and a busy schedule that day, the Artist found time to talk to us about… Well, it’s not going to be the usual drum talk kind of conversation BeatIt viewers are accustomed to. It’s a conversation about the history of drums and the drum kit, the current situation of the music industry, as well as the future of the favourite instrument of all of us drummers. 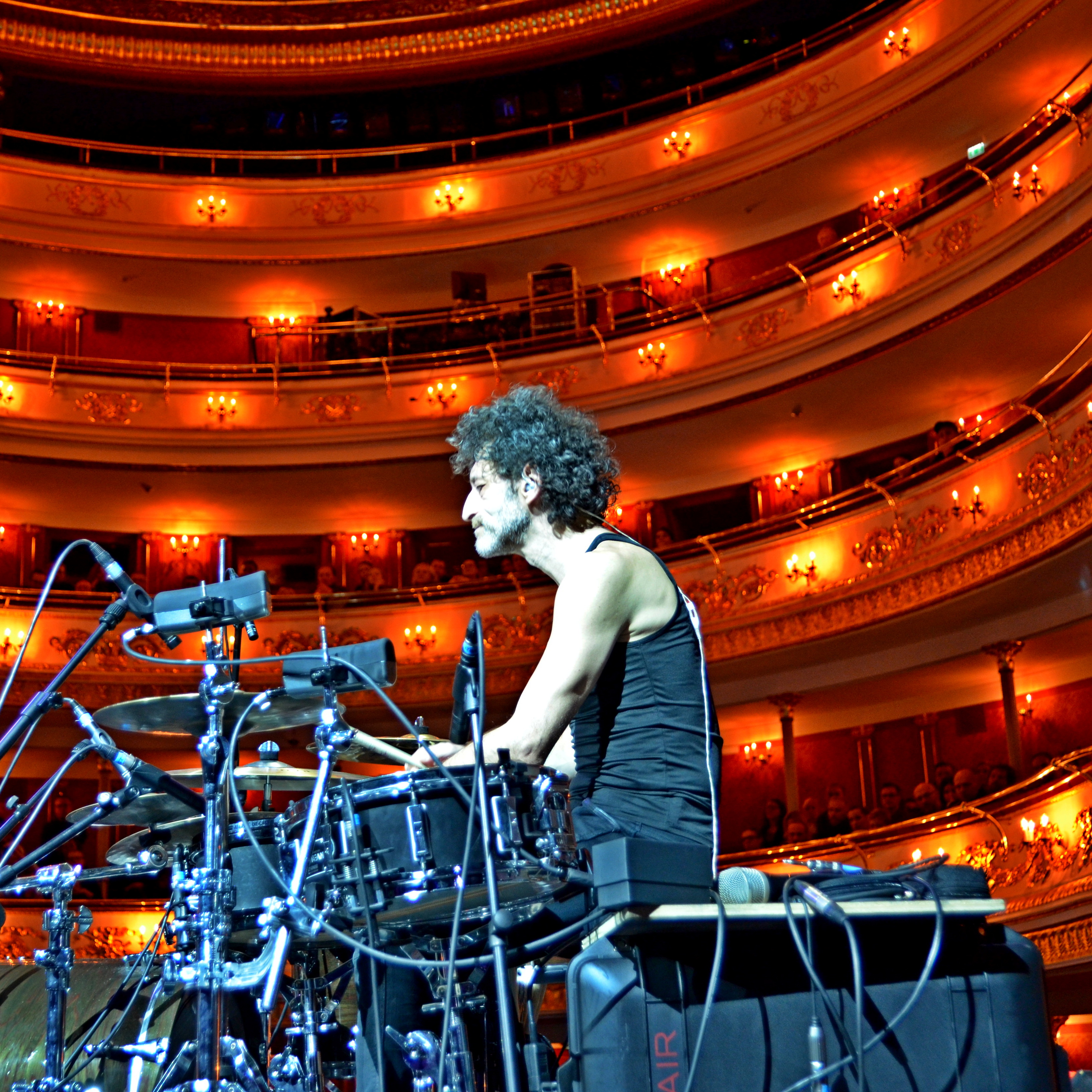 “I’ve been collaborating with Bond, the promoter of the Eklektik Session festival, for a long time. It’s been about 10 years now. Producer Roli Mosimann, who I worked with many, many years in New York, has been living here for a couple of years. Since Bond is organizing the festival, he invited us to come and play a show with my band Nerve and do a collaboration with some other artists. We’ll see how it’s gonna play out. It’s a great occasion, we’re playing at the Opera House and the audience is actually on stage with us, which is nice. This is a reversed situation – the band is in the audience and the audience is going to be standing on stage. The rehearsal today was more trying to calibrate and navigate with the sound and stuff like that. We didn’t really work on a musical context. We’ll see what’s gonna happen. It’s very improvisational and a lot of surprises, I guess. This is actually the last gig of this short tour with Nerve. We played Europe earlier. We’re going back to New York because we’re working on another record right now. Also, I made a movie with Charlie Duke – the astronaut from Apollo 17. It’s gonna premiere next week. The band is also involved with that project to a certain degree so we’re gonna play some shows in New York. Then, in December, we are going to tour in Asia.

I’m not really doing a lot of clinics these days. There’s so much happening right now. I do movie soundtracks. I’m working on another movie about architecture this winter. I will do a solo performance and a lecture at the Wired UK event in London, on November 2 or 3. That’s a speech and a demonstration of concepts that appear in the face of the robotization that our society is facing. It’s something that every drummer, including me, faced about 25 – 30 years ago when drum machines came. To find a way to deal with the imminent replacement by a machine is in the core of my philosophy. We have to negotiate what it means or how legitimate it is to be a human performer and how long this is going to be valid before we are replaced by a machine.

Whether it’s inevitable depends on what you do. I think taxi drivers or people working in banks are going to be replaced. Same with drummers. It really depends on what it is that you do with the drums. The drum is a communication instrument. If you communicate something… It’s just an instrument and it depends on what you do with it. The drums always changed over the course of the last one hundred years. The drum is very, very old. It’s like the wheel and speech, but the drum set is a very particular instrument that kinda came with the economic and cultural changes in America. First, we didn’t have a drum set, but a snare drum player, a cymbal player and a bass drum player in dance bands. Then, with vaudeville, it was consolidated to a single person that played all those different instruments. That was kinda like the beginning of the drum set and then William F. Ludwig mass produced the first bass drum pedal, which was the birth of the drum set. Vaudeville fell into a crisis because of Hollywood and silent movies. Drummers were out of their jobs. Then, drummers found new jobs not playing in orchestral pits but making sounds for silent movies. The drum set started to grow. Wood blocks would imitate the sound of horse hoofs, there were gongs and other things. All that became part of a drummer’s arsenal. Once movies started to have sound, with the innovation of sound recording, that job became obsolete. But then, with sound recording and the radio, came the birth of jazz. The whole creativity reincarnated in this art form. The drum kit is a very modern instrument, so we’re at the cross roads now, as we’re entering the technological age. Now, we have electronic drums simulate the sound of an acoustic drum set, which is kinda stupid. It’s a limitation ‘cause there’s much more that we could do. Where it’s going to go doesn’t have to do with technological limitations but with the limitations of our imagination and where we want to take it. We will see where it’s gonna go.

A lot of things are going to change but some will not. One of them is our need to communicate. As I’m saying, the drum is a communication instrument. If we use it to communicate something important and share the good and bad things about life, the funny things, the irony, the political, the beautiful, the ugly… As long as we share and make it interesting, someone will want to listen to us because one of the main reasons for music to exist is because it makes people feel less lonely. It unites people. If we are able to do that with drumming, I think we build something cultural. If we’re going the athletic avenue of being the fastest or having the most vocabulary, I think the drum set will die very soon. I don’t think anyone will be interested in anymore. I’m mean, what’s happening right now is a big crisis. Theres no more bands, people don’t know how to communicate so they play Slipknot covers on YouTube. That’s because they don’t have the confidence to create something new. We live in a cultural climate of extreme cultural insecurity. They need to be reassured by how many likes they have. They feel they don’t have a sense of self-value. This is what music is about: you have to take a stand. That’s what rock and roll was about: ‘Oh, I don’t like this and I want to change it’. That’s what rock and roll is. We need a little bit of this.

You have to change things now. I think the music industry is finished. What we’re experiencing right now is an echo of the 20th century. We don’t really have a music business. We have some weird thing, you know. Real art is not happening there. We don’t have people in mainstream culture that are like David Bowie, Pink Floyd or Frank Zappa. There are some people, like James Blake, but the mainstream is not like this anymore. It’s really plastic right now. So we need something like rock and roll again. I think a true artist never adapts to the world, a true artist changes the world. We need people with confidence, wherever they are. They don’t have to be in New York. They can be in Cracow, Dusseldorf or a small town. They should find people to build communities and find solutions. I think playing the drums is a good way to do it. Maybe it’s going to be different to what we did in the last century, but to hit something and create a reaction still works.”

Drummers and Drummerettes! Here Jojo Mayer in an exclusive interview for en.beatit.tv!