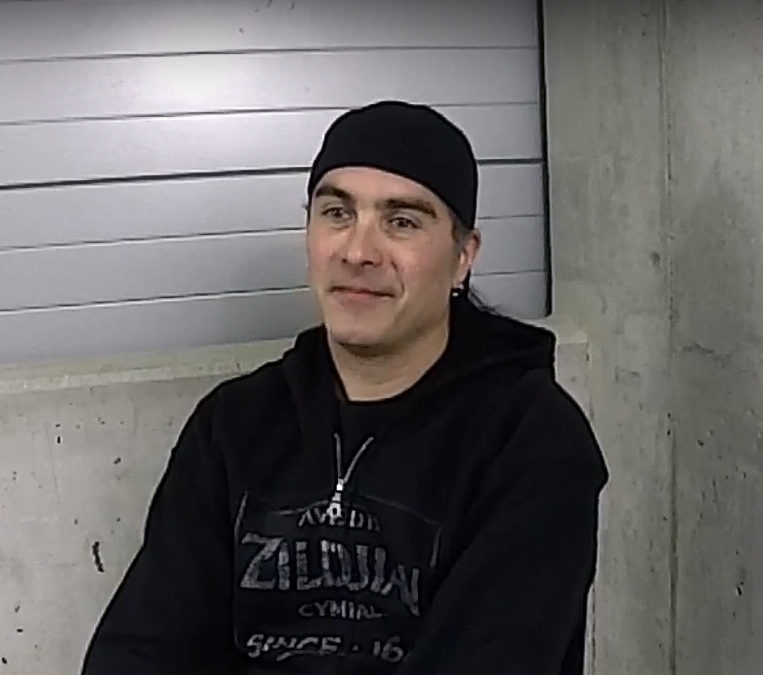 In the first part of the interview, our guest sums up Flotsam & Jetsam‘s European tour in the fall of last year. He also discusses how he stays fit on the road, the stress connected with doing drum clinics, as well as his personal way of doing warm-up before a show. 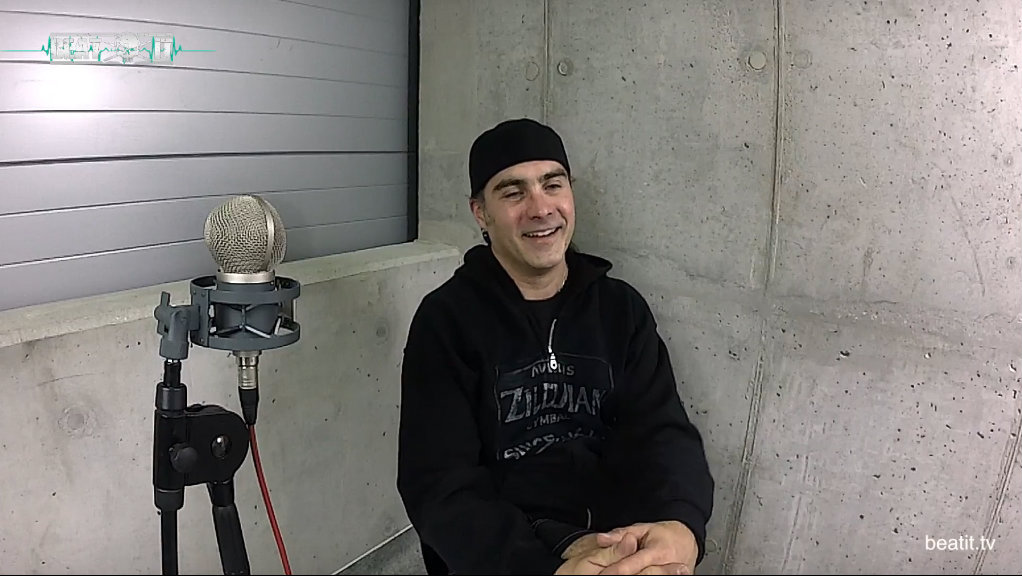 Jason Bittner: Thanks for having me.

B: Thanks for your time. We are catching up with you at Drum Fest 2016 in Opole, Poland. You’ve got two gigs at this event. First, you’re playing with Flotsam & Jetsam and that’s tonight and then tomorrow there’s a clinic. Is Flotsam & Jetsam on tour right now, as we speak?

J. B.: As of this evening, this is the culmination of six weeks in Europe. This is the last show of a little over five and a half weeks in Europe. We’ve been gone for six in total. We just did 29 shows with Destruction across Europe and that tour ended last Monday or last Sunday rather and then Monday we flew to Greece, did a few shows there and now we’re here.

B: So you can actually sum up the tour. What are your impressions?

J. B.: It was a great tour. We had a blast with Destruction. They’re our brothers from Germany now. We were friends with them before but after touring with them it’s one, big, happy family now. There was a lot of ups and downs. We encountered a lot of things that were not so savoury on the way, including a really, really bad night in Belgium in the rest area with some unsavoury people. But we made it through, thankfully, and we live to tell the tale. As I said, it was with a lot of ups and downs. We started with bus problems from the begining. We were all supposed to be on one bus. There was four bands in total and all 24 of us were supposed to be on one bus. That bus was never completed so we started with two buses for pretty much 75% of the tour. And then, all of the sudden, this one bus shows up and we’re supposed to cram into that one bus. We knew from the get-go that it was probably a bad idea. Five days later, it broke down, it died, it blew up, it caught on fire. I was pulled out of my bunk to get off the bus. Needless to say, our gut feeling was to stay on the other two buses, which we should have done, you know. But the tour was great. We played all over Europe, some of the crowds were amazing. There was a few light ones here and there but for the most part it was a great tour. It ended in Mannheim, Germany, last week. Then, we went down to Greece. We played in Thessaloniki and Athens. Now we’re here.

B: Is this the final show?

B: Anything special for tonight as it’s going to be the last European show?

J. B.: Yeah. We’re gonna stay awake and not pass out before the show is over. We’re conserving every single bit of what little energy we have left. Literally, we didn’t get to a hotel from the Athens show last night until 1 o’clock in the morning. We were up in the lobby at 5.30 to fly here. 5-hour van ride so we’re all pretty exhausted. But for us, it’s one more night. Let’s go out, let’s do our 80 minutes and give the last little blood, sweat and tears we have ‘cause we know that tomorrow we can start resting. Well, at least, they can.

B: Since it is quite a tiresome thing, more travelling than playing, actually, what do you do to stay in shape and be at your best on stage?

J. B.: For me, it’s about trying to stay as healthy as possible. I try to eat as well as I can. It’s a lot diferent when you’re on the road. You don’t have all the comforts of home and whatnot. I stopped drinking alcohol four years ago becausee I got sick with pancreatitis back in 2012 and it’s a nasty disease. It’s a nasty situation that I didn’t want ever to come back again so the doctors suggested I stop drinking, so I did. That really helped me a lot on tour because, without fighting the hangover, even having acouple of beers after the show, you’re still knocking your immune system down for the next day. Just getting that out of my life has helped my show a lot, has helped my stamina on tour. A lot of vitamins, health foods, working out, yoga. I started this tour really good, like, I was doing my workout for probably the first two weeks of the tour and I just got sidetracked and started reserving my energy just for the show. Once you start playing when you don’t have any days off, it’s a lot, too. You get one day off every 13 days and the last thing you wanna do is go to the gym. You just wanna sleep all day. That’s why I look forward to my time at home to get back in the gym, get my stuff together again.

B: So these days, the rock’n’roll is on stage, not off stage.

J. B.: Absolutely! We’re pretty pathetic at this point. When we’re off the stage, within 45 minutes most of us are in our bunks trying to go to sleep. We’ve been doing this for so long… Like, the younger bands are downstairs in the lounge, partying. Yeah, been there, done that 20 years ago. I’m going to bed. We don’t have the energy for that anymore.

B: What about a warm-up routine before a show? Do you do that?

J. B.: Yeah. That’s one thing I stick by. I stretch for about 20 minutes or so, you know, get my hands stretched, my legs, my feet, my ankles. And I do 20 minutes on the pad. I usually give myself half an hour from the changeover time of the band before me to get my pad out and get things together. The only time I don’t warm up is if you happen to have one of those nights when there’s nowhere to do it or for an unforeseen circumstance. For instance, the last night of the tour. It was in Mannheim and our bus decided to die the night before and we weren’t even sure we were gonna make the show. We made the show an hour after the doors opened. Literally, bus pulling up with the trailer. So we did everything we could just to get the show happening. It was a night like that where there wasn’t even thought of a warmup. It was just what time my stage goes on, run over to get the show over with ‘cause we only got, like, half an hour to play ‘cause they were cutting the sets. Let’s just get it done.

B: The stress will warm you up itself.

J. B.: Yeah! Once you have that adrenaline going you don’t think about the warm-up. Plus, when you’re on a tour, the only time I might not warm up is towards the end of a tour. If I’ve been on the road for three and a half weeks, I’m pretty much usually ready to go. But I still like to sit down at the pad for 20 minutes and do something. I feel better mentally if I do that.

B: How differently do you approach preparing for a clinic? I mean a warm-up.

J. B.: Same thing. There’s still warm-up but there is no difference from a clinic, from a show, the way I warm up. It’s just: ‘What am I playing in the clinic?’. My mental state might be somewhere different but as far as my physical state I’m still doing the same kind of warm-up. I’m probably more nervous for the clinic than I am for the shows. I don’t think about band shows, to be honest with you, ‘cause I’ve been doing it for so long. When you’re out there withe band, you’re with the band. When you’re in the clinic environment, you’re by yourself. If you make a mistake, there’s nobody to blame it on. ‘Oh, the bass player made a mistake!’. No, dude, there’s no bass player on stage! So there’s just a little bit more of pressure, I think. Because I wanna perform to the most of my abilities and I might pull songs out of a hat that I haven’t played in a while. So it’s that kind of going-for-it thing: ‘Hope I don’t mess this up. I haven’t played this song in a while’. ‘Oops!’.

B: So it’s more like being in a studio, only there’s no do-over.

J. B.: Exactly! Unless you wanna go; ‘Alright, I messed that up. I’m gonna try it one more time’. I’ve done that. There were times where I’d start a song and pick a different song that wasn’t at a level, soudwise, as the last one. And I’m 10 seconds into it and I can’t hear anything. Instead of trying to suffer my way through it, I’ll stop, fix the levels and try again. I learned the hard way. When I first started doing clinics, I would do that. I would just try to, like, fight through it and keep going. Then, I got to a point I’m like: ‘Why am I killing myself like this?’. Just stop and explain to the crowd I can’t hear what’s going on, fix the level.

B: That’s part of a clinic, actually.

J. B.: Exactly! It shows that I’m a human being and not a robot.

Drummers and Drummerettes! Exclusively for you! Jason Bittner in the first part of an interview for beatit.tv!