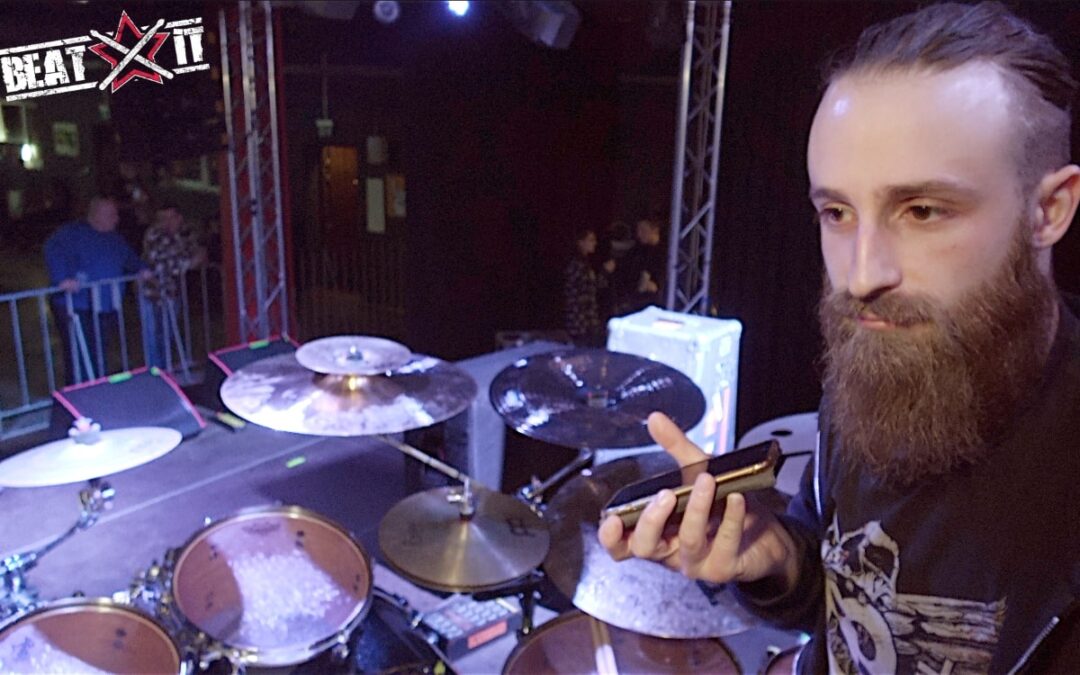 Back in the old days, when hanging out with people was still legal, we went down to the U Bazyla club in Poznań, Poland, to see the Polish legends of Death Metal, Vader. As fans of the genre all over the world know, the man behind the drums for the band is England’s very own James Stewart, who is a true expert in extreme metal drumming. Here is what he told us about his drum kit… 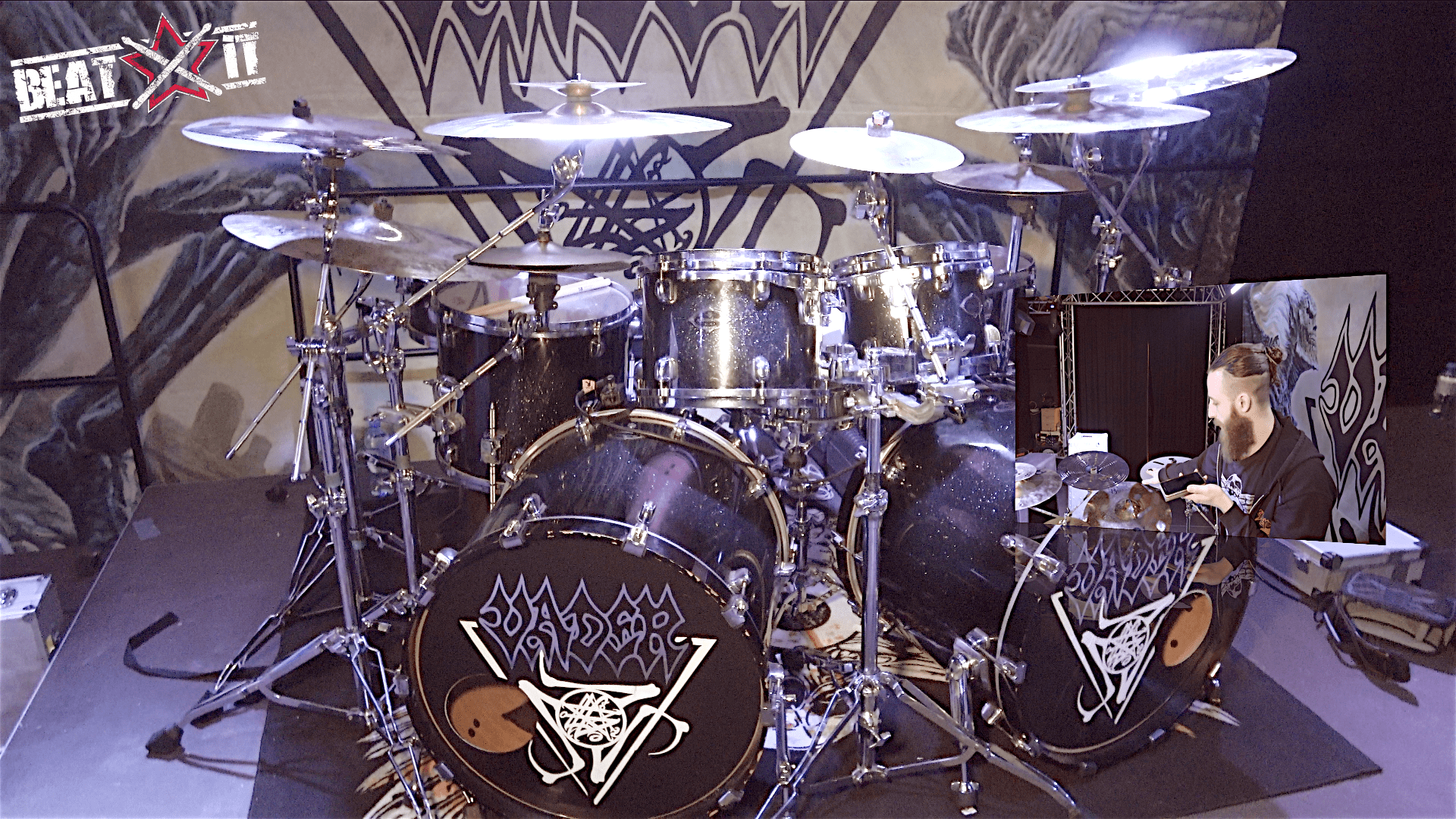 “Hi everybody at BeatIt!

It’s the same drum set as it was last time I was featured on BeatIt five years ago. The only thing that’s really new is the 14” x 6” Tama Starphonic Brass snare. It’s a little bit more even-tempered than the S.L.P. Black Brass, which we kind of felt was a little bit too loud and wasn’t really working in every room. This one’s much more balanced so it’s working out really nicely. It’s still got that aggressive sound that you want from a metal band. It works great.

The cymbals have slightly changed over. Now, where there was a 16”, there’s now a 20” china. The crashes are still 16” and 18” in the front here but they’re now Meinl Byzance Brilliant instead of Byzance Traditional, which I had back then. That’s a Byzance Dark 8” splash. It used to be something else but also 8” Byzance. That’s still a Brilliant splash. It’s the same that I’ve always had since the beginning. You can tell. It’s the Mb20. The ride’s got a little bigger, so it’s a 22” Byzance Heavy Hammered. I was a little bit worried that it would be too loud but actually it’s very balanced and it’s working really well. Meinl Classics Custom Dark as the main right-hand china. I don’t remember what I had before. I’ve been using this for a long time now because it’s really durable and it just works. It almost never breaks and it still sounds OK. They are reasonably inexpensive, so that’s always a good thing. Generally, this whole range is what I use on smaller shows and in my practice room ‘cause they’re rather cheap and they still sound killer. It’s a good hack for drummers looking for good, cheap cymbals. This is the same 18” Byzance Vintage Crash. It’s kind of similar sounding to the china but not as loud so it gives a nice balance between the two. Something trashy but not overpowering. It’s a bit washy, which is great for riding on the crash to get something that’s present but not killing the mix.

I’m still using the Iron Cobras. They’re not the same as the last time. They’ve been changed over a few times. The only thing that’s really changed with the Iron Cobras is that I use the heavier springs, which I still break constantly. 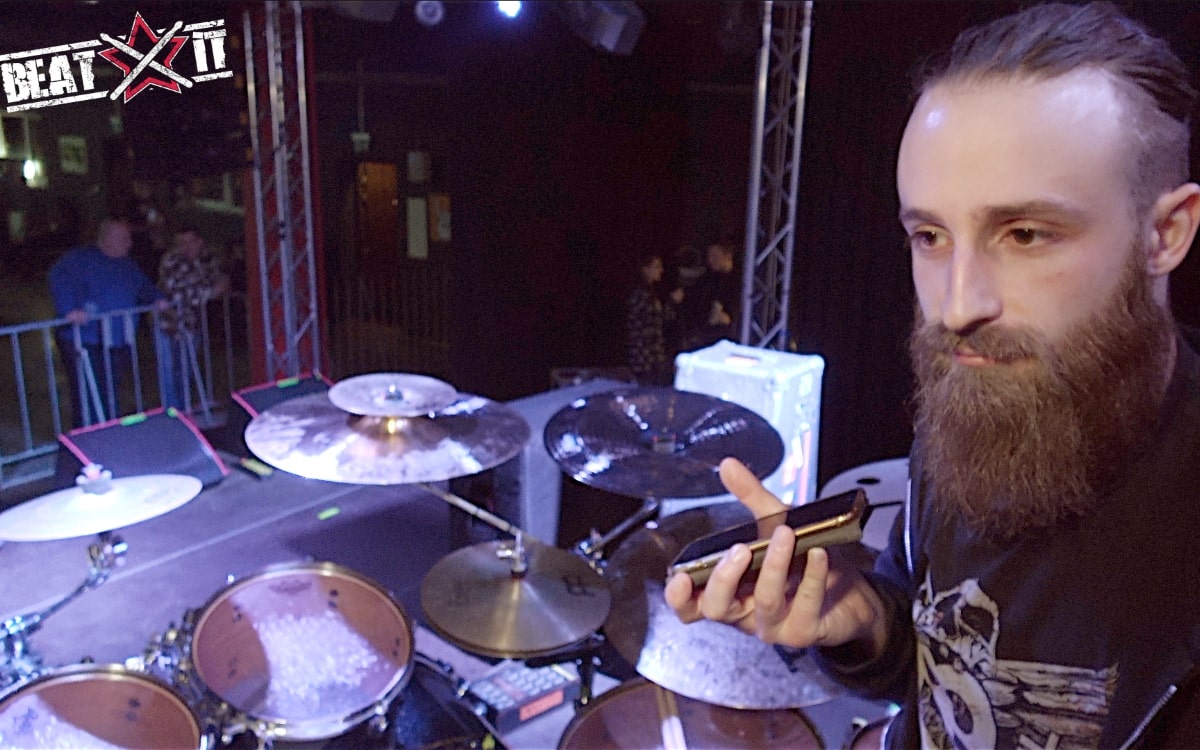 We always use Remo Emperor skins. Sometimes coated but I prefer clear for live shows ‘cause the coating wears quite quickly and you have to replace them regularly. So clear Emperors on top and clear Diplomats on bottom. Something slightly thinner. Sounds killer, doesn’t need too much tuning, lots of tone, medium sustain. I’m not one of those drummers that like everything too dead. It needs to project and have a tone and sound. Normally, it’s Ambassador on the snare, like today. If it’s a longer tour or if I’m going to places where Remo aren’t necessarily available, then I’ll take the new Powerstroke 77 – the triple-ply one. It behaves reasonably similar but it’s very, very durable. It’s a fantastically useful head. It’s Powerstroke 3 on the kicks and, normally, P3 Resonance. Today, it’s clear Ambassadors with the Vader stickers on.

That basically behaves like a P3 anyway ‘cause it’s a little bit thicker. The sticks are Vincent 5B – very, very standard. I like to use as much standard equipment as possible because I can find it all over the world and it’s not a problem.

As for dampening the kick drums, there’s virtually none. Just one Evans pillow in each one and that’s it so they’re very, very loud.

The throne is Tama 1st Chair. Just classic round top, nothing fancy. It’s very solid, which I like. It’s good for the back. I don’t like the drum seats where you sink when you sit down.

Electronics wise, we’ve the Roland TM-2 – the classic, which is down there. We have a really cool gadget for running the backing tracks and the click tracks, which is the Cymatic Audio. You can see, there’s 16 outputs, of which we’re only using three. It’s a very useful piece of equipment. It runs all off USB, it’s super intuitive, super easy to use and actually quite cheap – about 300 Euro. Even bands like Behemoth are running on this now. It’s a solid and dependable piece of equipment.”