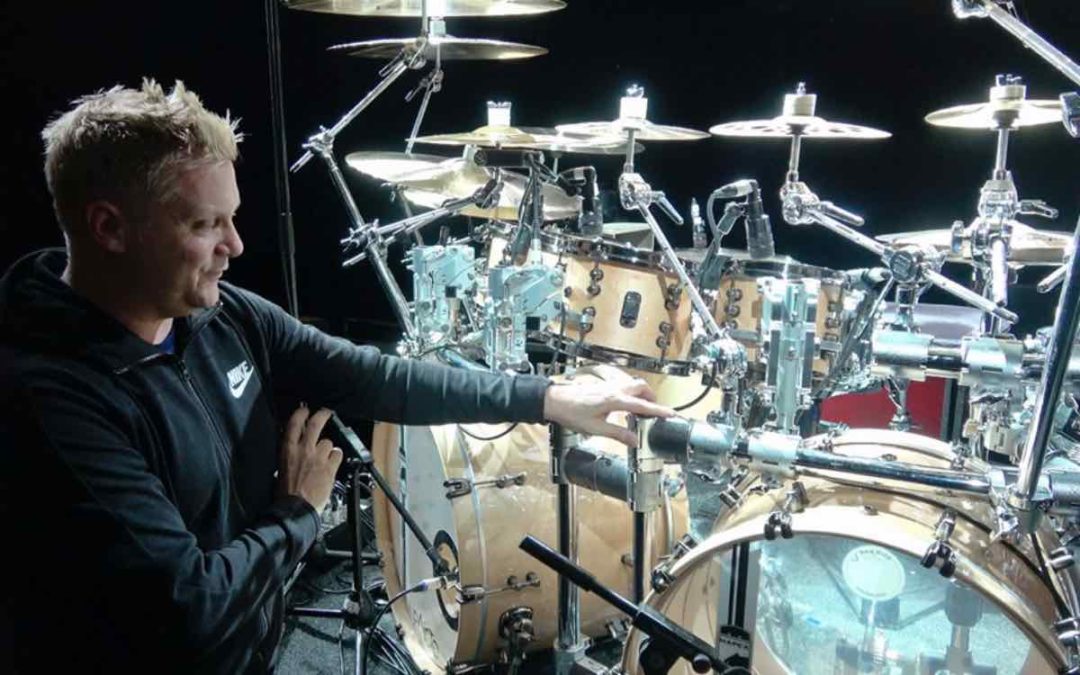 The 6th and 7th of May were very special to all the 70s Genesis fans in Poland. It was then that guitarist Steve Hackett, who was a member of the band during that period, did two live performances in our country – in Poznań and Kraków. Of course, he has also recorded lots of wonderful music as a solo artist, but the shows were part of his most recent Genesis Revisited Tour.

The drummer on the tour is Craig Blundell, who had already been to Poland playing with Steven Wilson and doing a clinic during the third edition of the Integration & Groove drum workshop. We arranged to meet Craig on the 6th of May in Poznań so we could interrogate him about his new Mapex Versatus kit (with Paiste cymbals and Aquarian drumheads), which was designed especially for this tour. 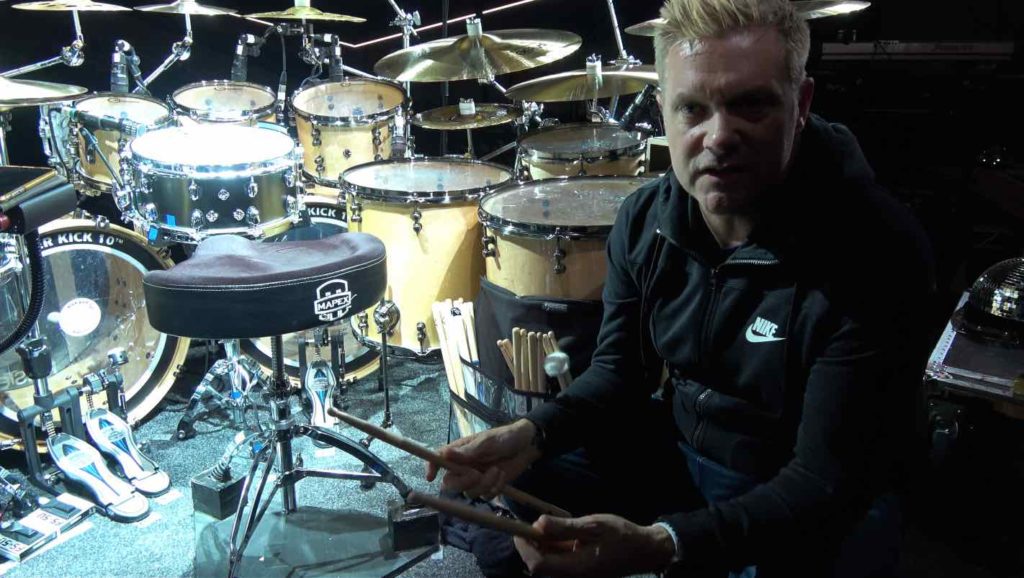 “Hi! I’m Craig Blundell and I’m delighted beatit.tv have come along and asked me to do a rig walkthrough for you. I’m currently on the Steve Hackett ’Genesis Revisited’ tour. I came straight off the Steven Wilson tour for 18 months. We needed a new rig, different sounds, different tones and this was basically sketched in a hotel room in Norway last year when I first got the gig. We decided that I can’t use the Steven Wilson rig. This was devised on two pieces of paper, I sent it over to Mapex and four months later it’s here on stage and it’s a thing of beauty.”

“When Steve Hackett contacted me I was gonna go two up, two down, one kick. And then, he started sending me the material that he wanted to cover. He’s doing ’Selling England By the Pound’ – an amazing Genesis album that Phil Collins was absolutely on fire on. And then, ’Spectral Mornings’ with John Shearer on drums. They had this really massive power tom sound. And there’s Steve’s new album, where he’s had Gulli Briem, Simon Phillips, Nick D’Virgilio as well as Gary O’Toole. I’m having to cover the material how Steve likes it and how the album should sound as in tonally.”

“We’ve had to cover a lot of old things. I spoke to Paiste about trying to recreate Phil’s old cymbals. We’ve gone for 2002 Big Beats and I’ve gone for 602 Modern Essentials – quite thin, but I was trying to sound like the record. I use four crashes on the gig, starting with a 21” 2002 Big Beat, a 20” 602 Modern Essentials, a 22” 602 Modern Essentials, and a 24” Big Beat, which is just a beautiful cymbal. I came off the last tour using 2002s, which are a little bit more aggressive, so I decided to pull it back a little bit and go for something less bity and something a little bit more warm. I’m using a 24” 602 Modern Essentials ride. Never used a 24’ ride before. It doesn’t feel like a 24”. It has all the body and the soul, but the attack of a smaller cymbal and a rich tone of a big cymbal. The other ride a 20” 602 Medium Flat Ride. It’a absolutely beautiful! I never thought I’d use one, but they sound fantastic. Then, I’ve got all the bells and whistles for the ’Epping Forest’ track, where there’s loads of little bells and sprinkles. I’ve got two accent cup chimes, a mega bell, which doubles up as a hat, which is cool. An 8” Modern Essentials Splash, a 10” Modern Essentials Splash, a PSTX 10 with a Flanger Stack. I was really torn with hi hats. I was trying to find something really warm, dark, but with attack. It is quite difficult and you don’t know until you’re on the gig or at rehearsals. We went for the 14” Modern Essentials and it’s absolutely THE perfect sound for me. It really is perfect for the gig. Not too overpowering, it sits in the mix but you can make it pop out when you need to.”

“Same with the drums as well. I’m using two kicks. It’s back to the Chester Thompson days. He’s one of my heroes and an amazing drummer. Two kicks is a new thing for me since I was like 14 so that’s pretty interesting. Toms wise, this is a Mapex Versatus. I was pretty heavily involved with this kit from the very beginning. They only have ten artists worldwide and I’m the only British guy, which is really exciting. I’ve gone for 8”, 10”, 12”, 13”, 16”, 18” with an 18” auxiliary drum as a gong and two 22” kicks. Having that kick setup’s taken a bit of getting used to but I’m pretty much there now.”

“Head wise, I’m using Aquarian Force 10s on top and Classic Clears on the bottom. I’ve been with Aquarian forever so head wise it’s been an easy choice for me. They last forever so my tech’s happy as well.”

“I’m using a Roland SPD-SX, so it’s got all sorts of clicks, bells and whistles, mark tree effects in ’Cinema Show’.”

“I’ve got two single Mapex Falcon pedals, a single Falcon hi hat and two BOSS FS-5U pedals – the left side for the click, the right side is for all sounds off.”

“My signature stick with Vater was 7A and that’s what I did the first leg of the Steven Wilson tour with. Then, I found myself playing a bit harder and breaking more sticks, which is not a boast. Nobody wants to break stuff. So I went to 5A, 5B, and now I ended up on the last tour with the fat back 3A.”

“Snares wise I’m using a Mapex Wraith. It has the bark and the bite all you want but it’s controllable. It’s not one of those metal snares that’s gonna take your face off. For the last Steven Wilson tour they made me a 12” x 5” custom Saturn V Tour, but they made a one-ff snare drum for me. It sounds amazing, a real popper. It’s really, really nice. And I’ve got a Hi-Energy head on that one, Super Kicks on the kick…”

“As you grow, your sound grows with you as well. That’s the thing that I’ve noticed. People like Gavin Harrison or Gary Husband have their own sound but it’s evolved over the years. They’re amazing players as well.”

“The whole thing’s mounted on four Roland TD50 racks. I thought: ’I’m gonna buy an extra bar for the hat’. The hat is rock-solid now. I’ve got an auxiliary bar for all the splashes otherwise we’d get less space. It took about three days to design. It’s all mounted on four central pillars.”

“I think that’s pretty much the overview of the kit. We’re out till next June so it’s a long tour. I think 14 months in total with rehearsals. And then, on to the next one, which will be back on an old rig or…who knows? A month in and it has already been a privilege to play this kit. Thank you guys. I hope you enjoyed it and you can find more information on my Facebook, via this website and hopefully I’d like to see you at the show. Take care!”