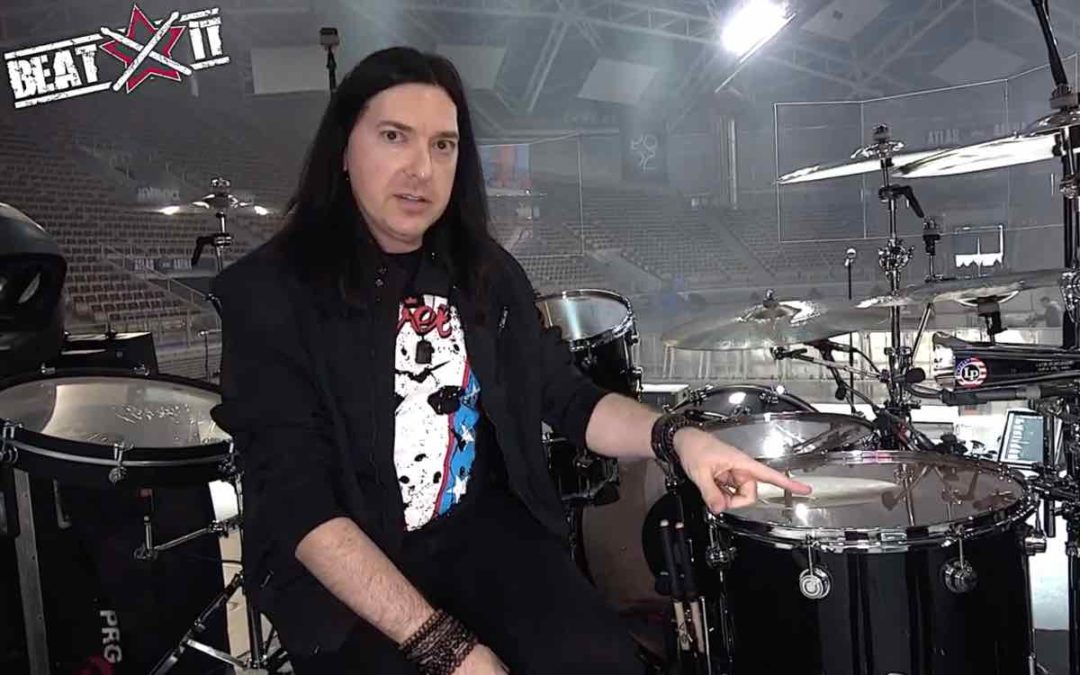 The 12th of February 2019 was a rather cold and grey day in Poland (it was the middle of winter) but we were confident Atlas Arena located in the city of Łódź was going to get pretty hot and colourful once Slash – the legendary guitarist from just as legendary Guns N’ Roses – got on stage. Since it was Slash solo, he was obviously accompanied by singer Myles Kennedy and a group of instrumentalists known as The Conspirators, which drummer Brent Fitz is a member of. Hooking up with this likeable musician didn’t cause us any problems, so we jumped in the car to prepare a rig rundown (HERE) and an interview with him. It’s always good to know what’s up with a sticksman who has collaborated with the likes of Alice Cooper, Vince Neil, Theory of a Deadman, Bruce Kulick (KISS), Gene Simmons (KISS) or Brad Whitford (Aerosmith). We talked about Brent’s plans for this year, working with other bands outside SLASH feat. Myles Kennedy and The Conspirators, playing instruments other than the drums, and a few more things. Enjoy!

This tour with Slash has been going great so far. There’s been two sections. We started in the States on just a US run when the record came out and then we took a break. Technically, we’re kinda on what I call the official tour around the world now. We started in January, we’ve already been through Asia, Australia and now it’s the European leg. We’re out here until the end of March and it has been fantastic. The cool thing about the band today, with the brand new record out, is we have three records full of Slash, Myles and the Conspirators music and we’ve been playing all those songs. Of course, for Slash’s body of work we could easily pull some GNR, Velvet Revolver or his solo stuff, which we have done over the years. I’ve been playing with Slash for about 9 years. It’s great to have all this music just from this band alone to choose from. On this current tour, we’ve been playing a lot of the new record and this is my favorite thing about this band – we put a record out and we play every song the new album. A lot of times you make a new record and you add one song to the set and you’re just playing the old stuff, but with this band it’s very fresh and always current. I guarantee tonight we’re gonna add something to the set we haven’t played before. It’s just how we do it. 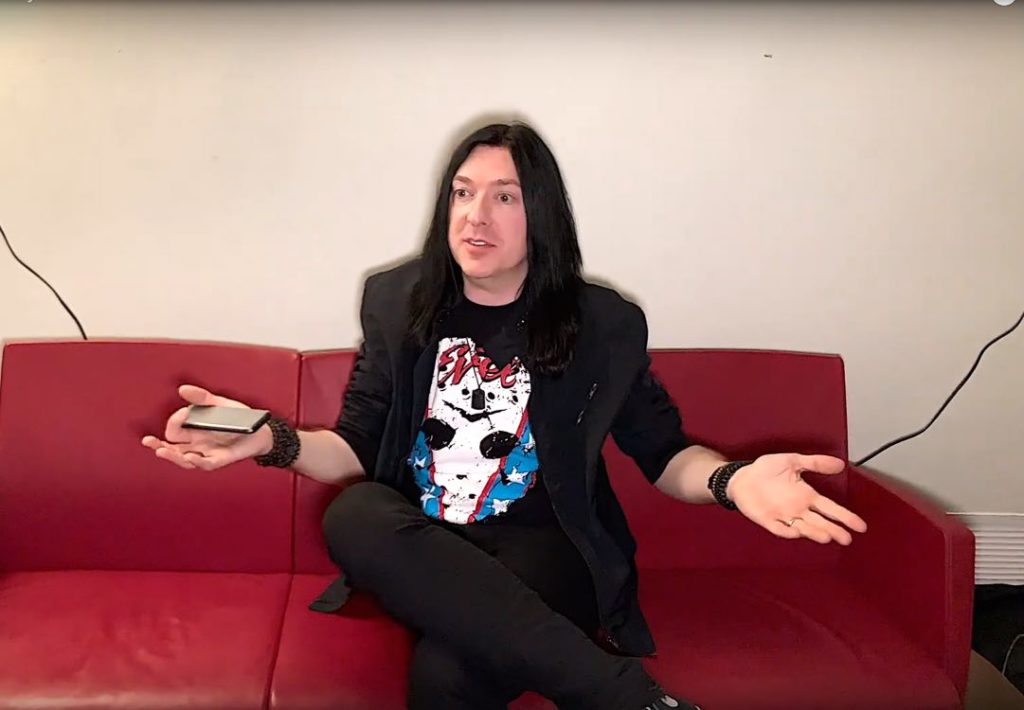 When we write a song initially, it’s created in the same environment of a live show. A lot of the songs that are now part of the albums were built from a jam on stage during a soundcheck so it starts that way. Then, before it’s recorded, we go to a studio, where we’re just jamming together. I guess that’s the old school of doing this because in the modern day you’re kinda writing songs with computers involved and looking at screens. That is effective for a lot of bands but in this particular band we do enjoy the time spent getting the songs worked out playing together. To play them live later, there’s extended sections to give a little room for Slash to play, but the structure of the songs is kinda similar. I don’t find it strange, like, it’s a whole different thing that we’re playing live. It’s quite comfortable either way.

I think the songs on ’World on Fire’ are a little more up tempo-wise than on ’Apocalyptic Love’. Maybe coming off tour and being still the high of coming right off a big tour and then coming right into the prepro of working on songs that probably influenced some of the music. We were like a very tight, well-oiled machine after coming off ’Apocalyptic Love’ and going into doing our next record. Even the new record [‘Living the Dream‘] has some effective uptempo stuff too, but we actually took a break. There was a full-on two-two-three-year break hiatus, where we had some separation time. I was playing with a bunch of artists and I think separation is good. Like, a time away and just the excitement of coming back together.

Since I was really young, I’ve always loved the fact that music has given me a social aspect to life. I grew up playing the piano, which is about you and the instrument. Later, as I got into rock music, someone played guitar, someone played bass, someone played drums and all of a sudden you’re playing together. It was that effective comradery with the kids in the neighborhood that gave me what I have now, which is traveling and playing music. The idea of having a chance to play with other people has been really beneficial. Slash is one of my main gigs and people know me as the drummer for Slash, but I’ve been able to play with so many different people. That has improved my musical vocabulary stylistically, not just playing the same songs. Prior to Slash, I worked with Alice Cooper, Vince Neil from Motley Crue, Gilby Clarke from GNR, the band Union with Bruce Kulick from KISS and John Corabi. I played with some bigger Canadian bands, where I’m from, before I moved to the US. I played with Theory of a Dead Man in the 2000s, so it’s a broad spectrum. I started on piano, I play guitar, bass and so on. As a multi-instrumentalist, I have a couple of crazy stories. I have played bass guitar and drums in the band The Guess Who, which is a Canadian band from my home town, so I’ve been a switch musician playing both rhythm instruments. I played bass with Slash on a fill-in in Russia at one point and my drum tech played drums ’cause Todd had a detached retina on tour. I have another band with Todd Kerns, where we do all our favorite Canadian music that we grew up on, loved and that helped create our career. That band is called Toque – a very Canadian word. I’m the bass guitarist there. I played with Brad Whitford from Aerosmith a couple of years ago. More recently, Todd and I have been playing with Bruce Kulick, who I played with in Union. We’ve been doing a whole set of KISS music, so it’s a very long answer.

There’s always the seeds planted from long-term relationships I’ve had with so many musicians over the years. I would say I’ve never worried about if my phone’s gonna ring when the gig’s about to end ’cause the gig never ends. I’m a musician that’s always playing with other people, I enjoy that. It seems like when I’m with Slash, I’m still getting calls to play in a record or play with somebody in between little breaks, so there’s never a dull moment. This current tour is until the end of August this year and Todd Kerns and I have some things planned into the end of the year. I don’t think too far ahead. I don’t think it’s healthy to start planning five years down the road. I don’t know. Is that the musician’s life style, where we kinda live in the moment? Maybe, but I’m enjoying it that way. I’ve literally been on tour since the mid 80s. If you can make a living playing music, your instrument, write songs, play with other people, and effectively have a career out of it, I think there’s some success in that. It doesn’t necessarily have to be the Rolling Stone front page. If you’re satisfied as a musician, that’s a great life.