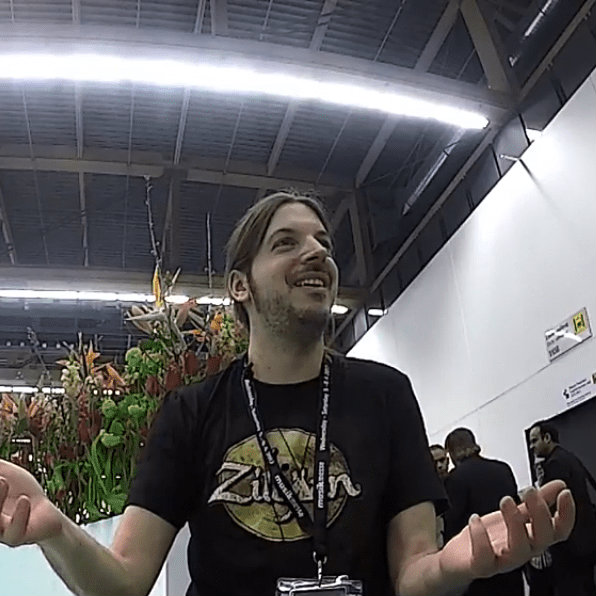 Beatit.tv: What’s happening musically in your life right now? What’s this year gonna be like?

Alex Landenburg: I just came here from a recording session. We were recording for my new band CyHra in Gothenburg, Sweden. That’s gonna be out in the fall. It features former In Flames members – Jesper and Peter, Jake from Amaranthe. That’s gonna be out on Universal Records in October, November, I guess. Meanwhile, I’ll be touring with Timo Tolkki from Stratovarius. I’m a little here and there.

B:What’s your approach to clinics? What’s the most important message you have to convey to those who attend?

AL: That’s a very good question. A few years back, it was all about advanced drummers and rally helping people to make that jump from ‘I know what I’m doing’ to ‘I wanna learn new concepts’. Now, I’m shifting my attention more and more to younger drummers because I just see the importance. The most important thing is to have kids in the audience and to show them how great that instrument is, how much fun it is to play drums. There’s always this thin line – you don’t wanna make it too technical, but it shouldn’t be boring for somebody advanced. So I’m trying to adapt a little. I have a couple of things that have helped me, for real. To be honest, it’s nothing I came up with on my own. It’s nothing I can take credit for. It’s mostly Gary Chaffee with his patterns books and linear approach. But if they don’t know it and I’m not claiming it’s my stuff… I tell them I got this straight from the books. This is what it did for me. To introduce people, especially metal drummers, who are very focused just on singles up and down. There’s so much more you can do with the instrument. You should really try to get this stuff happening. Some of the most important rudiments, some independence, a little bit of styles to be able to play a little jazz and latin to get a bigger outlook on the instrument. So that’s what I try to do. I also have a sort of my thing, which is similar to Thomas Lang or Marco Minneman. I have my own system of numbers. Those numbers assigned to certain licks in my head. So if you tell me to play 5, I might have a few licks I might do with 5 immediately. Same goes for 7, 8 , any number. For bigger numbers, you can just combine them. Then, you can play anything on top of anything. That alone gives you work for ten lifetimes, if you want. Because it’s modular. You can expand them, you can change modules or do what Gary Chaffee calls ‘stacking’. From going ABAB, you can go to ABBA, etc. It’s endless. It’s eye-opening. To us, it’s easy stuff as a concept, but to somebody who just thinks in terms of right hand-right foot or left hand-right hand together and then a fill, that stuff can be like: ‘Wow!’. That’s what it did for me when I was a kid, the Chaffee stuff. It’s amazing what you can do with an instrument. I’m trying to get that across. Of course, I get asked about blast beats, foot technique and stuff. I tell them what I can tell them, but I think that’s always a little bit hard because there’s no magic pill.

AL: It’s very individual and it comes down to practice. I can explain linear concepts and somebody can go home and, three to four days later, they can play some nice linear things that they’ve never played before. I can’t tell somebody that if they move their foot like that, they will play 200 B.P.M. four days later. That just takes work and work and work. I know a lot of people want the magic pill. You just cannot give it to them ‘cause it doesn’t exist. If you meet a person like that, you know immediately they’re not cut out for this. In a way. But on the other hand, it is a human thing. You wish it existed , but you just have to accept that it doesn’t. You have to find the joy in the way. You have to realize that it’s not about the goal, but this took me very long. A few years back, I thought it was about getting somewhere. Recently, I realized I will never get anywhere because my mind is always ten steps ahead. I’m arriving somewhere and I know that’s that but… Thinking abut the goal, you’re always frustrated because you’re always far from it. You will never each it.

B: Of course, you have to set goals for yourself.

AL: Exactly, but you have to understand the fun should be in just working towards that goal. It’s not about reaching it. It’s as if life was about dying. Life is about living and what you do up until then. It took me so long to understand it. You would not believe it. Same thing for me. Especially, given the fact that it’s never that one day you master the swivel technique at 250. It’s more like one day you just realize it’s happened already. You don’t know it along the way. One day you do it and suddenly you’re just doing it. That’s the way it works.

B: Exactly. You’re absolutely right. It’s all about the way, the journey.

AL: You have to learn to enjoy that but it’s the hardest thing to come to that conclusion. At least for me, it was. I’m still working on that because, to me, it’s like you work and work on your stuff and it’s easy to drive yourself crazy with it. So you need to learn to enjoy it.

B: We’ve probably discussed this next question a bit, but maybe you can expand on that.What do you get out of drums? What does the instrument do to you?

AL: Another very good question. Those really important things in life, you realize them when they’re not there. That’s what happens to me with drums. I get a lot of joy when I’m playing and practicing and I know I have to do it, but I really understand how much I need it if I don’t do it for four or five days, which rarely ever happens. It’s such a part of my life and what I’m doing that I just need it. I need to do it. It drives me crazy if I can’t do it. It’s stupid in a way, but that’s what it does. I need to do it. Of course, it gives me a lot of fun and pleasure in my life but it’s more like I just gotta do it. Another interesting thing is that lately, I’ve been trying to find some sort of meditative value to practicing more and more, the older I get. You know, going through an exercise and just getting lost in it. I had it when I was a kid, but I lost it along the way. Now, I’ve managed to get back to it. It’s very nice.

Drummerettes and Drummers- watch Alex Landenburg in the fourth part of our interwiev!