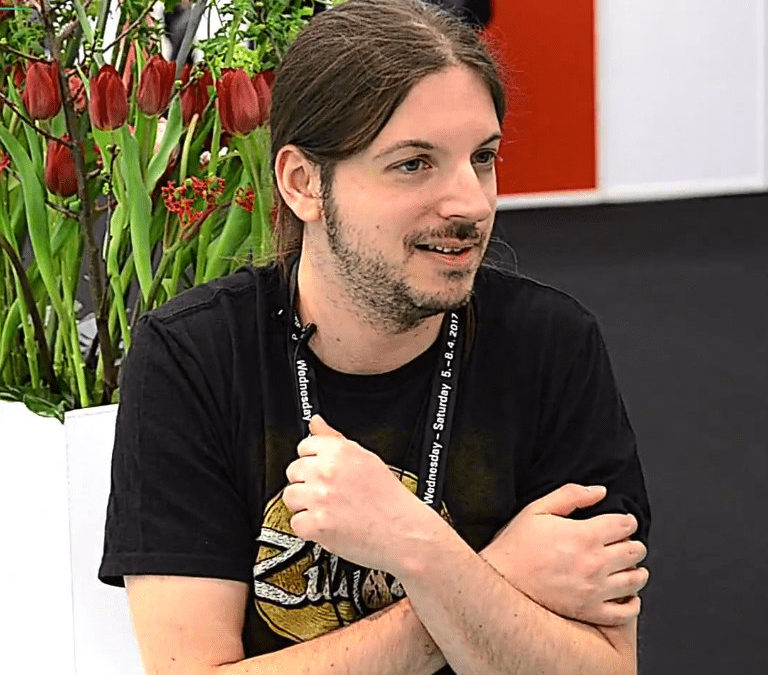 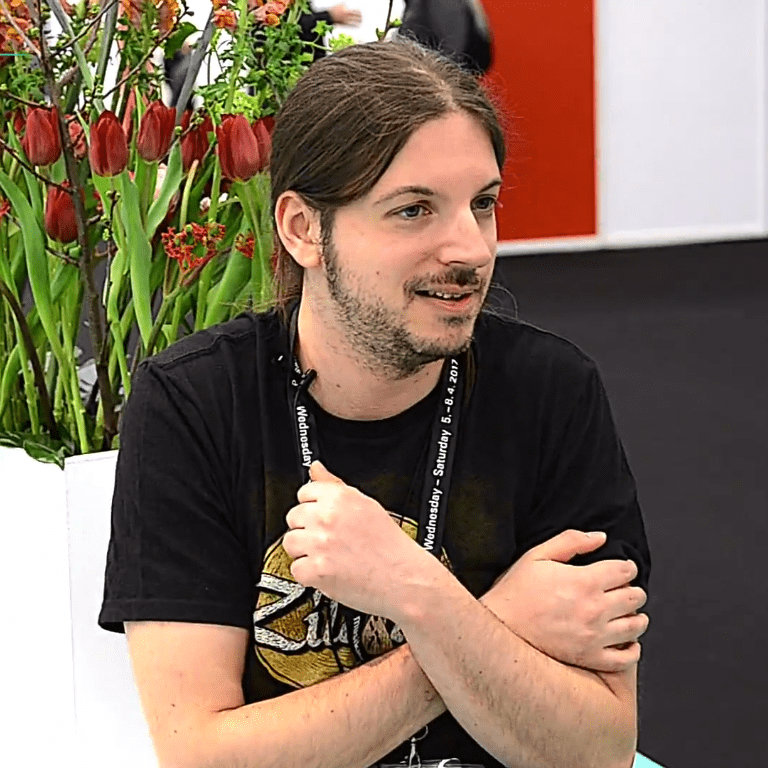 Beatit.tv: Let’s talk about your gear. Drums. What are they?

Alex Landenburg: I recently made a switch to Mapex. I mean, really recently. Like, for Musikmesse. Of course, I’d kept myself informed and I’d been following them for years and checked everything. Right now, I’m actually playing a Saturn IV, not even a new one, and it sounds amazing! Everybody’s freaking out, it’s a fantastic drum. I don’t know what the price is but it doesn’t really cost a lot of money. It’s a very affordable drum. Sounds incredible! But I will probably get a Black Panther, probably a Black Widow, in the sizes that I want to have.

B: Was it your first public performance with Mapex?

AL: My first public performance for Mapex, yes. Of course, I’d tested stuff. I had them in the studio and I’d been following them very closely for years. To me, it’s the one brand that really evolved. Like, nobody else. They really pay attention to details and this is just something I like.

B: What’s the configuration you’re using.

AL: It’s another thing. I find myself going more and more into the very basic 5-piece with toms on the bass drum. Seriously! As classic as it gets. One bass drum, ‘cause I always play a double pedal. The other bass drum is just for show. At Musikmesse you want to have something nice for people to look at, you want to present something. So they talked me into having a second bass drum. I said: ‘If I’m gonna have a second bass drum, I don’t wanna put the toms in the middle so we have to put a third tom on there’. So I have an 8-inch tom for look and symmetry. I’m perfectly fine, for the last few years, playing 22”, 10”, 12”, 16”. But depending on the gig, the stage size and everything, I just open the set-up. The thing is: when I look at a drum set-up, I see triangles. That’s what I actually see when I look at a set-up. They don’t change. I have the snare, the 12 and the 16 – that’s a triangle. I’ll make that shape when mounting the cymbals. If I add one here or there, it doesn’t really change so much.

AL: And, also, it’s a very helpful tool to memorize numbers. I learned that with Mekong Delta. It’s actually a thing for Mike Mangini. Say you have to play something six times but it’s in 11/16 and it’s against somebody playing something different. Highly confusing. You actually have a hard time already playing 11 at that tempo, and you’re supposed to know it you’ve played it 4 or 5 or 6 times. Highly disturbing. Or maybe it’s 7 times, which is even worse. What you do is you pick a triangle on your kit and you end the first phrase on the snare, the next phrase on the 12-inch tom, the next phrase on the 16. You repeat that cycle twice and you know that, by the time your on the floor tom the second time, this has been six repetitions. If I go one more, it’s the seventh, so you don’t have to count. You concentrate on the playing and you just have to concentrate on that one shift at the end, which is also a nice, tiny, musical change. That’s why these shapes make a lot of sense.

B: Gavin Harrisson says he hums the riff rather than count.

AL: Of course! Never count! People ask me about what time signature something is in and then I have to actually count it: ‘Wait a second. I guess it’s this or that’. You kinda know if it’s a natural time signature or an unnatural one. You know that but you could think it’s 10 but actually it’s 11. It’s a weird thing.

B: What are the skins you like to put on your drums? I wish I could give more definite answers sometimes. The problem is: I love single-ply heads. In a perfect world, I would play a single-ply head that lasts as long as a double-ply head, which they don’t. I’ve already used up way too many heads, even 2-ply ones. So I just can’t go for single-ply skins. Economically, on a tour, it’s just not possible. Nobody would send me that amount of heads. They would say: ‘Alex, no way!’. So the perfect all-around head would be a clear Remo Emperor. You can’t go wrong with that. I really like Remo Ambassador X. They’re single-ply but a little thicker and it almost works for me. I can get them to last a little longer maybe. So I will use that on the toms. On the bass drum – Powerstroke 3. Kinda boring, but it works for me. On the snare, I like coated Ambassadors, but live, I would go for an Emperor X – the one with a dot.

AL: My favourite thing about the drums. I love cymbals. Here’s the thing: I’ve always loved Zildjian cymbals. I’m the happiest guy in the world now that I’ve made that switch. Of course, I played another brand before. It’s like with cars. Audi, Mercedes, BMW – those are all great cars. It’s not like one is necessarily better than the other or anything. It’s just a matter of feeling. You have some sort of attachment to a company, you believe in what they do. Especially with Zildjian, there’s no company like that to me in all percussion. I mean, it’s the oldest company in America, the oldest family-run business. I said it to them the other day and they didn’t know that the great German composer Richard Wagner insisted on Zildjians being used specifically for his music. They’ve got a history like no-one in the world. You’re part of that history if you have their cymbal. You’re, like, in a line of long history. So I love those. I’m using the K Custom Hybrids. Again, it’s a little untypical for metal. You would think… Of course, I told them I might actually need heavy A Customs and they sent them to me. But I love the way these K Customs open up. I guess, in my taste, I’m not a typical metal drummer. As I told you, I love Steve Smith and stuff. I wanna go for a cymbal that is musical, opens up even at a low volume and doesn’t distort when you go higher. They do all that for me.

AL: Unbelievable! And the ride cymbal… What’s it called? K Custom Hybrid 20”? I don’t know if it has some additional words in the name. I have to look at it again. Maybe it’s just that. The thing is: I never thought something like that existed. It’s a perfect ride and a perfect crash. It’s not like an OK ride and an OK crash, which usually those cymbals are. The bell just cuts through amazingly and then you crash it and it’s a perfect crash. It saves you all that space. You have it there and you can play the whole show on that thing. Unbelievable!

AL: Same thing. Well, I’m not really using a splash on its own right now. I have them in stacks. I’m trying some combinations out to see how they work for me. I’m using a K Custom china here, but I also use a regular K a lot. I have an 8” A Custom splash. That’s like the splash of all splashes. It’s just there and it’s perfect. I actually like the A Customs – the normal ones, not the heavy ones. I like those too, but the normal A Customs are fantastic, too. I just fell in love with the K Custom.

AL: Vater. This is a cool thing. I’ve always played Vater, from early on. My teacher gave them to me and I stuck with them. I remember, at Messe, I was a little boy and Alan Vater gave me a pair for free. We talked a little bit and that was so sweet. I’ve always felt attached to them. With Vater, I actually waited a few years and I kept buying sticks until I actually was able to get a deal. I’d had offers but I didn’t want them. That’s because sticks… You’re actually playing with that stuff.

AL: Yeah! It’s really the stuff that you actually play with and have in your hands. It’s something you gotta trust.True.

AL: I’m playing a 5A Stretch. It’s a little thicker, longer and heavier than a 5A, so you get the feel of a 5B, but you have more reach. At the same time, they’re a little thinner and it works for me. Technically, I can play a little more delicate things with them. They don’t break. They’re just fantastic!

Drummerettes and Drummers- watch Alex Landenburg in the third part of our interwiev!