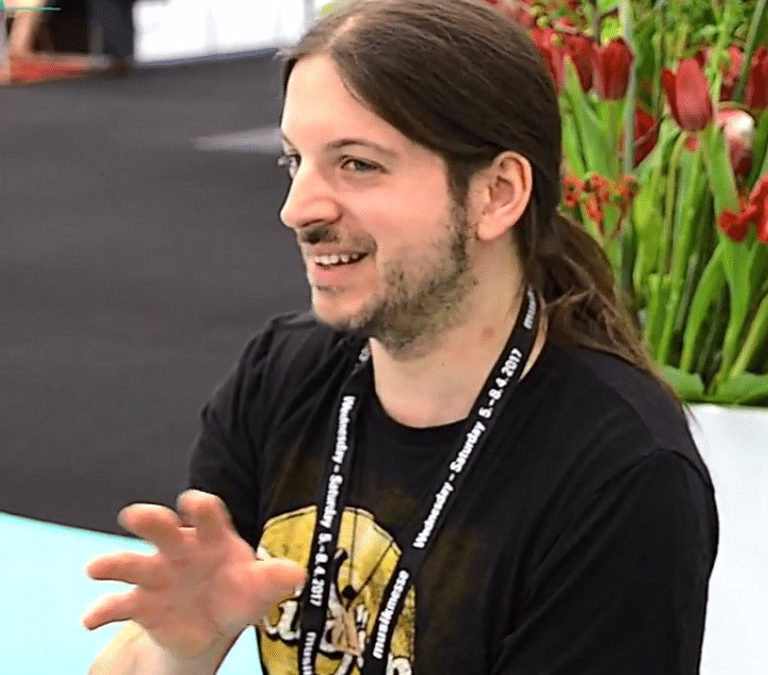 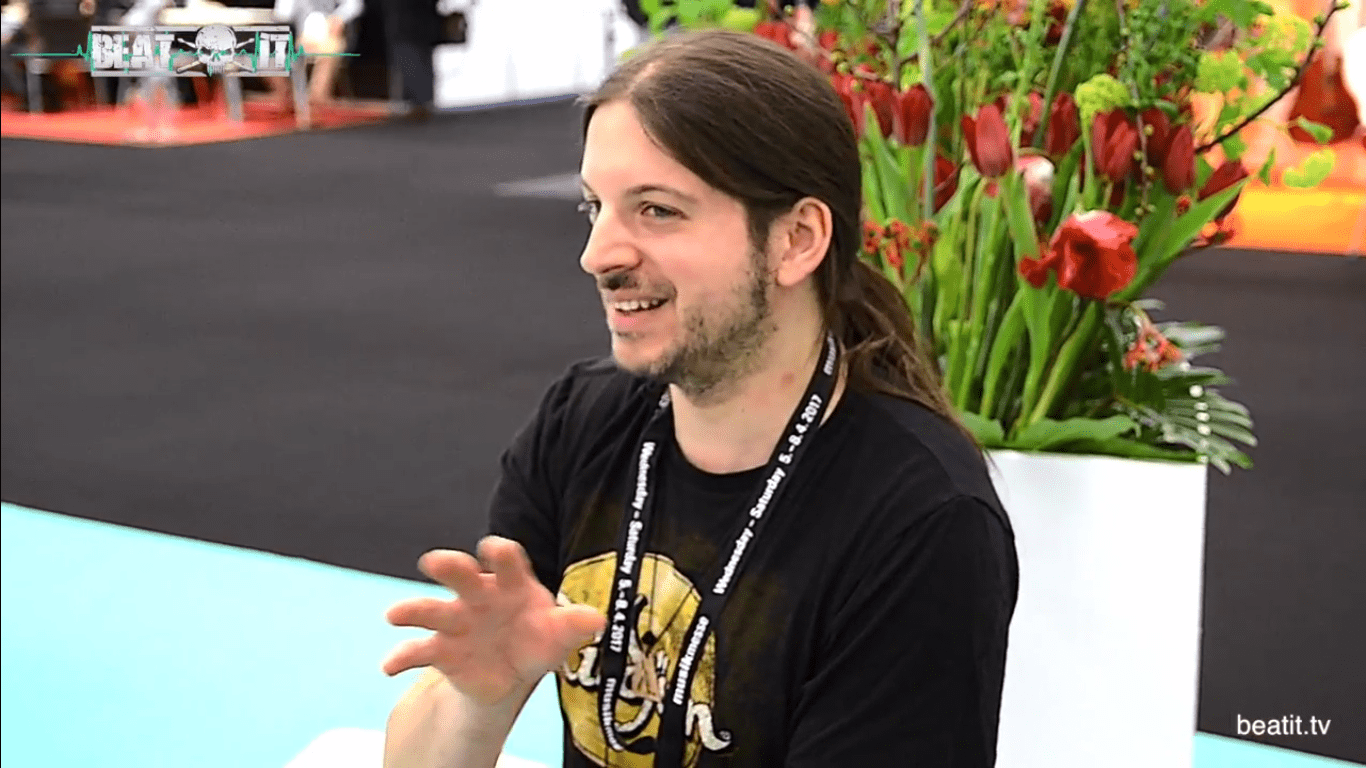 Beatit: What was the gear you were using at the time?

Alex Landenburg: My first drum was a weird brand. I don’t even remember it’s name. I remember I just put a Pearl head on it ‘cause I thought it was so weird. It was just this no-brand thing. The first cymbals I bought we Zildjian Scimitar.

B: I had those, too. Still have the ride.

A.L: Yeah, entry level Zildjians ‘cause it was all I could afford at the time. It’s always the same thing – I sold the kit when I was maybe 14-15. 13-14, actually, and now I regret it. I wish I had it. It’s the same thing for everybody. And then, I went on to get my first proper kit.

A.L: It was a Tama Rockstar. Double bass. That was amazing! A couple of cymbals more…

B: At the time, Tama was the rock and metal company.

A.L: Of course! Nick Menza and Lars had this Tama thing going on. That’s a great company! They know their stuff.

A.L: Exactly! All of them! That really worked for me as a kid.

B: What was the first pro kit you ever owned?

A.L The first really professional kit… Actually, a friend of mine built it. He had a custom company. He would get Keller maple shells like DW used to do back in the day. That was the first proper, maple hi-end shell kit I’d had and I used it until my endorsements started. That was a big step up in terms of sound.

B: Let’s talk about your first recording experience. That’s kind of like losing virginity.

A.L: Of course. Again, it’s a little tricky. The cool thing is we started recording as kidos with a Yamaha 8-track tape recorder. It was a Yamaha MT8X or something. So you had a regular tape and you could record eight track on it. This is another thing: I think it was brilliant because it was unlike today. You couldn’t edit anything so we had to try to play our best. We had to bounce things so we learned a lot about recording at a very young age. Of course, that was not professional but it prepared us for something. A lot of my friends studied at a place called SAE – like a recording facility. They had to record bands as assignments for their studies. So, even before things got professional, we were able to record at professional studios. I think that preared us quite a bit for the first real recording sessions later, which were not so traumatic.

A.L: I had a build-up. At the time, I was already a firm believer in metronome practice, so it wasn’t like you hear from a lot of people: ‘Ok, here’s the click!’ and you’re like: ‘What?!’. That worked well. But, of course, I had my share of difficult recording situations in the begining but you learn so much from those experiences because you’re under the microscope. So you realize: ‘Ok, I may be flamming here, I’m dragging here, speeding up there’. It’s a great experience.

B: So you should recomend that to people.

A.L: Absolutely! That’s something I really recommend to people. Here’s the thing. I started recording my practices and zooming in on details. However, there is a danger to that because you should not rely too much on your vision. I see that with a lot of the producers. They just zoom all the way in and look at the grid. I always tell them: ‘Please, listen if it sounds good first! So it’s cool to get in there for yourself and say: ‘OK. When I’m doing this fill or going from the floor tom to my left cymbal, I’m a little late’. So I know I’ve got to focus on that or do it differently. But then, you also have to learn to trust your ears again because it’s really easy to get caught up in the visual and it’s not a good thing.

B: You’re absolutely right. Let’s talk about recording. When you first started, the computer was already present in the studio but since then the technology has advanced immensely. How do you approach the technology? Are you a one-take guy or at least a whole-take guy? Do you record in segments just to maintain the power, the energy…

A.L: And the focus. I gotta be honest. I get it that people say they do the whole take because they get the flow and stuff but, personally, if I go in with the ‘I-gotta-do-the-whole-take’ mindset, then I’m playing it safe. That’s because it’s more about not messing it up and delivering this whole take. I think this comes from a time when people didn’t have to play the kind of stuff we play. In the 70’s and 80’s studio time was expensive and you were playing normal beats in mainstream pop music. Then, this approach makes sense. But if you’re trying to record something interesting, progressive, whatever – I don’t think you should limit yourself like that. Of course, I do like a run-through of the song. Then, we listen to it together with the people that I’m recording for and they say: ‘I like this groove” or ‘I like that kind of fill’ then that’s what I’ll go for for real. I hate it when the segments are like 2 seconds. It’s not like that. It’s a verse and a bridge, or a prechorus and a chorus, or whatever that is. That’s the kind of stuff I like because you can focus and really concentrate on things. I really like that.

B: Especially, given the fact that you’ve recorded, which is Mekong Delta, Rhapsody, requires lots of energy.

A.L: Lots of energy and focus.

B: It’s really hard to maintain that level.

A.L: Exactly! Usually, by the time you record it, that stuff has been written for a couple of weeks or a month. It’s a different thing if you go on tour. Then, you practice for the tour, you have rehearsals, you play. Then, I could probably go in there and do quite a convincing one take but even then I wouldn’t like it. I know that! But I could do it. Normally in studio, this stuff is new, you’re working on it and stuff and you’re thinking: ‘Ok, I think I can do it but I need to focus’. I really prefer working that way. Absolutely!

B: Basically, it’s about how you use this tool that’s technology.

A.L: To be honest, that’s the thing with anything. It’s never the tool or the technology that is the problem. The problem is how we use it. Making use of atomic energy is not a problem, it’s a fantastic advancement in human development. But then, you make a bomb out of it and this is unnecessary. You should use it to make energy, not a bomb. It’s what we do with it and that’s the danger. We can be perfectionist. Now, we have tools at hand that can easily make it 100% perfect. We have to stay away from it because it’s not musical. It’s funny how the thing has changed. Back in the day, my goal was to be as perfect as possible. Now, my goal is to sound as human as possible when the recording is done. That’s because I’m afraid that when everybody’s done their stuff and edited shit, suddenly, it sounds like midi-programmed. You can tell them whatever you want but then they’re alone in the studio and think: ‘Ok, the guy is out. 100% quantize!’. You come back the next morning and you’re like: ‘Wow!’. Because you like to believe that you play like this so you’re like: ‘I guess I played like that! Wow!’ and are pretty amazed at yourself. But deep inside, you know it sounds a little plastic so I hate that. I try to talk everybody out of it as much as I can. On the new recording which we did in Sweden with my new band CyHra, we managed to really have my human feel. We never quantized anything, certainly not a hundred per cent. Of course, you move a note every now and then because you might have a take that’s close to perfect and one note is a little off but you want to keep the energy of the take. Then, you move that note a little bit. That’s been done since early on. They would just cut the tape. It’s not like we are the losers today because you have to move everything and back in the day, everybody was just like incredible heroes.

B: And if you do that, it means you have no talent.

A.L: It’s easy to get caught up in being hard on yourself: ‘Oh my God! I have to move everything!’. No, no. The problem is if you move something a little bit too much, suddenly something else starts to sound off because you have relation between the notes that you kind of make up yourself. In that thing, they make sense. Then, you start moving stuff and it suddenly doesn’t make sense anymore. That’s why you should try to stay away from it as much as you can.

Ladies and gentelmen, Alex Landenburg in the second part of the interview for Beatit.tv!