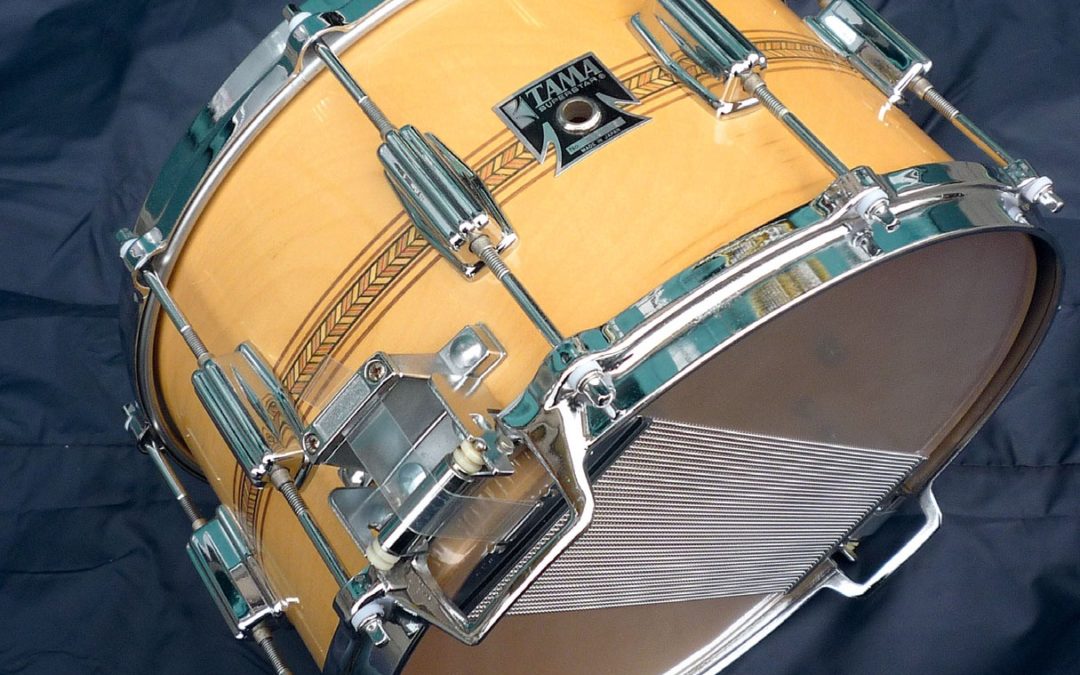 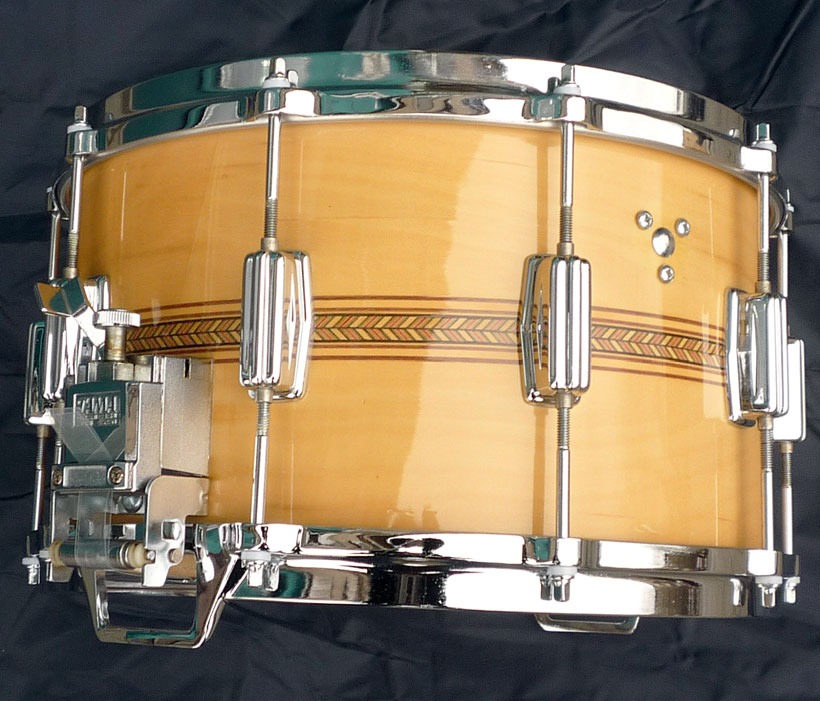 There comes a day in every person’s life when we suddenly realize that our perception of the world has changed. Benny Hill and his bald mate don’t make us laugh the way they used to while the pseudo-intellectual jokes of Woody Allen stop being irritating and start to attract our attention. Tasty fast food shown in super colourful ads and commercials mean nothing compared to Grandma’s home cooking and the dullness of daily existence brings back memories of our school days when routine was a completely unknown term. 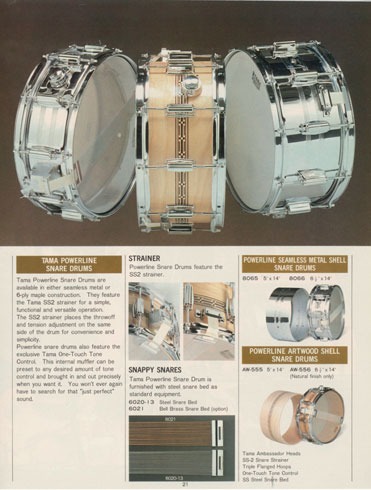 It is the same with instruments. With time, most drummers take a 180 as far as their kits go and strip them down to the absolute necessary minimum. Fan-like cymbal formations and hill-like tom clusters are replaced with jazz sets and a basic set of cymbals, while extended, heavy racks give way to light stands. The individual perception of sound also changes, which stems from a number of factors, not necessarily the kind of music one plays. What sounds excellent to us today doesn’t mean it will remain sounding like that for the rest of our days…

Some time ago, I decided to try something new, something I had never experienced before. I wanted to shape my sonic preferences from scratch and I chose to start with the snare drum (which, after all, is the heart of any drum kit). I sold all the snares I had accumulated and bought one off a friend. This new instrument is rare and exceptional in many ways and it is what I’ve been focusing my attention on for the last 4 months. 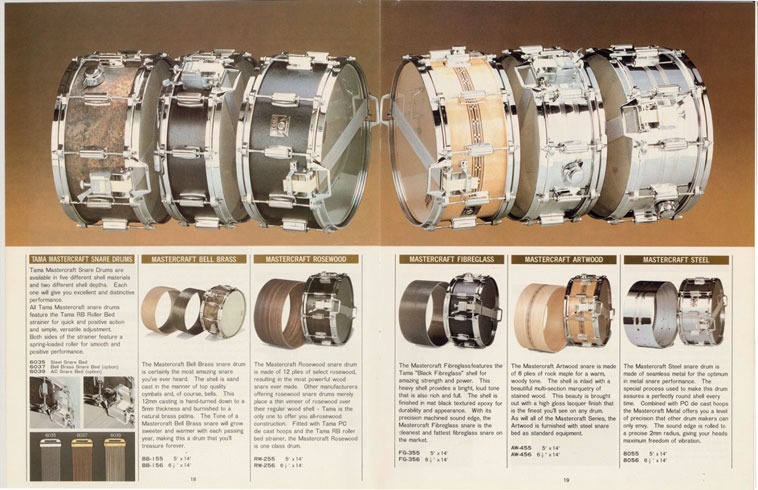 The Tama Mastercraft Artwood 14″ x 8″ is what this article is going to be about.

THIS IS WHERE THINGS GO MOTLEY…

The snare I bought appeared in the “General Cataloq” in early 1980 when the then latest Tama Super Art snare series was being introduced (the one Billy Cobham helped develop). A few months later, the entire line was renamed to Mastercraft and appeared in the new catalogue from that same year. The specs remain unchanged, it’s only the name that becomes more monumental.

That was the first catalogue where Tama presented the idea behind the Mastercraft line: an exclusive snare drum collection made from different, often expensive materials, e. g. bell brass and rose wood, which was a novelty at the time.

The interesting thing is that only six months later the “Digest Cataloq” featured the Mastercraft line with DIFFERENT, high tension lugs and colours (e. g. the walnut finish), only to return to the original state (early 1980) after another six months (the 1980 “General Cataloq“). 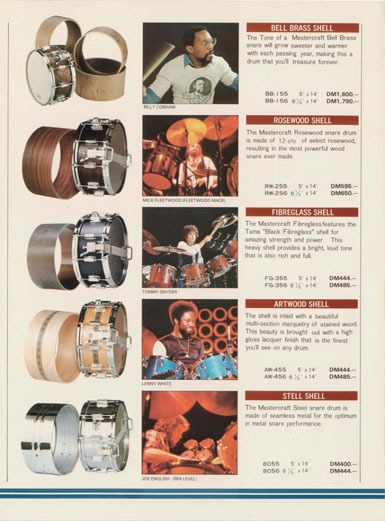 This bizarre situation was explained to me by a Tama forum member from the US. Between 1979 and 1983, Tama were going through an adjustment period resulting from the acquisition/takeover/division of the Camco company by the fledging Drum Workshop (DW) and Tama. Many instruments made in that period were never catalogued, which meant they either didn’t appear in any brochures or they did, but only locally (e. g. in Japan or Europe). Many actual instruments were made from whatever the factory had at hand, which wasn’t necessarily in line with the manufacturer’s official specs. All the untypical instruments from that era, such as Tama Artwood snares based on Keller maple shells made for Camco (thin plywood + reinforcement rings – unusual for Tama), are currently very rare. When becoming an owner of a snare like that, one should be aware of its uniqueness.

What is more, my snare was described in all catalogues as maple shell. Nothing could be further from the truth as in fact it is pure birch. The same Tama forum colleague said: “Many 1980 catalog descriptions significantly bend the truth“. He also explained to me that my snare is made from birch, regardless of what Tama wanted to sell to musicians at the time.

Under the Mastercraft name, those snare drums were presented until the late 1980s, when they got replaced by the maple-shell Artwood and Artstar Custom. That was when the Mastercraft line disappeared from the company’s production line. 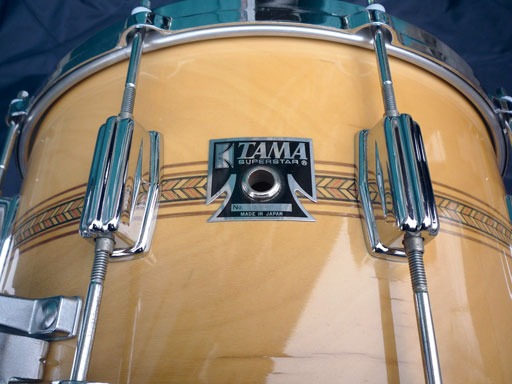 I’D PREFER A MAPLE SHELL, BUT…

Beggars can’t be choosers, especially at this price.

I eagerly proceeded to restore this giant’s glory. I started with cleaning the thing (which the previous owner hadn’t done in some 10 years). The lug inserts were all rusted (which seems to be old Tama instruments’ affliction), so when the third hardware store owner in a row told me they didn’t carry such stuff (the charm of old threads), I decided to clean them myself using some Coke and sand.

The shell also received a thorough cleaning, the lugs and the throw-off were brushed and dried. Already during the cleaning process, I noticed that the snare is very well crafted: the shell, the chrome and all the hardware elements are made from top-quality materials and, most of all, very thoroughly. Even the smallest hole in the plywood was drilled with highest precision and expertise. ME LIKE! 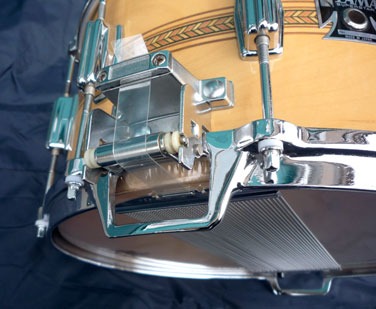 Despite the lack of a super-duper strainer made from an alloy used to make space shuttles, light, single-point lugs and a hundred thousand vent holes designed according to the Mayan calendar, the shell resonates the way a wood shell should. Over 30-year-old, seasoned plywood literally sparks under the sticks. Once again, I found confirmation of the simple truth that old is gold (or at least more durable).

I put classic Remo Ambassadors and some no-name, 42-strand snares on (I recommend that if you haven’t tried it out) and headed off to my rehearsal space.

It is the snare’s main asset. The shell is deep, mighty and makes one think of thick, low-end sound (quite rightly so). All its uniqueness lies in the fact that the shell’s natural register would be mid range rather than low end. Thanks to this feature, it can easily be tuned to sound like a classic 14″ x 5.5″ or even something more shallow. Obviously, to say that a 14″ x 8″ snare could be tuned to sound like a much shallower instrument (without the slightly deeper “tail”) would be an exaggeration. However, the depth coming from the size of the shell only adds to the quality of the general sonic impressions. To cut a long story short, I have become an owner of a few snare drums in one, which makes it a bingo for me. 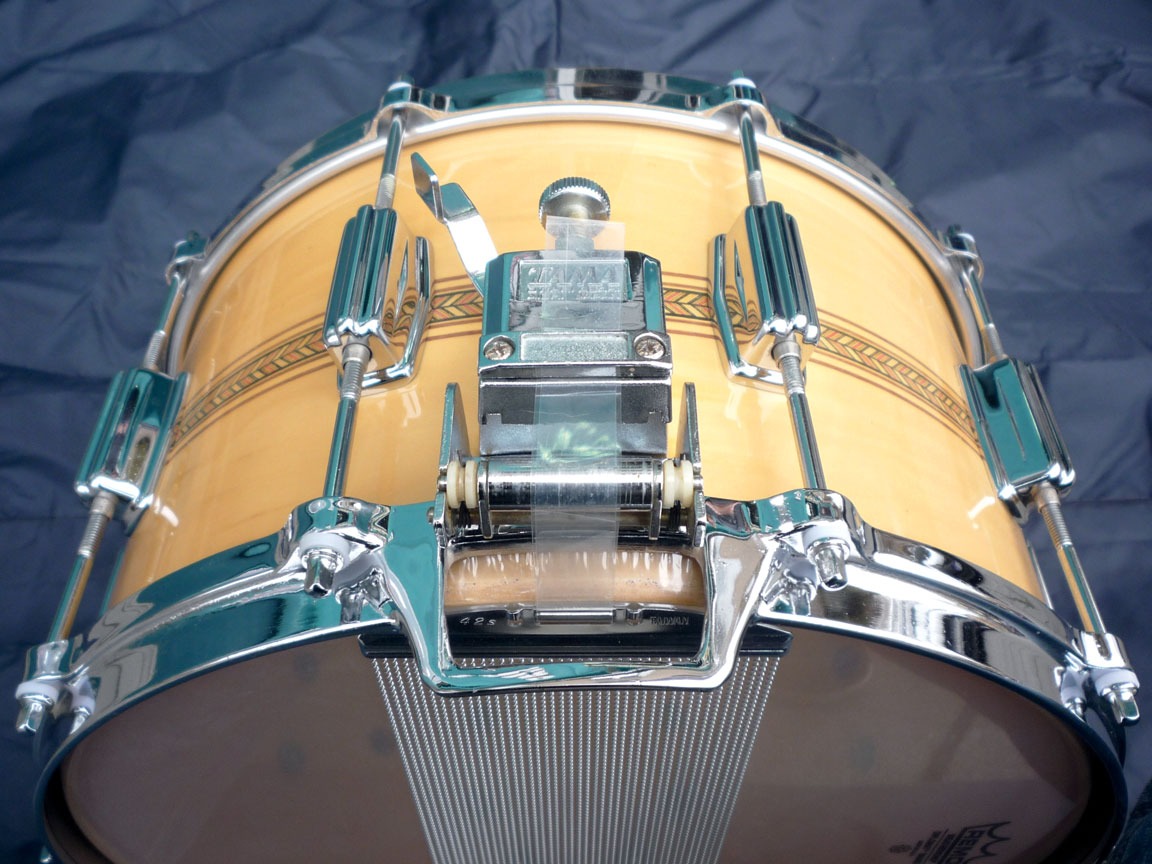 THEY DON’T MAKE ‘EM THE WAY THEY USED TO

That is the sad truth. Ever since the Hyperdrive type craze started (shallow toms and deep kick drums), the availability of deep snares has been steadily decreasing. The only widely available models are Mapex MPX 14″ x 7″, DDrum Vinnie Paul Signature or Tama Artwood 14″ x 8″. The other manufacturers are definitely walking away from deeper shell sizes. In my opinion, it is a mistake and it puts a limitation on each drummer’s way of expression. 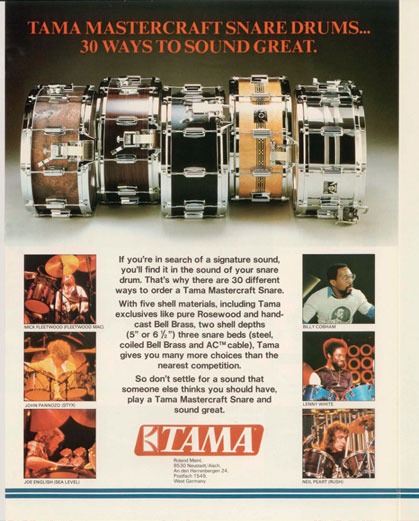 There should be at least one “fat guy” in any drum maniac’s arsenal. There’s a million good reasons to buy one and there’s always one good reason not to do it – money. On the other hand, you can always cut down on beer consumption 😉

My snare drum’s chequered story can also serve as an interesting example of the marketing tricks companies used in the 1970 and 80s. Confusing or misleading specs in catalogues (which were the only source information back then!), a lot of models on the market but not to be seen in catalogues, plenty of prototypes, materials used because they were at hand but never documented. 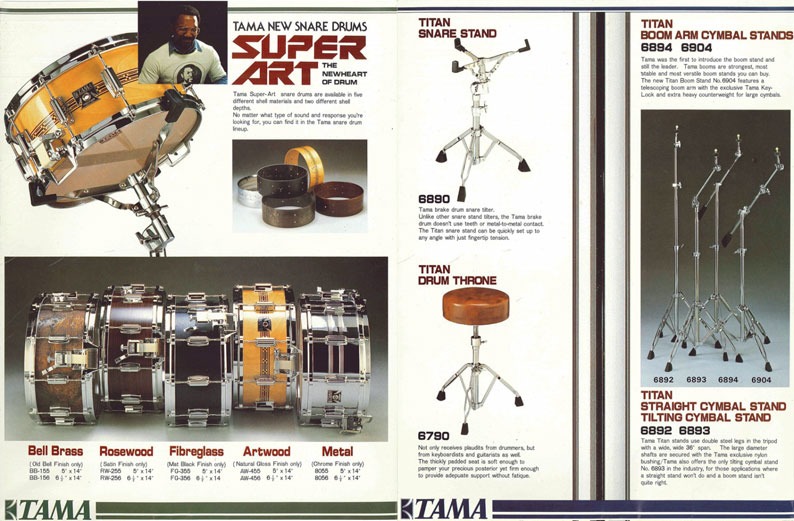 Ironically, that’s why the world of vintage drums is so amazing. 30, 40 or 50 years ago, nothing was as obvious as it is today. Facts of little importance from a manufacturer’s life, such as opening a new shop or the birth of the owner’s second child, would result in some gear-related tidbits, which can now be owned by any of us. There was no Internet and people would educate themselves by experience combined with other people’s opinions.

You can laugh at me for being excited about just one snare, but please bear in mind that each instrument has its own life story which is worth getting acquainted with, even though it may not be as interesting as Forrest Gump’s.

Also, it is good to be aware of the phenomena that have influenced today’s perception of sound and gear. All present novelties are hardly ever genius ideas coming from all-knowing engineers. They are more the result of a natural development of sound perception and the needs of modern drummers. To say nothing of the fact that a lot of the cool inventions of today are merely copies of solutions invented 50 – 60 years ago…