HOME > TESTS AND REVIEWS > SNARE DRUMS > A Snare To Write About: Beverley Cosmic 21

A Snare To Write About: Beverley Cosmic 21 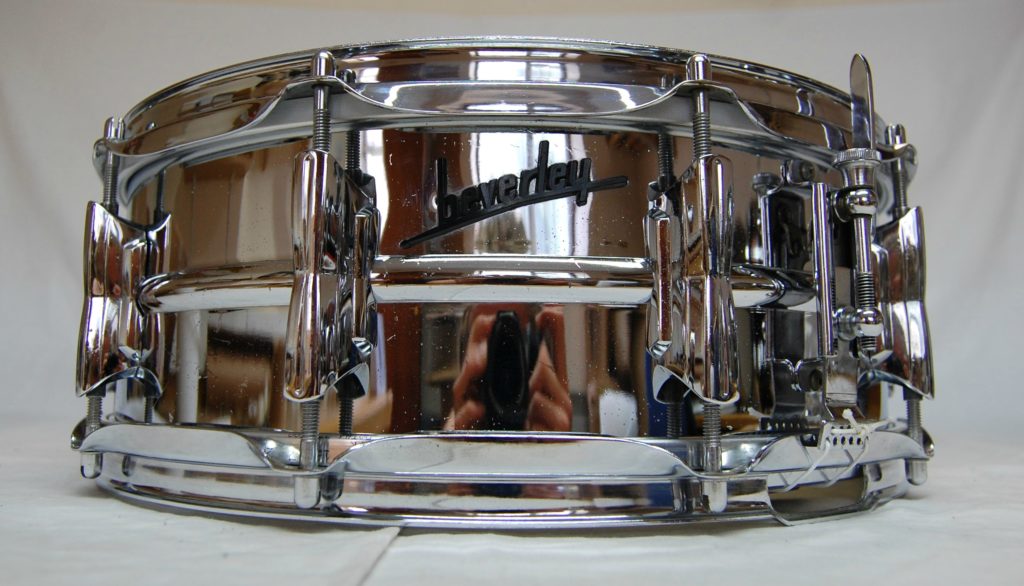 They say (at least in my country) that one can either be lucky in cards or in love. That is, you can’t have it all. The conclusion is simple: you are either born lucky or you aren’t. Some have it made and some have to work really hard to achieve a minimum.

My story is very much like that. My German-car-buying history is not a tale of happiness, but I seem to be a vintage drum magnet. Constantly. I’m like a piece of flypaper hanging over a grocery shop counter on a hot day. Unfortunately, it is absolutely impossible for me to keep them all…

I bought this Beverley snare drum from a friend who legally trades second-hand gear via auction services. I payed a small amount for it, which was the main reason to risk the purchase sight unseen. Had it been faulty, I would have at least had something to write an article about. Something attracted me to this steel shell from the very first moment and I have to say my sixth sense for drums did not fail me. Having bought a plain steel shell snare, I became an owner of something far more exceptional and interesting.

WHAT’S IT ALL ABOUT?

Beverley is an English brand which is completely unknown to Polish drummers. Just like Dallas, Ajax or John Grey, it was once among top drum makers in Great Britain. Obviously, it was Premier who had been the strongest player in that market for some 20 years before. However, there were a few smaller shops building drums that were equally good but in smaller quantities, which makes them more interesting and attractive today. By the late 1970s, Premier had taken over most of those small companies incorporating their technical solutions to its own products. Those shops that somehow resisted the hostile takeover soon went out of business.

The way my British friend named Beverley “Cosmic” is constructed is nothing unusual. A 14″x5″ shell (used on all continents in the 1960s), an old-school strainer and an internal muffler, which was omnipresent in snares at the time. 10 tension rods on each side, heads tuned with a crewdriver. Nothing crazy, just a medium level vintage drum. It was a bargain, so I bought it. Simple as that.

Old drum gear can sometimes be a very nice surprise and that is exactly what happened in this case. I would say Beverley Cosmic 21 is…a cheaper version of Ludwig LM400 – the legendary Supraphonic. The chrome over aluminium finish, the double-ended lugs, the classic strainer, the internal muffler, the seamless shell – Ludwig features all of these.

One of the characteristic features of Beverley snares made between 1960 and 1976 is the “handwritten” logo on the shell. These days, very few manufacturers use this type of nonchalant looking font on their products (Ford, Dunnett, Premier). That’s a real shame because it adds some class to an instrument’s design.

If Internet users from other parts of the world are to be trusted, the nickname “21” stems from the price as the snare cost 21 pounds in the 1960s. By today’s standards, a rather symbolic amount. I have also read articles saying that most British drummers used this instrument at the time because it sounded good and didn’t cost much.

Premier HiFi (the company’s flag model introduced a few years later) was built on the basis of the Beverley Cosmic.

The Beverley kits that I have come across featured shells similar to Premier’s from that period of time – made from birch or mahogany, with enforcement rings. Only sharper lug shapes suggest to an expert’s eye that it is not Premier. Once, Avant Drum Shop had a mahogany Beverley kit with beech reinforcement rings. 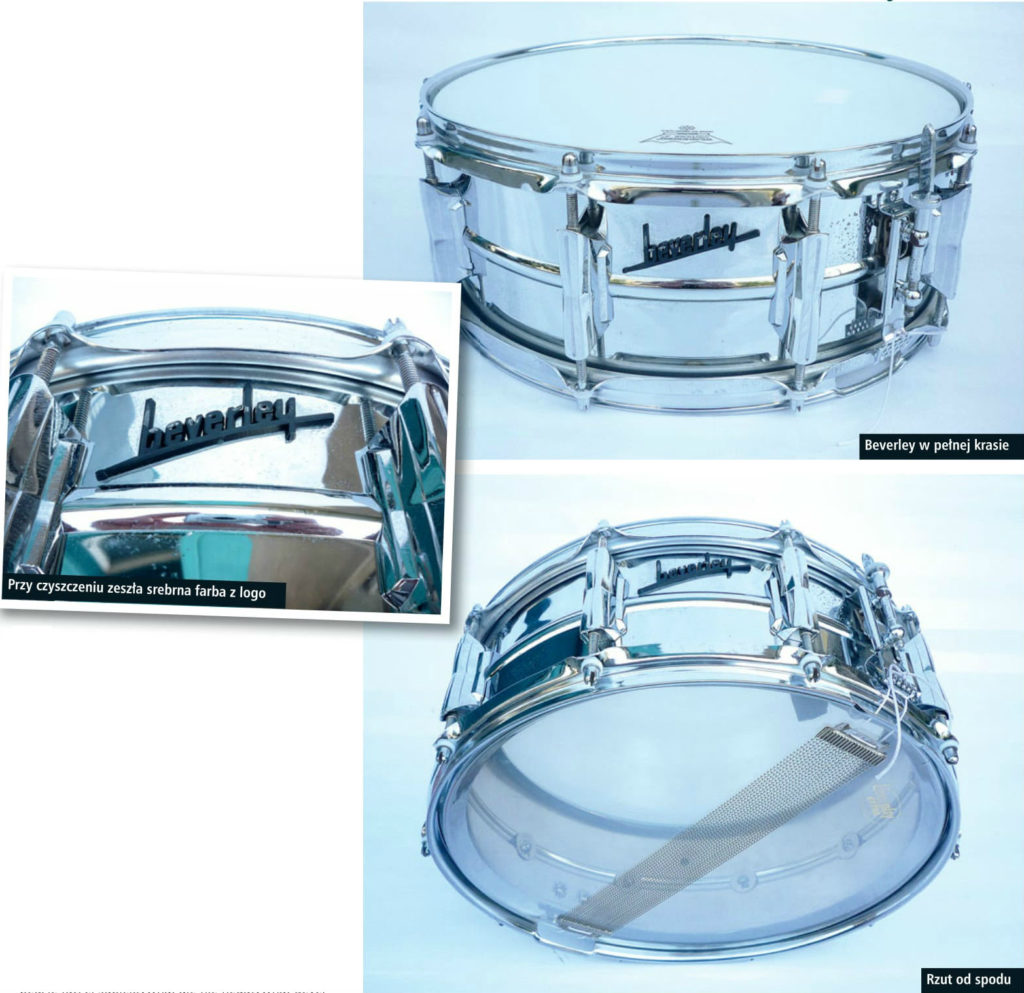 …is a matter of personal taste, obviously. For quite some time now, deep and more fully resonating shells have been my weapon of choice, so my opinion will be rather subjective, but certainly not negative. The Beverley Cosmic is wonderful, funky and Stanton-esque sounding. It is also fast and succulent (as we in Poland like to describe this sound characteristic). The instrument responds to the slightest changes in articulation. To cut a long story short, very similar to the Supraphonic. Maybe a tiny bit less clean-sounding, but much cheaper. It should satisfy anybody who likes fast response and distinct ghost notes, which is perfect for playing rudiments. The tremolo it produces could serve as a model for orchestral sound.

The Cosmic has a beautiful, bright and penetrating tone, which is very exceptional and can be heard only in aluminium snares (maybe apart from Ludwig Acrolite, which is a bit drier and more toned down).

How many Beverley instruments are there in Poland? Nobody can answer this question. I know of two kits and a snare.

Are those truly vintage? Yes and no. Yes, because they are old, beautifully crafted and basically indestructible as all hardware elements had tree layers of chrome (Diamond Chrome), which makes them look like new even after 40 years. No, because it’s not old Gretsch, Ludwig or Slingerland – renowned American brands which are the most sought-after.

Truth be told, having bought a Beverley, one can own an exceptional instrument which will give the player a lot of joy from almost all styles of music (apart from metal), and achieve it for a small amount of money. It doesn’t matter if it really is a “true vintage” instrument or not. As long as cleaning the chrome elements and the wrap as well as putting on new skins brings the same kind of satisfaction, nothing else counts.